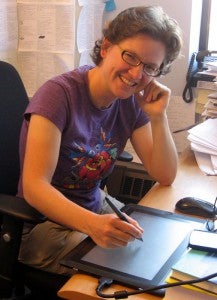 CU Boulder Mathematics Department Assistant Professor Kate Stange won a 2014 ASSETT Development Award to make math videos for Linear Algebra and other classes for flipping the linear algebra classroom.  Stange used the award to purchase a WACOM tablet.  "The tablet is fantastic," says Stange.  The videos that she has made so far with tablet and Camtasia software explain core concepts for Discrete Math students.  Stange uses a stylus pen to draw on the tablet in Autodesk Sketchbook software.  She says drawing on the tablet is:  "... just like a mouse, except your hand has better control if you want to draw something.  You can sketch much more naturally."

Stange records her drawings in Camtasia software.  She can accelerate the drawing videos and records herself explaining the concept.  This way, Stange says that she can show much more visually in less time, than if she were drawing and writing equations live on the board in front of students in class.  Stange says:

In class sometimes I find that I'm lecturing and I want to put something up on the blackboard, but it takes too long, so I don't do it.  This [tablet and software] is perfect for that because you can draw it [ahead of time], and speed it up ... Then you don't have to use classroom time for it.

Now, she is using more and more class time to lead students to work through concepts that they studied for homework.  "For me the visual is a big component of learning," says Stange.  She says when students can watch a video that explains a core concept for homework that frees up class time to build on core concepts with students.  Stange has implemented Think-Pair-Share Clicker question and answer time, group work, and manipulatives into her lecture hour.

The tablet belongs to the Math Department.  Stange hopes that her first videos will inspire more Math faculty to make their own videos!  "Once you've made one you can use it forever," she says. "It's really pretty fun."

Watch the first videos that Stange created with the Wacom tablet here: