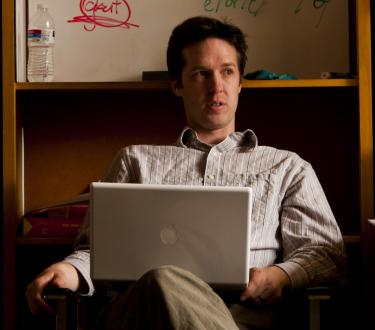 CU Boulder students nominated Linguistics PhD student Steve Duman for an ASSETT Award of Excellence as an Outstanding Teacher in the Use of Technology.  In their nominations, students wrote that they enjoyed Duman's PowerPoint presentations in his class, Perspectives on Language, Linguistics 4100.  In Linguistics 4100, Duman presents a critical examination of a few selected language topics, including the relation between language and thought.  In their nominations, his students wrote that his presentations were, "... engaging, efficient, memorable, and enlightening."

PowerPoint is just one launching point for Duman's class "... to get the conversation going," he says.  Duman says that he sees his PowerPoints as stories in which he tells students, "... something to get them interested and involved in the material and excited about what's coming next."  To help students feel comfortable, Duman creates thoughtful introductions to class that would be accessible to most students.  For example, a pop music music video may have a theme that relates to that day's topic.  Duman says that in providing more accessible avenues to approach an academic topic, he really tries to encourage all students to feel comfortable contributing to class discussions.

Then, Duman says that he tries to keep his PowerPoints light on text so that students must, "... fill in the blanks," and come to their own understandings.  "I want slides to be something they can engage with, and make their learning experience more engaging, and help them think about these things from a slightly different angle."

During class, Duman may challenge students to answer questions from a research study already conducted.  From their discussions, students predict what the studies found.  "I walk them through the study so that they experience what it's like to be a participant in the study," says Duman.

Later in the semester, students conduct their own research studies that use, "... tools that are available to them at CU."  Students use statistical programs that Duman teaches in class, like Qualtrics.  Qualtrics is an online survey tool that CU provides to students.  In Qualtrics, the user can generate several types of questions including multiple choice.  Duman says, "Students want to be challenged.  They want to learn new skills."

Recently, Duman was awarded a National Science Foundation Grant for a grant that he has used to perform research that has contributed to the development of the app Nano Nano.  In Nano Nano, the player follows a story arch and use gestures to learn a new language.