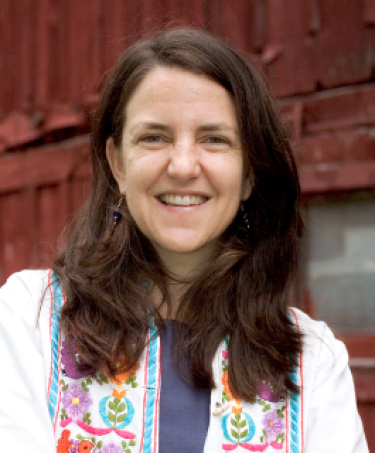 Safran's students created an online exhibit project in their Film and Climate Change class.  In the course, students are asked to present their views on climate change in several  five minute short films.  Her students learn about the science of climate change and receive an introduction to filmmaking and storyboarding editing.  Each student makes two to four short films each semester.  Safran spoke about how her students engage the challenges of communicating abstract and overwhelming science concepts:

Having to translate science into story so [that] other people can consume it and think about ... A lot of students get a lot of out of that process of writing something for a broader audience ... to get people more engaged in the issue ... I try to get the students to think about a personal story ... [or ] personal narrative, and ... give them enough science [background] to give them solid footing.

The course was created several years ago as part of the Inside the Greenhouse climate change communication program at CU.  Safran says that she first taught this course in 2009 without audio equipment.  That's when Safran applied for her first ASSETT Development Award, with which she purchased audio and video equipment for her students.  Last year, Safran received her second ASSETT Development Award.  This time, she purchased additional high to mid end audio equipment for students to use to record interviews and perform voiceovers for their films, as well as a DLSR camera, tripods, batteries, and HD cards.  Safran was also able to refurbish many pieces of equipment that she had purchased with her first ASSETT Development Award that she received a few years ago.  "We’re going into our seventh year," she said.

"Through the ASSETT grant, I’ve been able to build up stockpile of audio," says Safran.  She says that with better equipment, she has noticed improvements in terms of the students' films' production quality.

Students vote on their favorite films of the class, and those films are entered into a film festival.  Some students used stop motion animation in their films, like the most recent winner about a canary in a coal mine did.  The student who made this film did not have prior filmmaking experience.