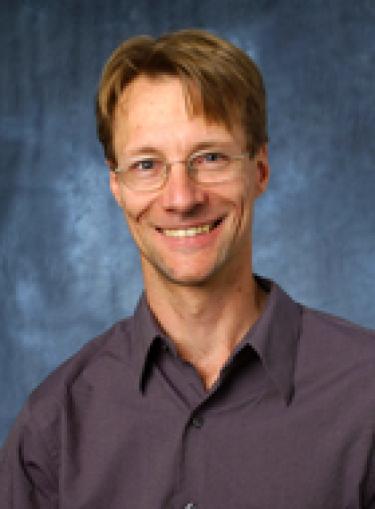 The state and national borders that had been historically dictated by a river's path may come into question when that river changes direction.  CU Boulder Geology Professor Dr. Greg Tucker understands this issue all too well.  Tucker explains that, "Rivers and streams often appear to be fixed and more or less permanent features of the natural landscape.  Yet as the recent [September 2013] flooding in Boulder illustrates, they are often quite dynamic."  Indeed, as a drive up US 36 will quickly tell you, the St. Vrain River now runs in different places than it did just a year ago before the Fall 2013 flooding, which left a lasting impact on the surrounding community.

In 2013, Tucker received an ASSETT Development Award to create an animation about a changing river system.  "I used the ... award to hire a professional scientific illustrator to work with me to create a short animated movie depicting river meandering."  The illustrator is Dr. Cheryl McCutchan of AnimatedScience.com. McCutchan made the river animation in Adobe Flash.  Watch it here:

Tucker says, "The animation illustrates the way a river can carve a floodplain by eroding and widening the valley through time."  The white along the river in the animation represents, "... Point bars ... fresh sediment ... that grow outward over time," he says.  The darker green along the river represents the older flood plain.  Tucker explains that, "The meandering process leads to fascinating patterns in river valleys, with the channel following a convoluted path that winds back and forth across its valley, and with striking features such as long, curving lakes known as oxbow lakes."  Oxbow lakes form when a river floods and changes to a straighter direction, leaving fresh new shoreline between the new straighter river and the former curve of the river, now an isolated lake in the shape of the letter U, or an oxbow.

Why Use Animation, and How?

Tucker and McCutchan explain that animation can better illustrate changes to a landscape over time than would just looking at static images in a textbook.  Tucker says, "By creating an animated movie of a hypothetical meandering stream as it evolves over time, creates channel cutoffs, and forms oxbow lakes, we provide students with a means of visualizing the dynamics at play."  McCutchan agrees:

Illustrations that show three points in the formation of a stream meander or ox bow lake don't give students a sense of how these structures form.  Our goal was to animate the evolution of a stream channel over several millennia as the channel widened ....

However, the animation was not created overnight.  Tucker says that the process took about a year to complete.  He found a computer simulation that a Post-Doctoral student had written several years prior.  Tucker shared the simulation with McCutchan to give her specific information about exactly what happens when a river changes course.  Tucker says:

Starting with these images, together with photographs, maps, and satellite images of real meandering rivers, [McCutchan] used the Adobe flash animation program to create a series of animation frames that show a river in the context of its valley and floodplain.

McCutchan explains that she chose Flash intentionally because it can create transition between a few frames to convey the illusion of continuous flow of movement: "Flash is an incredibly powerful program that allows the animator to draw only a few key frames.  Flash then interpolates how the objects change between those two scenes ..."

Tucker ultimately intended to show the animation to his Introductory Geology students because, "One of the challenges in teaching Introductory Geology is helping people appreciate that the Earth is always changing," but that changing process is often, "slow and intermittent," over hundreds or thousands of years.  He wants his students to walk away from his Introductory Geology course with some practical knowledge about changing landscapes and, "Have them leave the course appreciating that change is normal in river systems, so that when they go out and buy a house, they appreciate what it means to be on a floodplain."

Tucker plans to share this animation on the Community Surface Dynamics Modeling System, CSDMS, which is a National Science Foundation-funded site that offers share-able scientific images and animations to the public.  After all, he says, "As a scientific community, we should be sharing [information]."

Next, McCutchan and Tucker are planning to collaborate on a second animation that would use a cross sectional view to show how river sediment changes over time.