"I wake up in the morning, and I can't wait to come to work," says Dr. Stephen Mojzsis of the Geological Sciences Department at CU Boulder.  Mojzsis takes interest in his students and now even collaborates on the research level with some former students from past introductory geology courses.  Mojzsis researches the age and origin of our solar system's elements.  He takes his passion for his research with him into the classroom each day.  Mojzsis says, "My research feeds into my teaching...I think the most effective professors are those who can weave into their curricula the excitement they feel in their research endeavors." 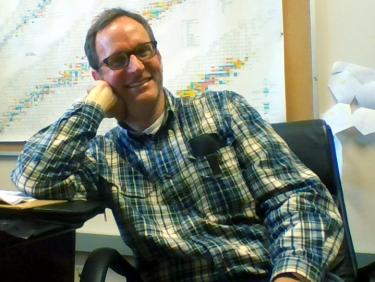 At the same time, Mojzsis strives to keep his lecture material relevant to students.  He says that he considers that in a single introductory geology course, he may be teaching freshman through seniors who may or may not be majoring in the sciences.  Regardless, Mojzsis wants to challenge students to understand why various natural phenomena occur, rather than just observing them on the news.  To do so, he may incorporate discussion of current meteorological events into lecture material.  "If I've even reached ten students, I feel like I've made a difference," he says.

Additionally, Mojzsis strives to pique students' interest every few minutes throughout a lecture to help students stay focused during mid afternoon class periods.  He incorporates demonstrations, real life accounts, and even jokes.  For example, Mojzsis may bring a geiger counter into the classroom to demonstrate the varying radioactivity occuring throughout different elements in an ordinary classroom.  Later, he may have the entire class flip coins to illustrate how scientists use powers of ten when measuring radioactive decay of isotopes to approximate ages of rocks.  Other times, Mojzsis may even just say something extra loudly or clap his hands.  Further, Mojzsis creates his own short animated GIFs to better illustrate various natural phenomena.

Students nominated Mojzsis for the Fall 2013 ASSETT Teaching with Technology Award for his efforts.  One student wrote:

Professor Mojzsis's PowerPoints were amazing.  His lectures were always perfectly in sync with them.  They were clever, thoughtfully laid out, interesting, and hilarious.  He always included great things to keep our attention, and jokes were cleverly inserted every few slides.  His PowerPoints made me go to class on the days when I didn't want to get out of bed.

The statement is particularly remarkable considering that Mojzsis doesn't mandate attendance and that he uploads his powerpoints online before classes.  In response, Mojzsis says, "I was so happy to receive this award because I love to use technology...I love being on the faculty here."