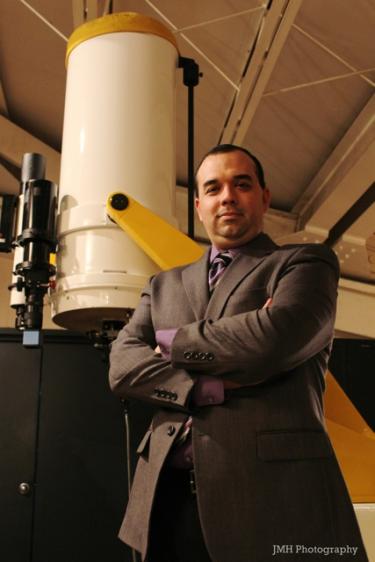 At the end of the semester, students walk into a ‘science-Oscars’ of sorts at the Fiske Planetarium at CU.  They look forward to viewing films and possibly even accepting awards for science videos that they created through Wayne Schlingman, PhD’s Astronomy 1020 Stars and Galaxies course for non-science majors.  Instead of writing traditional term papers for this class, students create 3-5 minute videos.  These videos may aim to debunk common misconceptions about basic science concepts, or inform peers about various celestial phenomena, including special relativity, black holes, and the tidal forces that affect Jupiter’s moons.  Schlingman says students tell him that they put more time and effort into these videos than they would into a term paper but have more fun.  He believes that creating these videos is important for students’ creative learning processes, especially for students who may have more strengths in arts and communications than they do in science or math.  Schlingman recognizes that such communication skills are important for any field.  He says he is happy, “Anytime I can get you to enjoy to the class more.”

Schlingman cares about what he teaches, how he teaches, and who he teaches, especially when it comes to teaching astronomy to non-science majors at CU.  Schlingman says the population he teaches is significant: 250,000 college students around the country take astronomy each year, most of them only to fulfill a core requirement before they pursue a non-science major. (Astronomical Society of the Pacific)  He says that although these students may not all be future scientists, he understands that they are future voters, politicians, teachers, and lawyers, all of whom would benefit from a solid understanding of basic science concepts.  Schlingman constantly surveys the extensive misconceptions that his students bring in at the beginning of each semester about basic science concepts so he can find out, “Where do we need to start building conceptual understanding?”

Schlingman says, “My favorite thing about teaching is the challenge of teaching…helping someone understand something and really figure it out.  You know when someone comes in [to office hours] stumped about how something works.”  To best reach students, he harps on the strong channels of thinking that non science majors already have, and he translates them into ways of thinking about science.  For example, understanding relations of size in powers of ten is vital for learning astronomy.  To help students understand, Schlingman may restate the same problem in terms of what they already understand—money, for example.  He believes in teaching students to learn to understand entire concepts, step by step, from the basics.  Schlingman thinks this part of learning is more important than memorizing facts.  Additionally, in each class, he may give students a worksheet that tries students’ broader logical problem solving process.  The problems try conceptual understanding, rather than look for a certain numerical right or wrong answer.  Students are given class time to work in groups to figure out problems.  Schlingman says, “I want to see that they can think the right way.  I want them to understand how things work.”  He isn’t just looking for a correct numerical answer; rather, Schlingman says he tries to, “Tease out memorization to understand an entire concept.”  Schlingman wants students to, “Relate knowledge back to core concepts and … weave the entire story together.  Then, find out how those characters interact with each other, like in a story.”

Schlingman is part of the CU Science Education Initiative, which believes that interactive learning is the most effective way to teach science.  He accepts this notion whole heartedly; for example, Schlingman hosts about five class sessions each semester in the Fiske Planetarium on campus. Schlingman received a Fall 2013 ASSETT Teaching with Technology Award for his efforts.  In one nomination letter for the award, a student wrote:

[Dr. Schlingman] uses massive amounts of tech to teach students how the stars work. One of the main pieces of technology he uses is the Fiske Planetarium. He demonstrates everything from how the stars move, [to] the forming of the Milky Way, to the tectonics of planets. Along with the more normal tech such as clickers and microphones, which he implements into his everyday lecture, he will also use other things such as emission tubes and prisms to show different things he teaches us can be demonstrated the real world. Finally, he encourages student to use technology outside of class with online homework, online quizzes, observation nights, and extra credit video projects in which we were encouraged to use ATLAS and video editing software. (Punctuation and capitalization added)

Schlingman says that in just one of his 75 minute lectures, he may include 20 clicker questions to keep students involved.  Ultimately, Schlingman says he wants to, “Change the appearance of what science is.  It’s not too smart--it’s for normal people.”