The Language of Physics 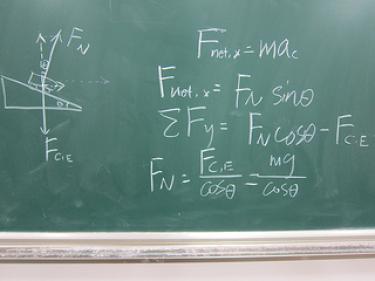 “The central finding of physics education research over the past twenty years is something that kindergarten teachers have known forever,” says Dr. Mike Dubson as rain taps against the windows of his office on the tenth floor of the Gamow Physics Tower. “It’s that students don’t learn by listening. They learn by doing.”

Dr. Dubson, a beloved senior instructor who has been teaching at CU since 1995, knows better than most that physics courses challenge students and teachers in unique ways. “In physics, memorization is not learning,” Dubson explains. “Students are pretty surprised by that. Many students come to realize that their entire learning strategy has failed.” Dubson has studied physics education for decades, conducting large, multi-year experiments on the impact of Clickers and peer discussions on learning. Most of these studies have revealed similar results: students learn best when they are interacting and talking with each other. With a dropout rate of roughly 15%, beginning physics students often struggle to make the transition from memorization to problem solving. Dubson, a Clicker pioneer who started using the technology years before any of his colleagues, believes that this tool can help facilitate discussion among students. “Every five to fifteen minutes, I ask them a question,” he says. “And the students have to talk with the other students in their Clicker group to come up with the answer.” Language, says Duncan, is understanding.  Students who can talk through a physics problem with peers (instead of passively listening to a lecture) typically learn the material much faster.

Dubson shares this strategy with his teaching assistants. To prepare teaching assistants for leading recitations, they engage in roleplay scenarios and practice responding to potential questions from students. He trains them to avoid providing direct answers. “Most of the time, a student just wants the teacher to give them an answer,” he says. But that strategy doesn’t help students learn. It just helps students complete their physics homework. With a little guidance, TAs can encourage students to come up with the answers on their own. “That way, the students have to take responsibility and ownership for the answers,” he says. “It’s much more rewarding.”

Although much of Dubson’s research has focused on the pedagogical challenges of large lecture classes, as a teacher he often interacts with individual students in the Physics Help Room. The Help Room is a place where undergraduates can go for one-on-one tutoring on challenging problems. Here too, the key to solving problems is conversation. “Its always best when the student and I aren’t in a hurry,” he says.  “We look at the problem one step at a time, until the student can explain it in words.”  Dubson provides hints (along with gentle encouragement) to let students know when they are headed in the right direction. Step by step, the student works through the problem and finds the answer on their own, surprised by their capabilies. Students often leave the sessions with new-found confidence.

Dubson’s most recent project involves comparing the functionality of online courses called MOOCS and traditional classes. But he isn’t optimistic. A strong belief in the importance of face-to-face discussion makes Dubson skeptical of online learning. “It’s almost impossible to foster moderated discussion groups for 1,000 students from all over the world,” he says. Despite his misgivings, he and other researchers are looking for ways to encourage peer conversations online.

Dr. Dubson was recently awarded an ASSETT Outstanding Teaching with Tech Award for his interactive approach in the classroom. Dubson says that students “learn by doing,” but if his studies are correct, students also “learn by talking.” Language is central to comprehension, especially in the classroom setting where physics students don’t actually have the resources to directly test the velocity of a rocket hurtling through the atmosphere. Whether through engagement in virtual chat groups or participation in traditional discussions, Dubson believes that students should work through problems verbally. It may be possible to foster these exchanges online, and it may not be. But it's clear that teachers in all disciplines need to encourage conversation.