Elspeth Dusinberre: Collaborative Technologies in Creating Narrative of Self 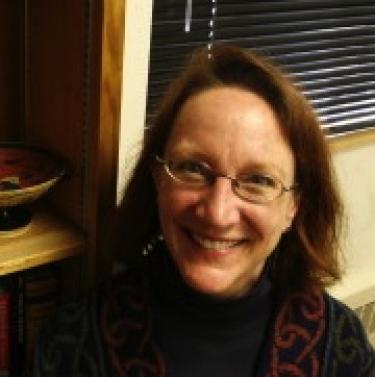 I would like to explore the use of technology, and particularly social media, in helping my students to play (in the “deep play sense”) in my class this semester.  I'm teaching an upper-division class, our senior capstone seminar, to ten undergraduates, on narrative. It seems to me that the primary way in which our students interact with narrative is online. They constantly create narratives through technology, especially in the way they post to Facebook or Instagram.

I would like to explore the use of technology, and particularly social media, in helping my students to play (in the “deep play sense”) in my class this semester.  I'm teaching an upper-division class, our senior capstone seminar, to ten undergraduates, on narrative. It seems to me that the primary way in which our students interact with narrative is online. They constantly create narratives through technology, especially in the way they post to Facebook or Instagram (or whatever). Sometimes they are characterizing themselves or creating a narrative of themselves without putting much thought into that narrative or characterization. Sometimes they are very savvy. And sometimes I think they give no thought to the ways the medium of expression influences either the narrative they are creating or how it might be received and understood. In the context of this class, we are thinking about narrative very explicitly, including a lot of narrative theory. Thus I am hoping to challenge the students to be more self-aware about their narrative choices.

Sometimes they are tremendously self-aware and creative! Thus I asked them on the first day of class to write down ten things about themselves they’d like their classmates to know -- this was a creation of narrative of self. I scanned these and put them up online, along with images of themselves to go with. I hoped thus to get them to create a verbal and a visual narrative of self before we even started problematizing the issue in class. I was astounded by the variety in response, especially in the visual images: they ranged from the unthinking to the carefully contrived, and they were astonishingly revealing about the students as individuals.

I would like to set up the class so that it integrates different kinds of technology better to help students with each other and with me, to encourage them to think more seriously about the kinds of narratives it is possible to create -- whether that be a narrative of self or a narrative about someone else, and to help them learn a little more about certain aspects of technological manipulation, so that it helps the students be more sophisticated thinkers about narrative and presenters of themselves.

I would like to get the students in this class to make verbal and visual narratives of self and other stories and put those on the course website. I would like to set up a Google Drive (or something else?) account so we can share things more readily online, and to encourage actual collaboration in class as opposed to reaction to each other’s ideas. I’d like to think about having them use technology to work collaboratively, not just reactively.

I would like to ask an expert to come work with the students to help them think about some of the principles of graphic design so they can be more effectively creative in their visuals. I’d like to help them learn the tools they will need to make and promote narratives that are verbal, visual, and multi-media.

I will ask them to create several narratives over the course of the semester, some with pen and paper and some with other media. These will include PowerPoint and will give the students the option of using Facebook, Vimeo, YouTube, websites, etc., in a final assignment to create a complex narrative (although they could also make a quilt, write a story, etc.). I will give them several choices on this final assignment: would they like to collaborate in small groups or as a class, or would they like to work alone? They need not all do the same thing. It may be easier for them to create a slightly less personal narrative; I will suggest to them that they might create a narrative of their time at CU (they’re all graduating in May). I am curious to see how this multimedia narrative will compare to that created by the Film Studies students for the graduation ceremony at Folsom!

I want to ask them to use Google Apps to do some collaborative work of different kinds -- and in different sized groups, too. Does Google Hangout help them? Do they really interact on Google Drive? What do they think of it? Is it different for them in a group of 3 as opposed to a group of 9? How might I think about this in a bigger class? What are the plusses and minuses of collaborative work as opposed ot individual work?

I will also ask them to write a series of metacognitive essays about how their sense of narrative impact is developing, how technology affects the possibilities of narrative structure etc.

My class has ten students enrolled.

My goal is to try to increase collaboration in the class; my guess is that larger group work will be more responsive, smaller group work will be more collaborative. I am curious to see the following things: is the quality of their work (amount, thought, depth, time spent, variety of sources and information incorporated) higher when they work together? Will any of them choose to work together on the final project, or will they prefer to work alone?

Here are my approaches to assessment.

What am I looking for in outcomes?

In their final narrative of self, I am seeking more evidence for listening to each other

I can also talk to students in class about their experiences

This experiment in using Google Drive to increase collaborative learning in a small class was a resounding success -- I couldn’t be more pleased. I used Google Apps in several different contexts in this class of ten students:

I hoped thereby to increase the collaborative possibilities outside class that we were exploring in class via small group projects, discussions, etc.

I noticed a very marked improvement in quality in the papers the students wrote together as collaborative assignments.

The first one, with all the students working on a single paper, was too big a group to function well as truly collaborative learning; what happened instead was that they responded to each other (both in the text of the paper and via comments). It was a terrific final result, but not real collaboration. This is why I split them into small groups the second and third times.

Those second and third sets of papers were truly outstanding, some of the best student work I have seen -- thoughtful, insightful, articulate, polished, and really excellent overall. It was clear that they had invested serious time and work into their collaborative papers, that they were striving to impress each other, that they benefited greatly from each other’s insights and contributions and ideas. I was snowed! They united ancient and modern examples in their discussions, thought deeply about the applicability of the concepts we were studying to their lives now. The papers were at least twice as long as their usual mono-authored weekly papers. They referred to discussions in class with other students as well as delving deeply into the discussion with each other in this written context. They managed to agree AND to disagree in polite and very productive ways in their papers -- the increased sophistication of their analysis and interpretation was very marked.

I also noticed an increase in collaborative friendship on the part of the students in class. I am not sure how much of this is due to using Google Drive, as it was a highly interactive class overall anyway and we did several things outside class together as well, but I am certain that Google Drive allowed the students to take that collaborative sense of enjoying each other into their work together outside the classroom as well as what we did in class itself.

The students’ final presentations in class, a narrative of self, demonstrated this collaboration most fully. They drew on each other’s ideas and likes in ways that were lovely to see. The projects were -- again -- the best I’ve ever seen in a class (graduate or undergraduate). And the thing that was most striking was the degree of open honesty, of brave sharing, that characterized them. The students were willing to talk about terrible things that had happened to them or aching vulnerabilities that dominated them. One of them (a young man) did an interpretive dance for his classmates. Their sense of intimate friendship was really exceptional. I was moved to tears several times in the course of the class period. I am sure that the increased collaboration allowed by Google Drive contributed to this sense of safety and friendship, and also to the desire to excel, that underlay every presentation that day.

I got mixed feedback from the students themselves on the use of Google Drive. The first set of feedback came in the form of a class interview conducted by a colleague as part of my normal in-class review for Multiple Measures of Teaching. This was carried out shortly before the last collaborative paper was due, and it appears to me the students were worried about the demands of drawing architectural plans and discussing architecture as narrative in that collaborative online context. Here is what they said (in response to a question asking them if there were things I could do differently to improve the class):

Overall I view this as a plus, since it shows they too recognize they were investing more work into the collaborative assignments. I am taking very seriously their comments, however, about not feeling sufficiently tech-savvy. This is something I will hope to remedy next time I try this kind of project.

Once they were done with all of their Google Drive assignments, I had them fill out responses to a series of questions about their work, as outlined in Post Three of this project. Only eight of them were in class, but their responses were overwhelmingly positive. Nobody even breathed a hint of anguish! To a person, they claimed to love all of the collaborative work both inside class and via Google Drive (although several of them repeated the inconvenience of working on someone else’s time). Most interesting to me was their passion about each other -- I asked them “how do you feel about your classmates?” as one of their questions. This is what they said:

As for Google Apps, this is what they say (the question was “what was the role, if any, of Google Apps in your learning these things in class?”)

A resounding success. I am going to use Google Apps again to assist collaborative work in the future!