Mystery and Intrigue at the CU Digital Library 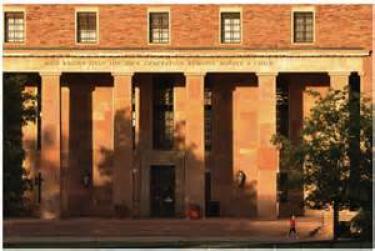 "It was tucked into the last page of the second to the last diary," says Patrick Mulcrone, CU's newly hired Digital Imaging Technologist. For weeks, he and his student employees had been painstakingly scanning and digitizing hundreds of diary entries written by the American general William Carey Brown, dating back to the late 19th century. Brown commanded troops during the Spanish American War, fought as a Rough Rider during the battle of San Juan Hill and served in the Rainbow Division with Douglas MacArthur during the first World War.[1] Although the papers are highly valued by war historians, by the time Mulcrone had scanned his hundredth page, he had grown weary of war strategy. That was when he noticed the valentine.

"I go through pages and pages," says Mulcrone, smiling as he shows me a PDF image of a raggedly cut paper heart on a computer screen. "Something like this is a little gift."

The valentine is pierced with a blue paper arrow and tied with a faded green ribbon. There is a hand-written poem inside:

"There is a lass named Brown

Who longs for her own State and Town

So I sent her a book

In which she can sail

On the sea in a calm

On the worst stormy gale

Without ever a sigh or a frown"

It is a sweet, unaffected poem. One wonders who Miss Brown was and why the general kept the valentine tucked away in his diary. Was the heroic general too shy to send it to the lady in question, or was it rejected and sent back to him? And then there is the question of the shared last name. Was Miss Brown his little known wife? Why would he address her as "miss"? Was the poem written by an anonymous person to one of the general's relatives? If so, why would the General have kept it in his diary? Does the letter even date back to the era of William Carey Brown? Perhaps it was forgotten there by a young historian in the 1940s or 1950s?

The general's diaries are part of an extensive archive at CU called The William Carey Brown Papers. The collection includes a litany of war statistics, lists of provisions and casualties, and detailed descriptions of battle sites, all written by Brown. Amidst the statistics, there is very little personal information. "You would imagine that we might lose sight of the fact that these were real people," says Holley Long, the Digital Initiatives Librarian at CU Boulder. "Finding things like [the valentine] is really humanizing."

Long inhabits a small office on floor four and a half at Norlin Library. She opens the CU Digital Library webpage on her computer and shows me the archive. The first collection listed is a series of aerial photographs of Colorado taken by the U.S. Forestry service. Long points to a selection of folk music scores and then to an index of watercolor plates of historical hats and headdresses.

"When people think of a library collection, they don't usually think about some of the things we have," says Long, her finger scanning the page. "We've scanned medieval manuscript leaves. We've scanned film and audio. We've digitized folk music recordings from the 40s and 50s. We've digitized maps..."

The collection consists primarily of rare documents unique to CU, but patrons of the Digital Library hail from around the world. "Our emphasis is to make primary sources available for study and research," says Long. "A lot of city planners in Colorado use the Sandborn Map Collection. We have several classes using the medieval manuscript collection, and there is a scholar in England currently using our McLaren collection for his research on Thomas MacLaren." (MacLaren was a Scottish architect who emigrated to Colorado and designed notable buildings in Colorado Springs.)

When asked what the future holds, Long says, "We would like to ramp up production. We're looking to expand equipment options."

Back in the Digitization Lab, Patrick Mulcrone helps Amanda Brown from Special Collections scan an image from a rare book of the work of British photographer Samuel Bourne. Brown (who, strangely, also shares a last name with the General and his valentine) slips on crisp, white gloves to carefully turn the yellowed pages. Both of them struggle to lift the book onto the flatbed scanner.

"Is the text important?" asks Mulcrone. Brown nods as they crop the image down to size. Later, Mulcrone shows me a scanned description of "The Mechanical Bakery," a U.S. Amy project from the first World War designed to output 800,000 lbs of bread per day. Clearly excited, Mulcrone points to the daily ingredient list which included 65,000 lbs of flour.

Although I'm intrigued by the Mechanical Bakery, I tell Mulcrone, I still can't stop thinking about the Valentine. Did William Carey Brown ever marry, I wonder. Was the Valentine an artifact from a secret relationship?

After the holiday break, I may do some investigative journalism at the CU Digital Library in attempt to solve this romantic mystery. In the meantime, Holley Long, Patrick Mulcrone, and the students who work at the CU Digital Library will continue expanding their impressive archive, all the while keeping their eyes open for letters tucked in the bindings and mysterious notes in the margins.