A Sun the Size of a Teacup 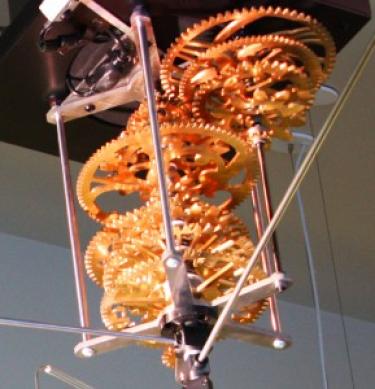 A college dormitory might not be the first place you would expect to find a large-scale model of the solar system, but inside CU's Andrews Residential Hall, planets orbit slowly around a bright orange sun.

Built by Engineering Honors students during the 2011 – 2012 academic year, "The Grand Orrery" was unveiled to the public in February 2013. It is now suspended from the ceiling of Andrews dormitory, where unfazed undergraduates play ping-pong, watch movies, and eat Twizzlers as the planets cast shadows over them.

"This project was very ambitious, both mechanically and mathematically, but the multidisciplinary nature of the team helped us spread the workload," says Eiten Cher, who directed the project. Cher, who is an alumnus of the engineering program and now a Master's student at Northwestern University's Engineering and Design Program, worked with a small group of dedicated undergraduates living at Andrews to design and build the orrery.

The project was part of an interdisciplinary design team organized by Dr. Scot Douglass, head of the Engineering Honors Program. Dr. Douglass initiated the group in an attempt to foster collaboration between engineering and the arts outside of regular class. In his vision, the undergraduate design team would tackle a series of projects commissioned by him, during their own free time, the first of which was to "to design and build a working scale model of the solar system with scaled distances and scaled orbit times."

Students were excited about the orrery from the start. Douglass asked Cher to take charge of the project and he quickly assembled a small team of mechanical engineering, architectural engineering, and computer science students, many of whom also had artistic interests. Often working late into the night, the team collaborated on the project for almost a year. "Our goal was to produce a working system that was also a work of art," says Cher.

Part of Douglass' plan was to encourage the students to become familiar with both cutting-edge and ancient technology. The concept of an "orrery" has a long history, and ancient planetary models were typically driven by clockwork. A famous painting by Joseph Wright of Derby depicts a philosopher using a clockwork orrery to teach a group of onlookers about the workings of the solar system in 1766. Cher and his team learned to design and manufacture clockwork gears. However, they used a CNC machine to cut the gears, made sophisticated calculations with the aid of computer software, and powered the mechanism with an electric motor.

"I am immensely proud of our custom-made gear system," says Cher. "Each planet has an associated pair of gears, and each pair had a unique design cut into it," he explained. "Some designs were particular to the planet that the gears drove, like Uranus, whose ancient symbol was carved into its gears. Other designs stemmed from engineering inside jokes, like the logos of Aperture Science and Black Mesa (fictitious companies from Valve Software’s beloved video game franchises) that adorn the gears of Neptune." Part science project and part art installation, the orrery has captured the imagination of students and faculty across campus. For the student team who created the model, the installation represents a year of hard work and also lots of fun. "When I look up at the gears, I am reminded of all the great times I had in Andrews Hall," says Cher. In the end, this complex and playful project is a testament to the imagination and dedication of CU's engineering students, and will likely inspire the residents of Andrew's Hall for many years to come.