For every dollar the government spends to make existing buildings more resistant to wildfires, earthquakes, floods and hurricanes, $6 is saved in property losses, business interruption and health problems, according to a new study led by CU Boulder Professor Keith Porter.

The study also found that for every $1 spent to exceed building codes and make structures more hazard-resistant in the future, $4 would be saved. In all, over the next 75 years, these measures could prevent 600 deaths, 1 million injuries and 4,000 cases of post-traumatic stress disorder, the report concludes.

“Considering that natural-hazard losses continue to climb, exceeding $300 billion in 2017 alone, mitigation decisions are more pressing now than ever,” said principal investigator Porter, a research professor in the department of civil, environmental and architectural engineering. “This study shows it pays to build new buildings better and to fix existing ones, and everybody wins when we do so.”

A 2005 version of the study found that for every $1 the Federal Emergency Management Agency spent to fortify existing buildings, taxpayers saved $4. That study has been instrumental in convincing governments around the world to invest in natural hazards mitigation. But the new expanded study suggests it underestimated how cost effective it can be.

For the revision, Porter and a national team of scientists calculated how much the federal government spent on mitigation over the past 23 years.

Then they used probabilistic risk assessment to calculate how much expense that mitigation avoided or will avoid. In addition to looking at earthquakes, hurricane winds, and river flooding–as the 2005 study did–they looked at fire at the wildland-urban interface (a growing problem in Colorado and California) and hurricane storm surge, which caused the bulk of damage from Hurricane Harvey in Texas.

And researchers asked a new question: What would the cost-benefit ratio be if, for one year, all new private sector buildings in high-risk areas were constructed to exceed existing codes?

“There is nothing wrong with existing codes. Their purpose is to protect human life and they do that very well,” said Porter.

But when it comes to preventing buildings from becoming unusable, they can fall short, his research shows. (One CU Boulder study led by Porter found that should a 7.0 earthquake hit a metropolitan area in California, 25 percent of the buildings up to code would be collapsed, unsafe or damaged enough that use is restricted).

“We wanted to find out what would happen if the goal of codes were to protect human life and to have the most resilient building stock possible that still makes economic sense.” 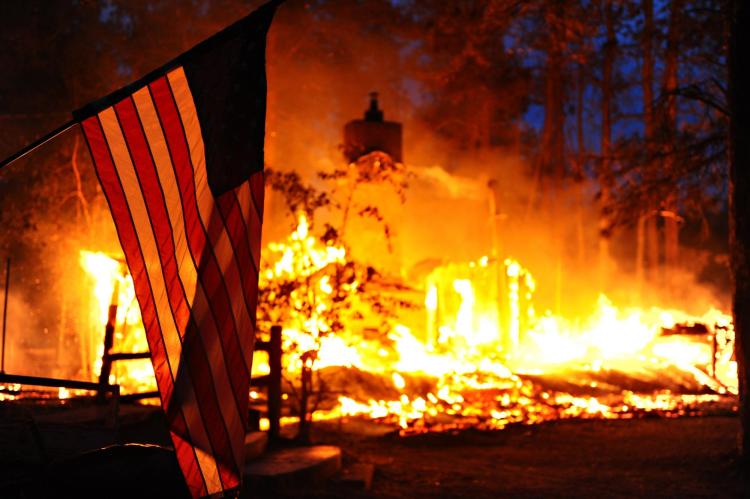 A U.S. flag hangs in front of a burning structure in Black Forest, Colorado. Credit/NASA

With the $27.4 billion the government invested in the past quarter-century, it will save $157.9 billion, the study found. Going forward, if private builders invested an additional $3.6 billion for just one year to exceed code, society would save $15.5 billion.

In some areas of the country, the return would be even greater.

“There are counties in California where it makes economic sense to make buildings three times as strong and stiff as code requires and the benefit cost ratio could reach 8-to-1,” said Porter.

In several Colorado counties in the wildland-urban interface, requiring builders to adopt the International Wildland-Urban Interface Code, which requires things like fire-proof roofing materials, could save $3 for every $1 spent.

Porter hopes the study will encourage lawmakers to invest more in hazard mitigation. Future studies will explore what society can do to incentivize builders to do the same.

“This past year was the costliest ever in the United States in terms of recorded disaster losses,” said Peek. “This report charts a clear path forward, illustrating that investments that we make before disaster strikes can help reduce the harm and suffering caused by these events.”

New research shows that dietary compounds called prebiotics, which serve as food for good bacteria in the gut, make the body more resilient to circadian rhythm disruptions from things like jet lag or shift work. END_OF_DOCUMENT_TOKEN_TO_BE_REPLACED

Screen time may not be as harmful as previously suspected for school-aged children and may have some important benefits, according to one of the largest studies to date exlporing how screens impact youth. END_OF_DOCUMENT_TOKEN_TO_BE_REPLACED

New research finds that washing and drying cotton cloth masks doesn’t reduce their ability to filter out viral particles. END_OF_DOCUMENT_TOKEN_TO_BE_REPLACED
Return to the top of the page