Book Review: How to Carry Scars by Dana Green

For those familiar with Dana Green’s collection of hybrid fictions Sometimes the Air in the Room Goes Missing (Tarpaulin Sky Press, 2016), the first line of her debut novel, How to Carry Scars (Kernpunkt Press, 2018), might be surprising: “Olivia’s mother documented the world.” Green’s narrator writes, “She recorded every untied shoelace, failed parking attempt, stubbed cigarette, and grocery store purchase.”

It’s a far cry from the first line of Sometimes the Air Goes Missing, which opens with one of several unnamed first-person narrators writing: “I learned how to smoke herrings, hung limp in the shed. Hitched my ankles in the rafters, swayed.”

While on its surface, Green’s How to Carry Scars might sound like a more traditional, realist effort, a reader returning to Green’s work knows in actuality they should expect no such thing. This second piece is titled “Smoked,” and like every story in Green’s first book, it is told three times throughout the course of the collection. It is linguistically inventive, and although it may take on a more bizarre flavor than the first line of How to Carry Scars, the first line of “Smoked” is perhaps more representative of Green’s writing as a whole: her clauses link to clauses through surprising instances of parataxis, each sentence sewn together like a little Frankenstein’s Monster or a mess of illogically tangled limbs.

This resistance to logic is a good thing. Green is a writer for readers who find themselves tired with fiction that functions in a set way. So while How to Carry Scars, at its most fundamental level, may present itself as a bildungsroman, one can be certain it will be a twisted take on the genre, to say the very least.

Part One of How to Carry Scars contains the story of its protagonist Olivia’s childhood, growing up with an abusive mother who compulsively collects photographs, and an absent father who exists only in her mother’s stories. Part Two unravels the impressions that said childhood has left years later. The two sections are each told in a different point of view: the first half through third-person, past tense narration, and the second half narrated by Olivia in the present tense. This bifurcation in the point of view allows the reader to read Part One as a memorial, whereas the second is situated in the current moment, if not an aftermath. Scattered throughout both is a series of dialogue-heavy fragments all titled “Your Father,” wherein the mother tells unreliable stories about Olivia’s father in heightened language, thereby catapulting his story to mythic proportions.

In one fragment, Olivia’s mother says, “This is what you liked the most, I think. Bulging crystal centers like plump nipples ready to feed you. Saw, through my eyes, the easy curve of the ceiling, high above us, like the pale skin of a building keeping us safe from the rest of the world.” Green walks a tightrope here, balancing unexpected language, while presenting it as the mother’s dialogue. And while some readers may bristle at this lyricism being attributed as being spoken, it seems part of a deliberate effort by Green to reject any realist leanings commonly associated with the coming-of-age story.

Instead, this novel is propelled forward by an intense, emotional thrust, the likes of which is rarely seen in contemporary literature. She foregoes cool prose, instead choosing to write of sharpness in oceans, fire beneath scars, houses ready to ignite, and kisses that land like earthquakes. It reads almost like a direct challenge to the all-too-cool, ironic literary ethos of the late 20th century, and instead, with its piercing sincerity, evokes comparisons to writing by post-ironic literary figures such as Stephen Graham Jones and Michael Chabon.

Though like Green’s previous work, How to Carry Scars does not shy away from inventive formal approaches. Both parts of the book are built from smaller micro-fictions with large gaps of time spaced between each section. Before long, the whole begins to resemble a scrapbook, not unlike one Olivia’s mother might compulsively build. It’s a sensible formal move, as memorialization is key to the novel’s thematic logic. After one of the novel’s central characters passes away, the narrator reflects on the location where the accident took place: 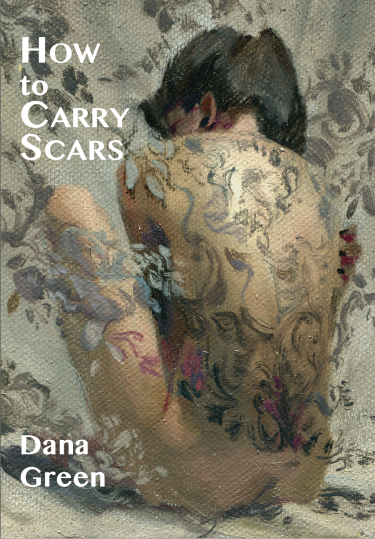 “At first, a memorial will be thrown together by the family and friends of the futures that ended. The way people build memories on the side of roads, the flowers that refuse to die, and messages that fade with rain. Later, this will become a place where love-struck teens leave their initials. Disappearing but reminding the cars that drive by that ‘I was here.’ … Eventually there will be a plaque and bronze lettering and official site built from fundraising. By the time it is revealed, the accident will be left behind.”

Green warps time in this excerpt, allowing the reader to see in absolute clarity the impermanence of memorials. Not only do her character’s messages fade, but further, the supposedly permanent causes of the memorial are quickly forgotten. In the case of Olivia, she seems to ignore them completely: “Olivia will never leave a message-photo-flower-candle,” the chapter ends.

Just like Olivia’s mother with her photographs, this whole book is obsessed with the attempt to capture brief moments of time. By the end, what strikes the reader is that while memorials may be obsolete, the pain they represent will persist beyond. Green continues to draw parallels between the memorials we build on the page and on land with the memorials we build on the body: the titular scars, being Olivia’s in particular. They form lasting sites of discomfort etched onto the body, Olivia’s voice remarking at one point, “my scars do not scream or tingle, but feel almost like the scratch of a cough.”

While the origins of our character’s pain may have been left behind in Part One of the book, we see that it is never completely forgotten physically or otherwise. Olivia outright contradicts her previous assertion that her scars do not “scream” later when she reflects: “My scars scream with a rage of betrayal. At never forgetting.” Here, Green invites us to believe that the remembrance of trauma can be as actively painful as the trauma itself (an invitation, it is worth noting, that is further supported by contemporary science and trauma theory).  Although Olivia was under the previous assumption that her scars can no longer scream, her memories reactivate the screams that are alluded to as being present in Part One. Part Two, as a result becomes more than simply an echo of the former. It is a fading scrapbook that manifests into something as vivid as what the scrapbook attempts to represent.

With all this said, it wouldn’t be right to say Green is using her characters solely to make thematic gestures. If anything, it feels like she is doing quite the opposite. The larger concerns of this novel—trauma, memorialization, childhood, etc.—seem to be naturally produced from these character’s histories, and Green’s sincere, sensitive portrayal of them. While there was no doubt before that Dana Green is one of our most bold contemporary prose stylists, this heightened story of loss and family proves she is also one of our most devastatingly earnest.

Dana Green is the author of the novel How to Carry Scars (2018) and the fiction collection Sometimes the Air in the Room Goes Missing, co-winner of the Tarpaulin Sky Book Prize (2016). She received her MFA from the University of Massachusetts in Amherst and PhD from the University of Denver.  How to Carry Scars is available for purchase here and most anywhere books are sold.

Garrett Biggs’s fiction appears in CutBank, Nashville Review, The Offing, and others. He is managing editor of The Adroit Journal and a MFA candidate at the University of Colorado Boulder.