Book Review: Visuals and Loss in "Ghost Of"

Diana Khoi Nguyen’s poetry collection Ghost Of is a haunting exploration of grief’s aftermath, for a sister and for a family. Musical, visual, personal, and cultural, Ghost Of interrogates loss through a symbiotic relationship between verse, poetic form, and the materiality of the book.

Readers must face their own sense of loss in Nguyen’s poetry. Ghost Of begins with this declarative statement: “There is no ecologically safe way to mourn,” in the poem “A Bird in Chile, and Elsewhere” (13). Nguyen requires readers to pause at this general statement about the dangers of grief before launching us deeper into poems sharply painting the picture of a refugee Vietnamese family, a sister, and her brother lost to suicide. In this first poem, the poet writes about plants that continue producing pollen after losing their petals, a flower that “grows only in the invisible” (13). Her lyric and ecological metaphors begin us on a haunting, visual journey through loss, the seen, and the unseen. 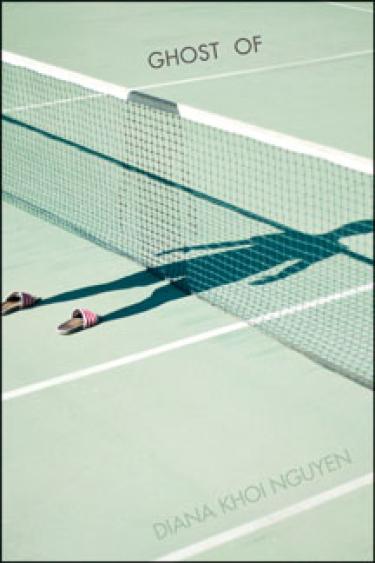 With the risks involved in mourning, we must carve a space to grieve, and Nguyen does so pointedly, with the poems’ speaker going where loved ones traditionally refuse. While survivors might hesitate to utter a difficult sentiment like, “I am glad that you are dead” (51), Nguyen’s speaker divulges it as confession in one of the poems entitled “Triptych.” In “Reprise,” the speaker demands to hear “that what we lost as collateral is also a gift” (73), revealing the heartbreaking tension between loss and hope and the attempt to make meaning. Could our lost ones offer us something beyond grief? Nguyen uses the collection to begin to answer this question. She juxtaposes unsettling, honest statements with a sense of guilt and failure. If there was a safe place to mourn, it would allow us to walk through grief both hurting and empowered to explore all its soft and acute angles.

This movement in language is paired with movement across the page in the form of text, shapes, and photos. Nguyen’s Ghost Of pushes what is visually possible in a poetry collection. The poet even manipulates the darkness and lightness of the book’s print. The visual art—along with the historical and political commentary—helped Nguyen earn Terrance Hayes’s comparison of her work to that of Douglas Kearney and Tyehimba Jess.

In various poems all entitled “Triptychs,” family photos feature negative space where Nguyen’s brother has been cut out. The second page in each triptych shows the shape of her brother filled with a poem, and the third page holds the shape of the photo filled with a poem that moves around the space left behind by her brother. Nguyen asks readers to confront negative space in these poems. What happens when someone is removed from the picture? When the body is cut out (of pictures and otherwise), its meaning is removed from context. This cut-out body—set on its own as Nguyen does on the second page of the triptychs—more easily carries its own story, its own language, that we cannot jam back into its former home. Yet the negative space remains in the photo, teaching us how our dead shape our language, how we jump within and across words to understand each other between the space left by loss.

The triptychs demonstrate deft awareness of the materiality of the book itself and what happens between pages. As readers turn a page, the cut image of the brother presents itself on both sides. He lives as shadow on one page and ink on the other. Seeing negative space as well as his cut-out shape on the reverse page haunts us. We are made aware of an in-between space, of simultaneous absence and presence.

The shape of Nguyen’s cut-out brother moves and mutates, just as the dead and our understanding of them do in the afterlife. In multiple poems entitled “Gyotaku,” Nguyen manipulates photo cut-outs by shaping them into eels, a mass of triangular daggers, and an uncontrollable cluster of coffins. The name Gyotaku refers to a Japanese traditional method of printing fish to record a catch. Generally, the fish is inked, and paper is pressed on it to create an image. In that vein, Nguyen creates relief images of texts shaped like her brother, though—unlike the Gyotaku prints—her visual work questions our ability to hold onto history objectively. The shapes change and the artist’s hand is no longer documentarian but rather wildly subjective and imaginative. In one of the poems, text and photos appear in circles, while the reverse side of the page contains a blurred out, “glitchy” version of the text in a circle. Nguyen denies our expectation to see and understand this pain or her brother. Thus, inaccessibility and forgetting, as much as accessibility, memory, and imagination, offer insight in the “Gyotaku” poems.

Ghost Of’s lyrical, at times lush, at times sharp and haunting writing shows us grief from different perspectives. In addition to the visual guide to mourning, Nguyen ties personal loss to the backdrop of cultural loss and trauma. Though not as prominent as the loss of her brother in this collection, the U.S. War in Viet Nam, the loss of homeland, and the impact of migration intensify the family’s struggle through this heavy sorrow. The speaker confronts readers with no mercy, stating--almost taunting-- that “if you bypassed a war, a war/ wouldn’t bypass you” in “The Exodus” (34), and the god that made you suffer then will make you suffer now in “A Woman May Not Be a Safe Place” (48). Returning to the book’s first line, “There is no ecologically safe way to mourn” (13), reveals the message of inescapable pain and disorientation of grief.

In Ghost Of, Nguyen shows readers how to shape mourning and how mourning shapes us. Haunting language, painful ideas, and visual representations of loss come at us again and again like waves of grief. One finishes the book seeing empty spaces—a family’s loss imprinted—and hopelessly grasping at the words for it all.

Born and raised in Los Angeles, Diana Khoi Nguyen is a multimedia artist and award-winning poet whose work has appeared widely in literary journals such as Poetry, American Poetry Review, Boston Review, PEN America, and The Iowa Review, among others. She recently won the 92Y's Discovery / Boston Review 2017 Poetry Contest and the Omnidawn Open Book Contest. She has also received awards, scholarships, and fellowships from the Academy of American Poets, Key West Literary Seminars, Bread Loaf Writers Conference, Provincetown Fine Arts Work Center, Community of Writers at Squaw Valley, and Bucknell University. Currently, she lives in Denver where she is a doctoral candidate in Creative Writing at the University of Denver. She teaches at the Lighthouse Writers Workshop and in the Daniels College of Business at the University of Denver. Ghost Of is availiable for purchase here.

Phuong Thao Vuong has been awarded fellowships from Tin House, VONA/Voices, and Kearny Street Workshop’s Interdisciplinary Writers Lab. A 2017 Joy Harjo Poetry Prize finalist, she has publications in or forthcoming in Duende, Cutthroat, Apogee, and elsewhere. Her debut poetry collection is forthcoming from Finishing Line Press in 2019. She is currently an MFA student at the University of Colorado Boulder.