REVIEW // "A Fugue for Displacement and Grief": Night Sky With Exit Wounds by Ocean Vuong 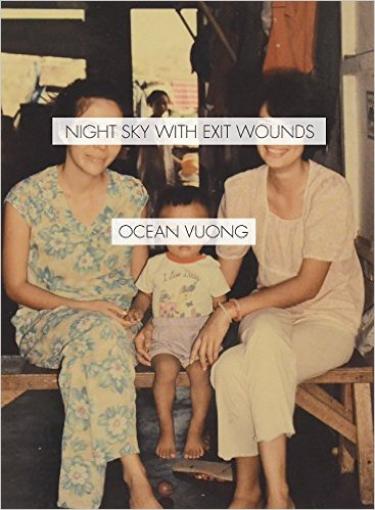 Night Sky With Exit Wounds, Ocean Vuong’s first full-length book of poems from Copper Canyon Press, does not hide much of anything as Vuong reveals and confronts trauma, depression, loss, and displacement in this fiercely brave collection. Vuong’s poems work to locate the “here” across two continents and myriad emotional landscapes as their speaker struggles with death and diaspora as a 1.5 generation Vietnamese-American immigrant. The reader is witness to their meditations on scenes from a traumatic past and subsequent fleeting present, grasping for comprehension in order to project a future of stability. The heaviness of these scenes demands attention, repetition, and incantation. Only towards the end of the book, after much excavation of the past, do the poems attempt to imagine a future of belonging.

These sonic meditations on grief, diaspora and queerness are set to the poems’ musical and psychiatric fugue states, instantiated through a set of images that incessantly loop as they do in Vuong’s mind. The poems set the temporary loss of identity characteristic of psychiatric fugues to phrasal and motivic variation that search for “here-ness” in explorations of sexuality and the body, while responding to the traumas of displacement, family deaths, and anti-queer discrimination. Throughout these harrowing scenes, Vuong’s bravery is bare on the page as we track his speaker’s personal revelations.

The book’s first poem, “Threshold,” introduces us to the first motif that generates the central concerns in the book.

In the body, where everything has a price,

I was a beggar. On my knees,

I watched, through the keyhole, not

the man showering, but the rain

falling through him: guitar strings snapping

The kneeling speaker is a child peering through the bathroom keyhole at his father in the shower. Kneeling is one of several images that become more complex throughout the collection’s fugal modes, conjuring images of prayer and desperation in the face of trauma. Even as a child, he anticipates the feeling of being lost, embodying the emotional texture of his father’s song. Fixated on the father’s voice, the end of the poem emphasizes the value of the sonic. “I didn’t know the cost // of entering a song—was to lose / your way back.” Form accentuates song here: “Threshold” exemplifies the volume’s material techniques, a kind of prologue for the book’s progressive transformation of trauma into music built through form, assonance, and internal rhyme. The staggered couplets serve to tilt us slightly off-kilter from the traditional couplet form. The instability of the form echoes that something in the scene isn’t quite steady. The indented second line in each couplet subtly creates extra room for the sound to breathe. Introduced as the voice of song, the figure of the father morphs in subsequent poems into a more complex figure—a man who symbolizes violence, insensitivity, and abuse. This complexity haunts more than hovers over the book like dark clouds over the ocean.

The ocean, Vuong’s first name, serves as a conceit of sorts for this self-reflexive collection. The Pacific separates familial homeland from the Vuong’s present home. Waves represent the instability of identity Vuong struggles with. The book itself can be seen as Vuong performing the “faithful work of drowning” in familial history and trauma in hopes to emerge with a stabilized sense of identity recovered from fragments. The rest of Part One performs the “work of drowning” by retracing Vuong’s parents’ journey across the Pacific from Vietnam to America. Poems like “Immigrant Haibun” further develop Vuong’s connection to his parents, while highlighting the family’s fraught relationship to Vietnam as home. The mother figure comes to represent the motif of teeth in this poem composed of several prose blocks.

If you must know, the best way to understand a man is with your teeth.

Teeth as a motif embody the need to understand and be understood. Like the image of the father, a history of violence, abuse, and diaspora looms behind the mother, which complicates the speaker’s understanding of “here.” This is further reinforced with the poem “Self Portrait as Exit Wounds,” where we find the speaker in war-time Vietnam. He embodies both an American “John Wayne” persona and the bodies of his displaced ancestors.

…her husband sits staring at the moon

god refused him, let it hit his jaw like a kiss

we’ve forgotten how to give one another, hissing

with fire, the sky only the dead

look up to, may it reach the grandfather fucking

the pregnant farmgirl in the back of his army jeep,

his blond hair flickering in napalm-blasted wind, let it pin

him down to dust where his future daughters rise…

The music in this violent poem arises from assonance and internal rhyme particularly with the sharp, short “i” sound. “Hit,” “kiss,” “hissing,” “flickering,” “pin,” with the many instances of the violent masculine “his” and “him,” build the fugue of pathos that carries us into the second part of the collection. Though Vuong may be criticized for heavy reliance on assonance and internal rhyme, none of it feels forced. This poem, which juxtaposes the above lines with mentions of “Michael Jackson,” “blue boxes of pasta,” and “Agent Orange” covers so much imagistic breadth that the musicality sneaks up on the reader.

The haunting music carries the reader to Part Two where the speaker continues to struggle with the influence of American culture and identity, often seeking escape through sexuality. Poems such as “Because It’s Summer” and “Into the Breach” metaphorize sexuality as the speaker’s flight out of trauma through a poeisis of the body into a sonic entity. The kneeling speaker from Part One now kneels not because of trauma and violence, but from a lover's affection. The understanding sought in sexual intimacy is again brought forward through the speaker’s teeth, an image of unmediated desire.

But moments of intimacy with a lover are haunted by the mother and father; the past follows and obfuscates his individuality as it does in “Because It’s Summer.” In this poem, the speaker approaches a lover in a field. He narrates the scene but cannot do so without invoking the mother through memory. “[H]e looks different / from his picture but it doesn’t matter / because you kissed your mother / on the cheek before coming.” The mother and her previous advice to “understand a man with your teeth” travel with the speaker as he approaches a new lover. Later in the poem, the speaker invokes the father through recalling the shower scene in “Threshold,” “to speak through the zipper a thin scream / where you plant your mouth to hear the sound of birds / hitting water snap of elastic.” Queer sexuality becomes a new form of prayer for the speaker seeking refuge from trauma and oppression. Vuong shows the range of his skills here, allowing this loose form to create a quick rhythm to the language spilling over with the emotion of the speaker’s escape, the speaker who needs to find a release for so much history and isolation. The speaker recognizes a similar isolation in the lover, “the boy & / his loneliness the boy who finds you / beautiful only because you’re not / a mirror,” but even in this recognition the speaker feels his otherness as not a mirror. Even in his escape, the speaker feels fetishized. The friction of being a queer immigrant in America is inescapable.

In the third and final part of the book, the speaker, finally, leaves the past and tenuous present and we meet a speaker projecting a future from the past. While Vuong never motions toward any naïve resolution, a few poems toward the end allow the speaker some room to imagine, even if the future remains embroiled with the past. One of these poems, “To My Father/ To My Future Son,” begins with an Emily Dickinson epigraph, (“The stars are not hereditary”), highlighting the speaker’s need to escape familial shadow, to forgive and be forgiven.

Once, I fell in love

during a slow-motion car crash.

We looked so peaceful, the cigarette floating from his lips

as our heads whiplashed back

into the dream & all

This moment of tender sentimentality could not stand on its own without the tension created in the fugal motifs throughout the book. Earlier in the book, the reader encounters the speaker kneeling with many lovers, but not speaking of falling in love. We see the speaker wanting to be known by someone’s teeth. We feel the urgency of needing to escape the family shadow to feel “here.” The tender remembrance of feeling forgiven, juxtaposed with the car crash, is a rare moment of respite from trauma. But respite is fleeting. The poem ends with the speaker addressing his father/future son about “the book I left for us” directing the ambiguous him to “Use it to prove how the stars / were always what we knew / they were: the exit wounds / of every / misfired word.” The title emerges from this poem and we see the importance of language for Vuong. The misfired words wound, and the poet continues his search for “here” by facing trauma rather than fleeing. In this poem, the lines stretch across the page like “sharpening blades,” each one an attempt to carve a sonic “here” for the speaker. These attempts do not succeed. The shadows remain. But the music that emerges from Vuong’s language allows pain to rise to the surface in a form that does not make us run; the fugue creates a book for us to continue to “turn back & find.”

Here, I realized Vuong’s mastery. The book seamlessly shifts in and out of traditional couplets, quintets, sextets, lines floating across the page, blocks of text, and staggered stanzas without dislocating the reader. The recurring images of teeth and kneeling kept me near the speaker. The rhythm, impeccably controlled through punctuation and enjambment, carried me through painful scenes. I immediately trusted the work, felt grounded in the poems enough to begin to feel the unsteadiness of the very ground the speaker knelt on. Every movement of Ocean Vuong’s is subtle, restrained, and trusted, enabling moments of emotional tenderness and candor that otherwise may feel overly sentimental. Vuong’s debut reminds me how important the “faithful work of drowning” is when faced with loss and fragmented identity as an Asian-American immigrant. I found myself consumed in the teeth of a poet so brave and sure of what he is doing in the face of such uncertainty. The book spit me out with a reorientation to the fraught rhythms of the ground I inhabit as an American. Night Sky With Exit Wounds resounds as the unforgettable record of a singular voice that must be read and heard again and again and again.