What if Martin Luther had had a Facebook page?

I worked with Celine Dauverd, of CU's History Department recently on a project that mixed design, research, and social awareness in an interesting way.

Professor Dauverd wanted her students to produce a public display in which their individual contributions - 11 X 17 inch posters - would collectively inform viewers of little-known aspects of medieval history. The assignment would emphasize the use of parody, especially that achieved in looking at history through a modern lens, and would generate work that was humorous yet informative. Cleverness would be highly valued, but historical accuracy would be critical. At least that was the intent.

My job in helping the class was centered on coaching students through the concept and design process, as well as on working with staff in CU's Norlin Library to secure a physical space for the display. 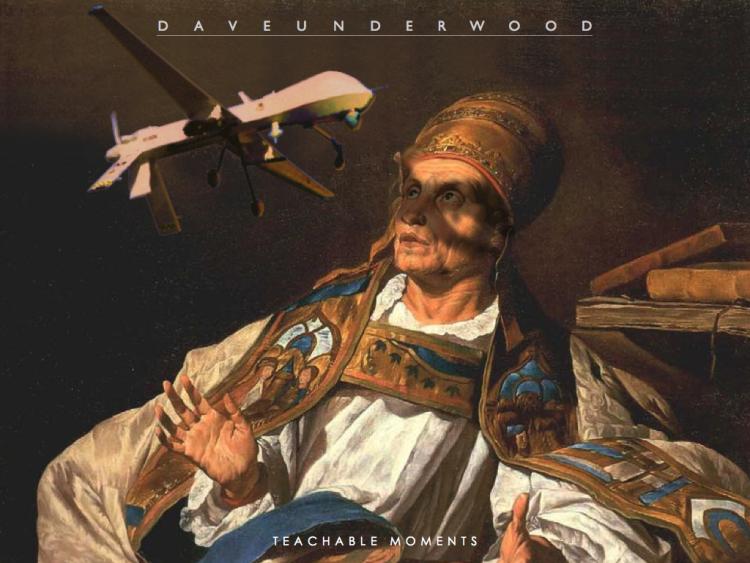 Figure 1: The author's title slide for a class lecture on historical parody

Before the students started on the creative process, it seemed like a very good idea to give them some sense of how the project might look, both in terms of its final presence in the library, as well as in the ways parody might be stretched to inform and entertain. I've found that visualizing a finished product can be immensely helpful in getting students underway. Too often, it seems, we assume students see the same goals we see in exactly the same light. With multimodal expression, this miscalculation is often in play, and providing a class with mockups, exemplars, and past student work is useful. To this end, I roughed-out a few ideas, which mixed parody and historical fact, as well as a mockup of the final installation. It never hurts to paint a picture. 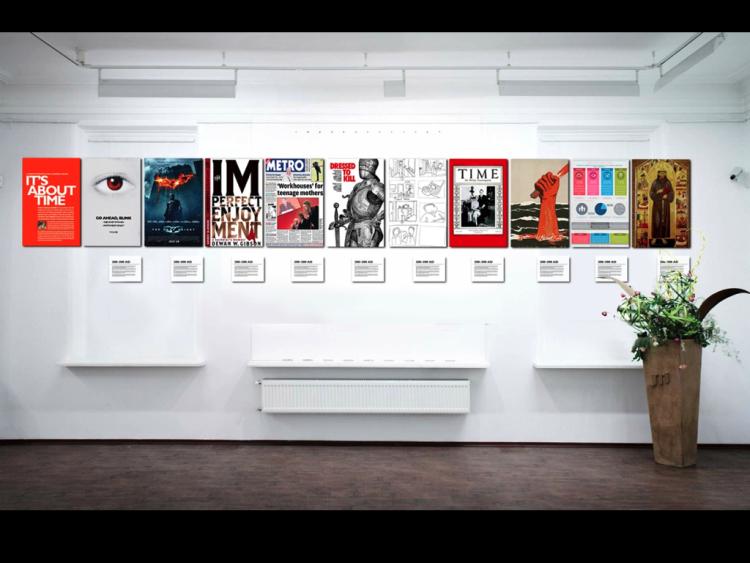 Figure 2: The author's graphic mockup of the final installation, intended to offer students both incentive and clarity

Having ideas is one thing, but, for many students, executing them is quite another. How do you get a clever piece put down on paper when you've never used design software? Students are invariably amazed when I recommend PowerPoint as their tool of choice. This makes sense because they've been accustomed using the application for presentations and little else. And even though, in the "real world," a designer wouldn't touch a project like the parody poster without Adobe's InDesign at their side, for students in a general history class, it's hard to beat the flexibility and familiarity of PowerPoint.

In my initial visit with Dr. Dauverd's class, I discussed the fundamental difference between vector, or object-based graphics, and paint, or raster-based graphics. I'm always keenly sensitive to coming across as too geeky when talking with students about pixels and Bézier curves, but splitting the digital design world into these two broad categories is helpful. Sure, the primary purpose of an assignment like the historical parody poster is to get students thinking about message and audience, but if foundational and relatively painless lessons concerning digital graphics can be learned along the way, then why not?

PowerPoint, like InDesign, straddles the raster/vector divide beautifully, and though one feels a bit as if one is decorating a cake in welding gloves when using the application, it does a commendable job of composition. I show most students embarking on design projects how to custom-size a PowerPoint file and how to import a "base plate" raster image over which text and other page elements can be layered.

In working with classes on design projects, I've learned that two related variations on an assignment can radically affect the overall class dynamic: producing real work for the common good and producing work for public consumption. Dr. Dauverd's students would be creating works that would be on display in CU's Norlin Library for up to a year. In terms of student pride and effort, that's a game-changer.

Doing "real work" for the common good will be discussed elsewhere on these pages. Within the context of supporting Dr. Dauverd's class, the common good of the project was nothing less than edification and, of course, entertainment; sharing arcane knowledge of a Medieval subject in a humorous way with the general public had appeal, at least for most of the students involved.

Having one's work put on public display -  whether it be in the form of simple art or as a persuasive or informative piece - asks that one do at least a better than average job. Anecdotally, I know this to be the case because the number of students asking for extra, office-hours-style coaching and support is always substantially higher in classes in which the end projects will be publicly visible. Few students want to be embarrassed for weeks, possibly months, or - in the case of the Internet - indefinitely, by lousy work.

What could readers a generation hence learn about us by looking at a current issue of The Onion? Or by watching The Daily Show? A lot, I'm willing to bet. They would not only get a good look at the issues of our times, but also at how those issues were publicly received. Humor can tell us as much about ourselves as any dry narrative. It can also make the curriculum fun.

Some students in Dr. Dauverd's class latched onto this concept immediately, and required only the slightest bit of help with getting their ideas on paper. 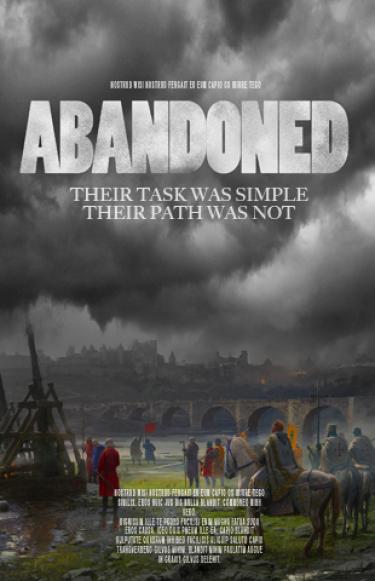 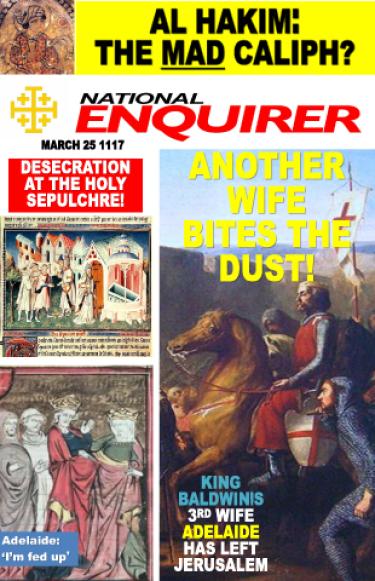 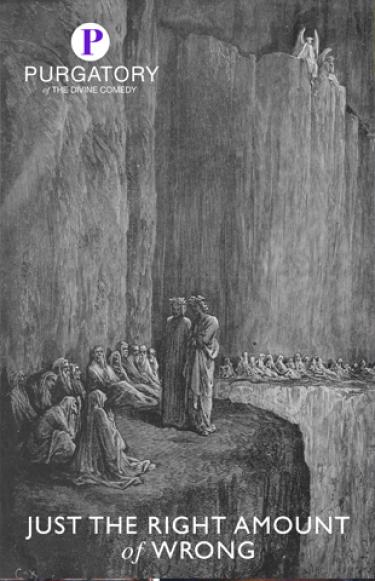 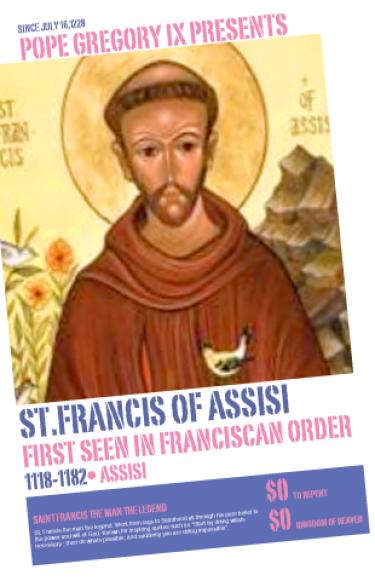 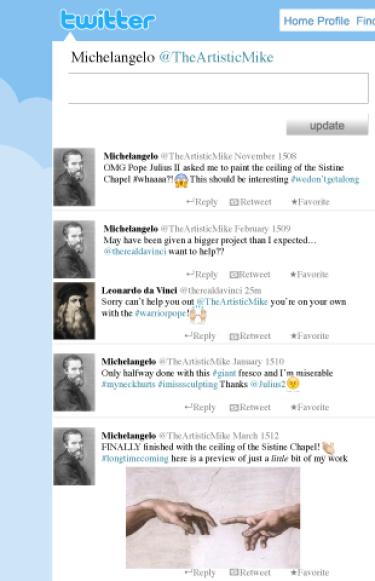 Figures 3 - 7: Students ran the subjects of their research through a wide array of filters, from movie posters to tabloid covers, and from magazine ads though 'rock' posters and, yes, Michelangelo's Twitter account.

For the most part, students took to the project with great enthusiasm, and their work was imaginative and very smart. Many of the budding parodists I helped had multiple ideas on how to fulfill the assignment, and our coaching sessions were often spent sorting through a multitude of treatments, looking for those that were the most effective.

Other students struggled. Though they lived in a world rich in irony and satire, it was hard for them to see how a parody-based treatment could be brought to bear on their chosen topic. For these students, I found showing them other examples of working parody, as well as coaching them through a series of what-if questions helped to get the ideas flowing. "What if Martin Luther had had a Facebook page?" "What if the relatively new - for the times - idea of Purgatory had been pushed along by a savvy marketing group?"

Just as telling a good joke comes more naturally to some people than others, so too does wielding satire.

I have to confess to having enjoyed working with Dr. Dauverd's students more than most. Many of them displayed raw glee when their ideas began to take on life and it was huge fun being a part of that. Sure, I routinely see students excited about their work... but in this class, the elements of humor, irony, and sarcasm appear to have kicked things up a notch. In a sense, Dr. Dauverd's assignment had aspects of public performance threaded through it, and helping the class prepare for prime time was an unmitigated blast.

From the instructor's side; Dr. Dauverd's take on teaching with parody

Celine Dauverd shares her thoughts on using parody as a teaching tool. Spoiler alert: she intends to repeat the assignment.