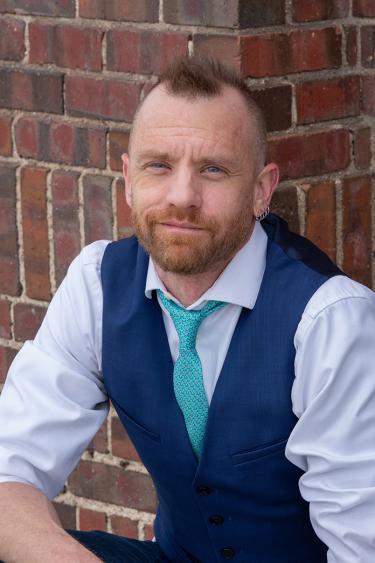 A Colorado native with some Texas roots, Troy graduated with a BFA from Colorado State University and then completed The Second City Training Center Conservatory Program in his adopted hometown of Chicago. He toured the country, falling down a lot with The National Theatre for Children, was repeatedly killed with the brilliantly irreverent Defiant Theatre (RIP), and overcame any vestige of modesty with the fabulously campy Hell in a Handbag Productions. Experienced and trained in stage combat, he has enjoyed serving as Fight Captain for Foothills Theatre Company for their Shakespeare in the Park productions. Some of his favorite, recent roles include Stephano in The Tempest, Detective Cole in Stop Kiss, and Tybalt in Romeo and Juliet. Troy is also a proud member of SAG/AFTRA and grateful for all the work his union has done to provide safer working conditions.

Troy began the Master's program at CU Boulder in Theatre and Performance Studies in 2020. From his first-ever role at CSU in Extremities, he has had a tendency to play the more horrible characters. With an arsenal of scumbags, ne'er-do-well’s, and frequent stage deaths (as many as 5x in a single show - twice) Troy has developed a strong interest in bad-guy roles. At CU, Troy is now taking this experience and affinity with the characters we love to hate and making this the focus of his research - Villains. Specifically, he is looking at the psychology of playing villains to discover the impact of roles that inflict physical or emotional harm on others in order to better understand how to prioritize safety and mental health for the performers on and off stage. In short, he will develop approaches to playing villains that avoid creating genuine villainous experiences.

Outside the theatrical realm, Troy is an accomplished distance runner (marathons mostly), quiet vegan, and animal activist. He truly lovely nothing more than a good rainstorm, a hot cup of coffee, and doting heavily with his wife on their Westie, Maggie Mayhem.