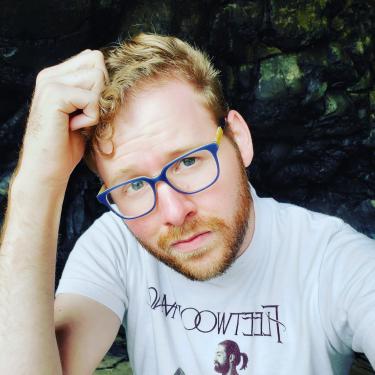 Sebastian “Seabass” Kearney (they/them) is excited to return to the field of academia here at CU Boulder. After graduating from Western Kentucky University in 2013 with a BA in Theatre they worked as an actor with Pandora Productions in Louisville, KY before taking residency in Bowling Green, KY as a lighting designer with The Public Theatre of Kentucky. These past five years, however, Sebastian has spent much of their stage time performing Stand-Up Comedy or working with assorted Improv teams in Portland, OR.

Some of Sebastian’s favorite scripted roles include: Wallace, Andrew (Standing on Ceremony), the Voice of Audrey II (Little Shop of Horrors), and Le Chevalier de Danceny (Les Liaisons Dangereuses). They’ve also had the joy of designing lights for such productions as: Wait Until Dark, The Miss Firecracker Contest, Inside Out Atlas, and Oddly Puddle is From Inner Space. Aside from scripted work Sebastian led their university’s improv team, Happy Gas, for three years and has taught improv workshops for youth and adults.

Their love of improv and its applications were a major contributing factor in their decision to pursue graduate studies. They can quite literally talk about it for hours. (You’ve been warned). They’re also excited to explore the ways theatre can be used as a forum for discussing social change. Being gender-fluid, they’re keenly interested in how gender is presented in performance as well as the intersectionality of sex, gender, vulnerability, & performance.

When not focused on the theatrical you can find Sebastian looking into all things nerdy such as comic books, mythology, video games, and D&D.