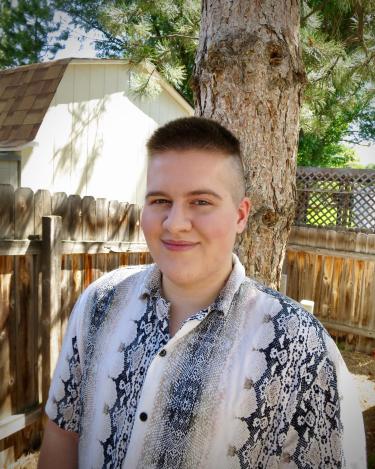 Matthias Bolon (he/him/his) grew up across the U.S, living in such states as California, Utah, Ohio and Colorado. He has spent most of his time in Colorado enjoying the Rocky Mountains. Matthias has been interested in theatre since his mother took him to his first Shakespeare play at the Utah Shakespeare Festival when he was eight. Since then he has delighted in watching Shakespeare performances, adaptations and retellings.

Matthias earned his AA in General Studies at Front Range Community College before transferring to CU Boulder. He recently joined the Bachelor’s-Accelerated Master’s program in the spring of 2021. He is currently finishing his Bachelor’s in Theatre during the coming school year (2021-2022) before starting his accelerated Master’s year (fall 2022). As a transgender student he is interested in researching how the concept of gender and masculinity are depicted in Shakespearean works and modern theatre.

Matthias enjoyed his first acting role at CU as Chuck Biggs in She Kills Monsters: Virtual Realms last spring, and acting in Student Directed Scenes. He looks forward to continuing to work with the department.