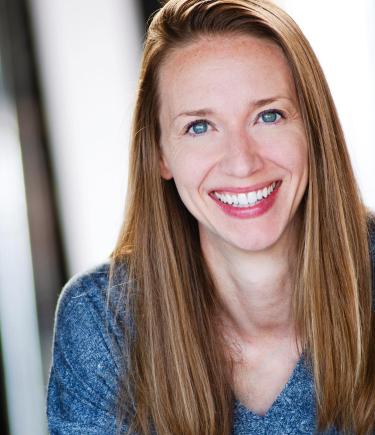 Emily K. Harrison is an actor, writer, director, and producer living in London, England/Boulder, Colorado. The founder and producing artistic director of Boulder-based, award-winning square product theatre, she holds an MFA in Performance from the Savannah College of Art & Design, a PhD in Theatre from the University of Colorado, and a BA in Theatre Studies from Boston's Emerson College. Recent acting credits with square product include: JonBenét Ramsey in House of Gold; Amy in She  Rode Horses Like The Stock Exchange; The Aunt in This Aunt is Not a Cockroach, co-created and produced by square product theatre and Hoarded Stuff Performance; Li'l Bit in  How I Learned to Drive; Ham Jones in Ham McBeth and Tiger in SLAB, both original works created and produced by square product theatre; Peggy Jo Tallas in Peggy Jo & the Desolate Nothing, co-created and produced by Buntport Theater Company and square product theatre; Heather in Gidion’s Knot; Natalie in The Ding Dongs; and Dale in 5 Lesbians Eating a Quiche (2012 and 2014). Additionally, Emily has worked with theatre companies across the region, including the Denver Center for the Performing Arts, Buntport Theater, the Colorado Shakespeare Festival, Curious Theatre Company, Local Theater Company, and Screw Tooth Productions. For more than a decade Emily has served as a Lecturer in the Theatre & Dance Department at CU Boulder, as well as in the BFA Performance Program, the Music Program, and the Jack Kerouac School of Disembodied Poetics at Naropa University, and is currently serving as a Guest Artist teaching coursework in acting, playwriting, directing, devising, and script analysis in the Theatre Programme at Brunel University London. She was featured as part of Westword’s original “100 Colorado Creatives” series and was recognized by The Denver Post as a 2011 Pathmaker, one of only seven individuals working in an arts field to receive the honor. In 2016 she was awarded a shared True West Award.