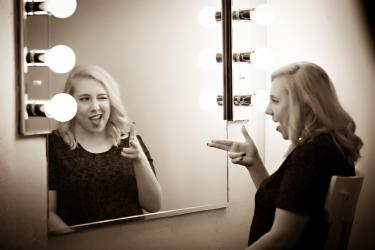 Cailyn (she/they) often referred to as ‘Cail’ by their dear friends, relocated to Colorado from Iowa after she finished with Bachelor’s degrees in Theatre and Communication Studies at Central College. The combination of these degrees has made them love creating art that is representative of marginalized groups. Though, with more than eight years of theatre experience, she can’t even begin to list the productions she has been involved in. Regardless, she is driven to thwart overrepresented groups of the dominant ideology in representation of under/misrepresented demographics. As a queer woman, she is especially interested in their own identities as well as intersectionality with identities different from their own and disrupting hegemonic understandings of gender/sexuality. In doing this, she hopes not only to provide basic visibility but to support a space of protest through performance: a Brechtian concept in which she aims to make audiences act within, reflect on, and alter their realities. She longs for the art that comes out of conflict.

As a member of Alpha Psi Omega, national theatre honor society, and former president of the Alpha Zeta cast, it is not difficult to see the passion Cailyn has for performance. However, she is also very passionate about their aussiedoodle Finn and trips to the dog park.

Here are a few parting subjectively fun facts about Cailyn: