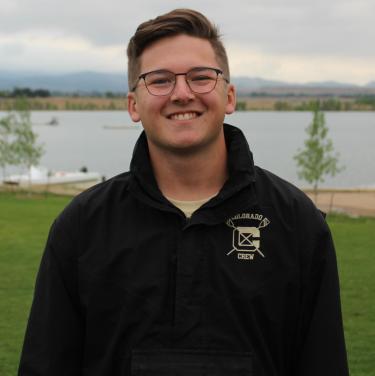 Troy first started rowing his freshman year at CU. Some of his friends
from high school and his cousins had talked off and on about rowing
but it wasn’t until attending connect at the Rec during the first week
of college that he decided to give it a try. During his time with
Colorado Crew, Troy was fortunate enough to be chosen to represent the
The University of Colorado along with eight others to row at the Head of
the Charles Regatta in Boston, Massachusetts in the fall of 2017 which
is one of his most cherished memories.

After graduating from CU with a Bachelor’s degree in Communication,
Troy is proud to coach the crew team at his alma mater. This will be
his first year as a coach and he is excited to bring the next
generation of Colorado Crew athletes to their peak performance.

In his spare time, Troy enjoys playing with his puppy Gemini and
learning about space-related topics. He is currently in the process of
becoming a pilot.