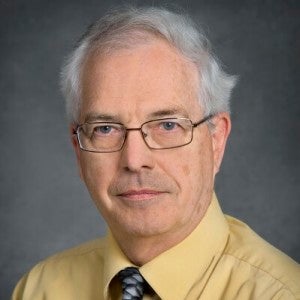 Abstract:
Artificial photosystems that accomplish the complete cycle of converting CO2 and H2O to fuel on the shortest possible length scale – nanometers – avoid efficiency degrading ion transport resistance losses and unwanted side reactions while opening up an immense design space for scale-up. We are developing a Co oxide-silica core-shell nanotube array in which each core-shell tube operates as a complete, independent photosynthetic unit. The ultrathin silica membrane separates the Co oxide H2O oxidation catalyst from light absorber and CO2 reduction sites and transmits protons but blocks O2. Precise control of electron transport across the insulating silica membrane is accomplished by embedded molecular wires with properly chosen orbital energetics.
After briefly introducing the synthesis and structural characterization of square inch sized core-shell arrays, emphasis of the talk will be on the structural and functional properties of the core-shell nanowall, which is the center of photocatalytic action. Electrochemical impedance spectroscopy reveals orders of magnitude higher for H+ flux across the multilayer oxide wall than required at highest solar intensity and provides mechanistic insight into proton transport across the ultrathin oxide layers. Polarized FT-IRRAS allows monitoring of the structure and orientation of the silica embedded molecular wires, and of the interfacial structure of the ultrathin oxide layers that compose the nanotube wall. Pathways of photo-induced charge separation and transfer of holes to Co3O4, and electrons to CuxOy catalyst surfaces, are elucidated by ultrafast optical and transient FT-IR spectroscopy. If time permits, our effort to incorporate 2-photon tandem light absorption into the nanowall will be discussed.

Bio:
Dr. Heinz Frei is a Senior Scientist at Lawrence Berkeley National Laboratory. He studied chemistry at the Swiss Federal Institute of Technology (ETH) Zurich (PhD in physical chemistry 1977). After a postdoctoral stay at the Chemistry Department of the University of California at Berkeley, he started a research group in solar photochemistry at LBNL with focus on chemistry with near infrared light, work for which he received the Werner Prize of the Swiss Chemical Society in 1990. Over the past two decades, Frei has established new methods for utilizing visible and near infrared light for the environmentally friendly synthesis of useful chemicals, and for the chemical storage of solar photons. He has developed time-resolved FT-infrared spectroscopic methods for unraveling mechanisms of heterogeneous catalysis under reaction conditions. Currently, his research effort focuses on the scientific challenges of the direct conversion of carbon dioxide and water to a liquid fuel by artificial photosynthesis. He served as a Deputy Director of LBNL’s Physical Biosciences Division (1998-2007) and the Helios Solar Energy Research Center (2008-2011). Frei was one of the founding scientists of the Joint Center for Artificial Photosynthesis (JCAP, the U.S. Dept. of Energy Innovation Hub for Fuels from Sunlight), Leader of the Center’s Interface Project 2010-2015, and Acting Dept. Head of JCAP at LBNL in 2012. A frequent plenary lecturer at international conferences and member of U.S. Department of Energy workshop panels and advisory groups for foreign science foundations, he has co-organized several symposia on solar photochemistry in the past few years and is Joint- Chair of the 2016 Gordon Research Conference on Solar Fuels. He was elected Fellow of the American Association for the Advancement of Science in 2014.