The Cosmic Twilight Polarimeter (CTP) is the first ground-based proof-of-concept experiment being developed to measure the low-frequency foreground spectrum with polarimetry. 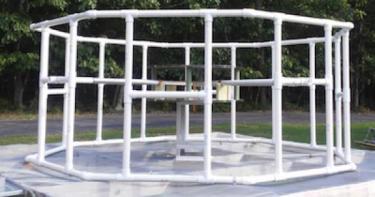 Assembly of the Cosmic Twilight Polarimeter, a prototype for a future instrument to observe the 21-cm global cosmology signal from the first stars & galaxies to be placed in lunar orbit.

The CTP consists of a pair of broadband (60-120 MHz) sleeved dipoles on a finite ground plane with the antenna pointing at the north celestial pole. The CTP does not measure the intrinsic linear polarization from the synchrotron emission as does traditional polarimetric measurements in radio astronomy. Instead, the experiment focuses on the projection-induced polarization arising from anisotropy in the foreground source distribution.

The spatial variations in the foreground emission, contrasting to the relatively isotropic cosmological 21-cm background, induce a non-zero net composite linear polarization onto the broad antenna beam fixed on the ground.

The CTP is designed to measure this net composite polarization by sampling the Stokes parameters, which are used to parametrize different orientations of the polarization. As the foreground revolves continuously about the celestial pole, as observed by the sleeved dipoles, a unique sinusoidal signature (modulation) with angular frequency consistent to twice the sky’s revolution rate is imprinted on the polarization measurement as a function of time. 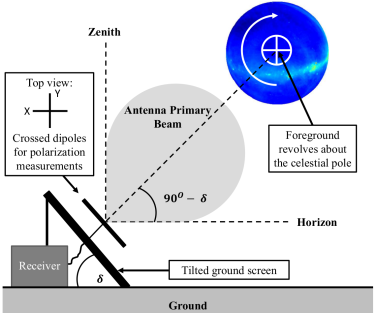 The CTP is planned to be deployed in the Green Bank Observatory located in the National Radio Quiet Zone for preliminary testing and early observation. Careful analysis and thorough evaluation of the CTP is being carried out.

This dynamical signature in the Stokes measurement results in a second-order harmonic when the Stokes parameters are Fourier decomposed from the time space to frequency space. The magnitude at the second-order harmonic represents intensity of the measured projection-induced foreground polarization. By compiling the second harmonics, channel by channel across the frequency band, a duplicate of the foreground spectrum is constructed, which is free from the background 21-cm signal. Meanwhile, the total-power, consisting of the foreground and background signals, is also measured through Stokes I. Thus, two separate spectra are measured simultaneously yet distinctly from the same set of Stokes parameters. One has both the background and foreground signal, whereas the second-harmonic spectrum only captures the foreground information. In principle, the isolated foreground spectrum can then be used to subtract out the foreground portion in the total-power spectrum and reveal the embedded 21-cm spectrum.

This non-parametric strategy for estimating the contribution from unpolarized diffuse foregrounds to the cosmological 21-cm measurement is described in more detail in Nhan, Bradley, & Burns (2017).

EDGES is a pioneering ground-based experiment operating since 2006 in Western Australia that has set limits on the global redshifted 21-cm signal (Bowman & Rogers 2010). EDGES observes from the Murchison Radio-astronomy Observatory (MRO) in Western Australia, which is an officially recognized radio-quiet site that hosts large interferometers such as ASKAP, MWA, and the future SKA-Low. EDGES is a collaboration between Arizona State University and MIT Haystack Observatory. 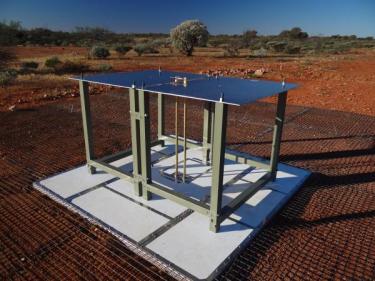 EDGES measures from Western Australia the sky-average brightness temperature at frequencies between 50 and 200 MHz, which corresponds to the redshift range 27 > z > 6 for the 21-cm radiation from neutral hydrogen.

EDGES conducts total power single-antenna measurements throughout the day as the sky drifts above the zenith-pointing antenna. Between 2006 and mid-2015 the antenna corresponded to a Fourpoint model over a metal ground plane, selected due to its low reflections and low frequency-dependence of the beam (or beam chromaticity). This antenna and instrument were tuned to the range 100-200 MHz, aiming to probe the 21-cm signal from the Epoch of Reionization (EoR) (13 > z > 6).

In 2015, the Fourpoint antenna was replaced by a Blade model with a larger (> 10 m x 10 m) ground plane, which produces smoother reflections and lower beam chromaticity (Mozdzen et al. 2016). Also in 2015, EDGES deployed a second, completely independent Low-Band instrument that operates in the range 50-100 MHz. This instrument aims to detect the absorption trough predicted from the cosmic dawn (27 > z > 13). 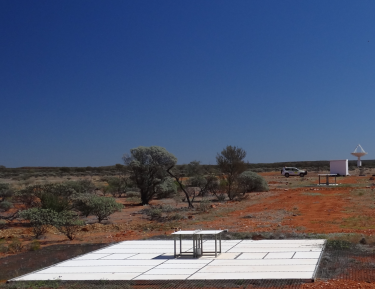 The sky measurements are calibrated by, first, switching continuously in the field between the antenna and two smooth reference noise levels injected at the input of the front-end low-noise amplifier. This step represents a relative calibration that removes the time-dependent system gain and offset. Next, EDGES applies an absolute calibration obtained from lab measurements, which brings the relative calibration provided by the internal switching, to an absolute temperature scale at the receiver input. This absolute calibration accounts for the imperfect impedance match between the antenna and the receiver (details of this process are provided in Monsalve et al (2017). The final step in the calibration consists of compensating for the effect of antenna losses and beam chromaticity. These effects are estimated from measurements, as well as from analytical and EM modeling (Rogers & Bowman 2008, 2012). 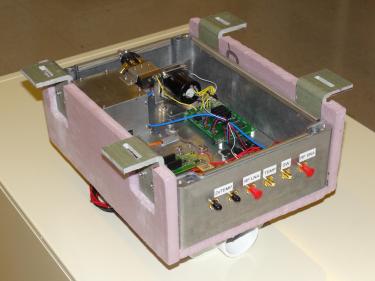 Measurements from EDGES have enabled to put constraints on the duration of the EoR. Specifically, they rule out durations shorter than 0.06 (Bowman & Rogers 2010). In addition, they have been used to determine the spectral index of the diffuse foregrounds (Rogers & Bowman 2008; Mozdzen et al 2017). They have also yielded an estimate for the fluctuations in the ionospheric absorption above the MRO (Rogers et al. 2015).Work is underway to derive much stronger constraints on the global 21-cm signal from data taken by both instruments during the 2015-2016 season.

Visit the EDGES webpage at Arizona State University or the EDGES memo series at Haystack Observatory for more information.