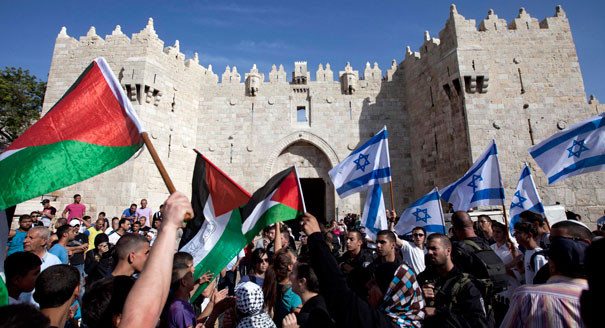 The protracted conflict between Israel and the Palestinians has continued to dominate international discussion and attention. Despite various peace plans and initiatives, the ostensibly interminable negotiations within the international community have yet to yield an effective resolution. The immobility of peace is powerfully demonstrated in the aftermath of the 1993 Oslo Peace Accords. The original optimism accompanied to the accords was tied to two unprecedented resolutions. The first was an agreement to mutual recognition between Israel and the Palestine Liberation Organization (PLO).[1]​​ The newfound recognition between the respective parties legitimized the political struggle of the PLO. This, in turn, allowed for the second resolution within the accords: the Palestinian’s right to self-governance of major cities in the West Bank and the entire Gaza Strip.[2]​​ The accords were the first agreements between the Palestinians and Israelis since the creation of the Israeli State. However, the hope that accompanied the resolutions quickly faded after the assassination of the Israeli Prime Minister and signatory, Yitzhak Rabin, brought the peace process to a halt.[3]​ ​ Since the signing of the Oslo Accords, the number of ​Israeli settlers in the West Bank has quadrupled​ and tensions continue to rise.

Academic perspectives on the elusiveness of peace between Israel and Palestine are largely focused on security concerns, socioeconomic differences, gaps in historical narratives, and the influence of external actors like the United States.[5]​​ A central but hidden feature to the perpetuity of the conflict lies in Israel’s political institutions. As a parliamentary system fit with a judicial, executive, and legislative branch, Israeli politics are equipped with strong, democratic institutions.[6]​​ These institutions, though structurally progressive, contain two characteristics that may encumber the peace process with Palestine:​ ​government responsiveness and religious-political identity. An analysis and developed understanding of these features is vital to comprehending the enduring failure of Israel-Palestine peace efforts.

A cornerstone of democracy is the safeguarding of government responsiveness – the receptiveness of institutions and political figures to the demands of their constituents. Government responsiveness theoretically ensures accountability for political leaders. While this is crucial for the government’s provision to the public’s needs and desires, it creates spoiler actors whose interests are threatened by compromises involved in peacemaking.​[7]​ Any compromise, such as the removal of Israeli occupation in Palestinian-governed Gaza, as fought for in the Palestinian Intifada, will inevitably yield unhappy constituents.[8]​ ​ Consequently, spoiler actors protect their power by inhibiting the implementation of peace accords and thwarting peace processes.

The unique structure of Israel’s parliament, the Knesset, reinforces the need for political leaders to act as spoilers. In an election, citizens vote for a political party rather than individual candidates.[9]​​ Parliament seats are then apportioned based on the percentage of votes each party receives.​[10]​ After the election, the majority party leader must form a ruling coalition with at least 61 members to claim a majority of the 120 seats.​[11]​ Historically, no elected group has attained all 61 seats, so the larger parties incentivize smaller factions to join the coalition in return for the passage of their pet bills.​[12]

Currently in power is the center-right Likud party led by Prime Minister Benjamin​ Netanyahu, who last year ​pledged to annex territories in the West Bank​.​[13] Similar right-wing proposals from the supporters in Netanyahu’s coalition go against the desires for peace from a large number of Israelis and Palestinians. However, Israeli leaders cannot compromise to Palestinians’ minimum requirements – the return of refugees, a capital in East Jerusalem, and a contiguous Palestinian territory – without breaking their coalition.

The second key characteristic to understanding Israel’s continued hindrance to peace processes is the country’s role as a Jewish state. The resilient integration of Judaism in Israeli domestic politics undermines peace resolution for two reasons: the authority of orthodox Judaism in domestic politics and the encouragement of religious attachments to Palestinian space.

Although they insist on neutrality, ultra-Orthodox parties continue to diverge from their historic bipartisanship and lean towards Likud as the Israeli left becomes increasingly more secular.​[18]

Ultimately, the newfound alliance between the Likud camp and ultra-Orthodox hegemony strengthens right-wing interests in Israeli domestic politics, which, in turn, are inherently opposed to compromise with the Palestinians.

Furthermore, the dominance of religion in Israeli domestic politics reinforces the public’s Jewish identity and subsequently strengthens feelings of religious attachment to sacred, but Palestinian land. In the West Bank, Jewish settlers relentlessly reject Palestine’s legal right to self-governance, as established in the Oslo Accords.[19]​​ To some settler sympathizers, this land was the heart of biblical Israel and hence central to Jewish identity.[20]​​ For many, settlements in the West Bank are a violation of international law and a critical impediment to a peace agreement between Israel and Palestine.​[21]

Ultimately, the institutional and religious flaws of Israeli domestic politics testify to the irreparable, degrading relationship between the Israeli state and the Palestinian people they have unremittingly wronged.