Rhetoric and the Trump Presidency: Hate Speech vs. The First Amendment 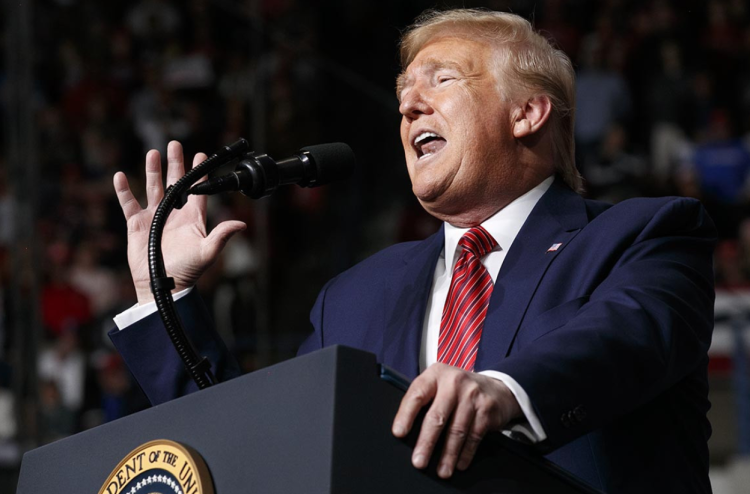 Rhetoric and the Trump Presidency: Hate Speech vs. The First Amendment

By Dylan Yachyshen and Elizabeth Mather

In 2016, Donald Trump won the presidential election as an outspoken right-wing populist railing against the “political swamp” in Washington. Three years later, his capricious actions and potent rhetoric have prompted passionate reactions from both sides of the aisle. In defense of Trump, the political right frequently invokes the first amendment when concerning Trump’s endeavors, absolving Trump of any ostensible harm caused by his parlance while the left accuses Trump of enabling hate groups and inciting conspiracy. Each perspective has reason, but does Trump’s rhetoric and its role in his rise to power share similarity with other xenophobic, right-wing groups from the past, or is the U.S simply experiencing a new enigma that tests its resolve to its first amendment protections?

The right tends to hail Trump as a defender of free speech and individual liberty, not as enabling hate groups. During Trump’s three years in office, he has heavily criticized the left for attempting to limit free speech, established a white house survey to measure political bias in social media and used his constitutional right of freedom of speech to bring new and polarizing perspectives to the political discourse. To the right, each of these instances represents how Trump has established himself as a defender of the first amendment and demonstrates how the left attempts to limit perspectives it does not want to hear. However, Trump’s adamant defense of free speech correlates with a spread of conspiracy theories, fake news accusations and increasingly radical groups defending hateful views with their right to free speech.

Certain groups have taken Trump’s galvanization of the first amendment and, arguably, used it to emerge from dark corners of the internet and find a home in mainstream media. Some of these groups argue that the left wants to establish a totalitarian society that employs doublespeak and does not foster discourse, notably with issues concerning racism and referring to people’s pronouns, holding that “political correctness is a liberal mind control strategy.” Groups on the right maintain that calling someone by a pronoun other than the pronoun received at birth is the left’s attempt to imbue society with Orwellian “doublespeak”and slowly transition the United States toward a totalitarian, Big Brother-like state.

Trump’s defense of free speech and right-wing populist rhetoric have widened the boundary for what society defines as acceptable. From the perspective of the political right, this is simply the president encouraging more perspectives and preventing the left from taking the U.S down the path to totalitarianism.

The political left argues that the divisive rhetoric Trump employed during his presidential campaign, and successive election, emboldens hate groups and encourages hate crimes, citing the increase in hate crimes and groups that occured after Trump’s ascendance to the presidency. Political commentators dub this the “Trump Effect.” The Trump era commenced with alienating and targeting language in campaign speeches, and the left believe Trump has not only sustained this diction, but has developed it into bigoted comments that dominate political discourse, leading many to characterize Trump as blatantly racist. Consequently, in late 2019, Democrats in the House of Representatives, and even some Republicans, passed a “nonbinding resolution” denouncing Trump’s “racist comments that have legitimized and increased fear and hatred of new Americans and people of color.”

The left often cites President Trump’s persistent tweeting and exploitation of social media  as evidence of his intentions to spread conspiracy and propaganda online. Used as an arena to push back against critics, an outlet for self-affirmation, and space for propositions of policy, the left criticizes Trump for his activity on social media platforms, notably Twitter, without any regard for the ramifications of his words. In 2019, an investigation by the Federal Bureau of Investigation found that Trump had retweeted posts from at least 145 unverified accounts who pushed extremist content and incited conspiracy. Since then, Twitter has suspended more than two dozen of these unverified accounts for the expression of white nationalist and anti-Muslim views while the FBI has labeled many of these accounts a potential national security threat.

These facts do not go unnoticed. The political left expresses concerns about the nonchalance with which Trump endorses hate groups through his use of social media, along with his reactions to hate-fueled violence in the country. Trump’s infamous response to Charlottesville, Virginia’s “Unite the Right” rally where he stated there “were fine people on both sides” ignited a charged response from the left, as the rally was branded as far-right, racist and tied to white supremacy months before it occurred.

Trump’s rhetoric undoubtedly pushes boundaries and his diction rallied supporters behind him during his campaign and continues to do so. It is important to analyze the consequences this rhetoric carries, as violent words can lead to violent actions.

Right-wing populism approaches issues such as sovereignty, patriotism, law and order, and immigration from a right-wing and conservative perspective. Like other populists, right-wing populists oppose the establishment as a whole and highlight anti-elitist sentiments but focus on us versus the “other” ideas to attract support and find scapegoats, such as immigrants, for domestic issues.

President Trump’s campaign played evoked a strong us versus the “other” view in the state of domestic politics. Throughout his presidential campaign, Trump used collective pronouns to divide the United States versus other countries, specifically China and Mexico, as well as to address his supporters versus his critics. Trump also frequently invoked, and still does, the “fake news media,”  lambasting publications that portray him as negative. Although the media does make errors, Trump and his base, and autocrats around the world, have taken to labeling any critics or contrasting viewpoints as false. This gaslighting also enables radical groups to employ “fake news” defenses when accused of extreme, hateful views. By 2018, hate groups in the United States had risen to a record high of 1,012, following three years of decline under the Obama administration. Although this phenomenon is only a correlation, observing Trump’s rhetoric, one can understand how hate groups could feel emboldened. The virulent movements his words and actions unleash may easily take a life of their own.