Can’t Do With, Can’t Do Without: The Use of Private Military Contractors in U.S. War Efforts 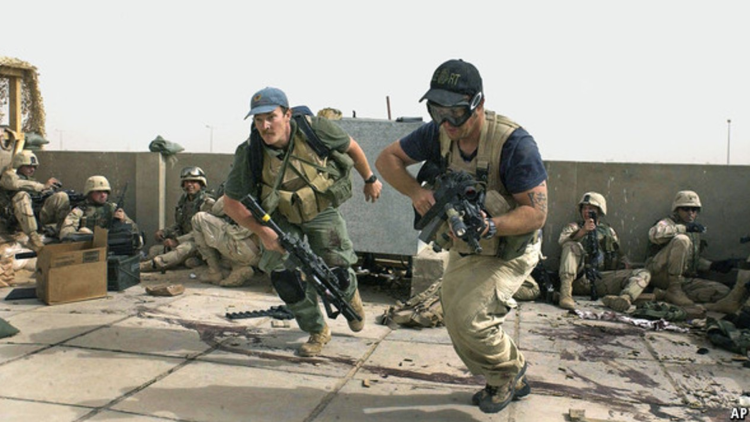 Can’t Do With, Can’t Do Without: The Use of Private Military Contractors in U.S. War Efforts

By Ellie Stanton and Josh Frank

As militarized conflict in the Middle East continues, notably in Afghanistan, global powers present in the region are exploring alternative methods to using national armies abroad. While stationing troops abroad to conduct inter-state warfare is the norm, intra state or civil war can require different strategies in order to address the guerilla fighting tactics employed by insurgents in politically unstable countries. Countries now increasingly use private military security contractors, or PMSCs, to this end. These soldiers, instead of being employed directly by a state government, are part of a private collective, paid to perform security-related tasks in conflicted states. Blackwater, a notable PMSC, was employed extensively in Iraq during the early-to-mid 2000’s. Since 2009, U.S. military operations in Iraq and Afghanistan increased the ratio of contractors to U.S. troops from 1:1 to 3:1. The use of PMSCs has dropped considerably since then, but new proposals to the United States and Afghan governments seek to reinstate PMSCs in Afghanistan, which carries significant concerns over the just use of force in warfare as well as the treatment of civilians in conflicted countries.

When voters call for an end to incessant war, some politicians promise to bring troops back home. Since his inauguration, President Trump has retracted U.S. military presence in northern Syria, Afghanistan, and soon East Africa. The withdrawals, however, come without concessions, and leave many of these regions riddled with instability and lingering power vacuums. U.S. General, Stephen Townsend, asserts that these short-sighted drawbacks threaten national security and cripple external actors’ ability to execute their missions. For the United States and a number of other international governments, private security firms like Academi (formerly known as Blackwater), promise an effective, but costly, replacement to American troops. To the United Nations and human rights groups, these PSMCs pose a growing threat to civilian safety and region stability, citing the impunity of non-state armed actors.

Many international human rights organizations such as the United Nations and the International Committee of the Red Cross have condemned the use of PMSCs in warfare. Both organizations address concerns over the compliance of PMSCs with international humanitarian law, as these private companies lack the oversight and accountability measures that apply to state military personnel. In a statement to UN Radio, a spokesman said “There’s a concern that [the contractors] aren’t necessarily going to be… in compliance with [the rules of warfare]”, the rules of warfare referenced being the Geneva convention. While the United States military has mechanisms in place to provide oversight, such as the ability to impose a court martial as punishment for crimes committed on the battlefield, these mechanisms are more difficult to apply to PMSCs due to their higher degree of separation from the government. As such, punishment for crimes committed for these contractors can be slow if not impossible to impose. These issues were most notably brought to light after contractors working for Blackwater, a private military outfit, massacred more than 14 civilians at Nisour Square in Baghdad in 2007.

Erik Prince, former head of Blackwater and brother of current secretary of education Betsy DeVos, has recently pushed for increased use of PMSCs in Afghanistan as a way to pull United States troops out of the country. This effort comes as a result of attempts to progress slow-moving peace negotiations with the Taliban. On this front, progress has been slow, potentially motivating the Trump administration to pursue alternative methods of warfare to increase incentive for the Taliban to negotiate. Prince, in an interview with Military Times, argues that implementation of PMSCs in Afghanistan would significantly reduce the costs of warfare in the region and increase the efficacy of military action. Prince also addresses the concerns over compliance with international law, stating that measures will be in place to ensure that no unlawful military activity would be conducted by the contractors.

The increased use of private militias has obscured and weakened international law. Under the 1989 International Convention Under the Recruitment, Use, Financing, and Training of Mercenaries, the use and recruitment of mercenaries is legally forbidden. The resolution, however, was ratified by only 35 countries. Large military powers like the United States and Russia, who rely heavily on PMSCs, have unsurprisingly withheld from the treaty. State interest in mercenaries attributes to notoriously flawed international law; one permeated in impunity and perforated in injustice.

Today, mercenaries are redefined as ‘private security contractors’ who work under ever-changing legal constructions. These dynamic structures create legal loopholes replete with poor records and human rights violations. Despite NGO and UN attempts to dissuade the use of PMSCs, the Private Military Service Sector is projected to grow to $420 billion by 2029. The allure of private military contractors lies not in their claimed efficiency and cost effectiveness, but political anonymity. PMSCs encourage ‘mission creep,’ a gradual (and sometimes covert) advancement of an original military campaign. As Congress does not consider private contractors as “boots on the ground,” the U.S. government can increase military presence without the American public’s knowledge. Consequently, PMSCs (and their corresponding actions) in international conflicts are rendered nearly invisible.

To address the conflict between the use of PMSCs and international law, it is crucial to shift responsibility to the state. As PMSCs adopt roles previously held by soldiers of foreign governments, their positions as “quasi-state actors” solidifies. Under this authority, PMSCs could be considered state agents and hence subject to general laws on state responsibility. This evolved understanding forges accountability and curtails the impunity that threatens civilian lives and wellbeing.