For years, Venezuela has experienced a tumultuous descent into both regime change and economic instability; today, longstanding President, Nicolas Maduro is being challenged by the Venezuelan National Assembly, and specifically, its front man and opposition leader, Juan Guaido. The economy has been on a steep decline for nearly a decade, a product of the declining oil industry that had long sustained and procured Venezuela’s economic success. The IMF has stated that in 2019, the inflation rate in Venezuela will hit 10 million percent. The minimum wage was raised 300% in January, making it approximately $6.70, and ninety percent of the population lives in poverty.  With such turmoil, international observers question whether Maduro will capitulate and hand over the government to Guaido, who has successfully procured the support of the majority of Western countries, or if he will continue his rule, with the support of countries such as Russia, China, and Turkey. 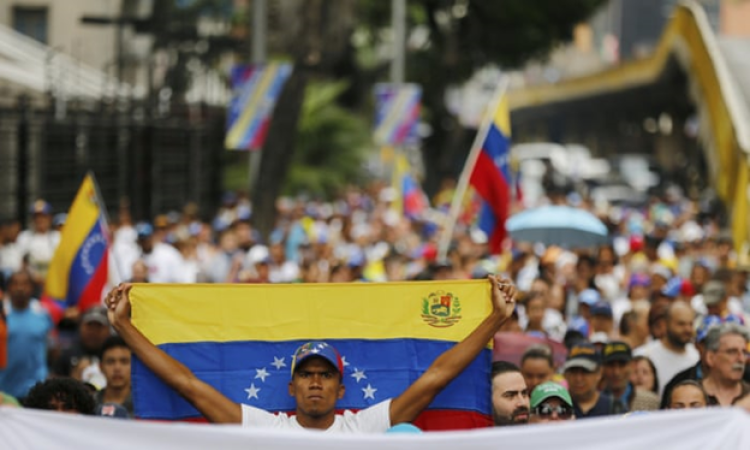 Venezuela has come to epitomize the dangers of “petrostatehood,” defined as a country in which three factors preside over the rest: a strong dependence on oil and natural gas as a primary export, a predominantly oligarchical government in which power is concentrated within an elite minority, and unstable governmental institutions that allow for corruption.  Hugo Chavez, Venezuela’s late president and Maduro’s predecessor, ignited this path when he nationalized the oil industry, specifically, PVDSA, Venezuela’s state-owned oil company.  Chavez’s candidacy for office was rubber-stamped with the promise to the lower-class majority in Venezuela to lift them out of their poverty and give rise to opulence through socialist policies.  Maduro, however, has had to grapple with the reverse of the oil boom, and worsening living conditions.  He has opted to consolidate his executive powers by reducing opposition and pursue anti-Western rhetoric his predecessor popularized.  Ideologically and economically, Turkey, Russia, and China, all have high stakes in the continued success of the Maduro government. For the most part, they do not acknowledge human rights abuses. The United States, most of the EU, and many Latin American countries, however, have condemned Maduro on humanitarian and ideological grounds.

What is the Western World Saying?

Both the United States and Europe prioritize upholding democratic principles.  History has seen the Western world intervene in regime change on an abundance of occasions, and Venezuela is no exception.  As Maduro has tightened his reins over Venezuelan citizens, countries like the United States sense a parlous threat to democratic tenets, especially considering the dire circumstances under which the vast majority of the citizenry is living.  Recent statistics show a 27,364 percent inflation rate.  Basic living necessities, such as toilet paper, eggs, and milk, are largely unavailable to the public. Western leaders are highly concerned about reports of any dissent leading to imprisonment and oppression. The West apprehends that all of these details pose a serious geopolitical and humanitarian dilemma that Western countries view as detrimental for not only Venezuelans, but the international community as a whole.  In the opinion of Western officials, if Venezuela continues along its trajectory, it could very well collapse, which would cause a calamity in the neighboring areas, namely, the Caribbean and Central America.  The inevitable mass exodus from Venezuela, that has already come into fruition, has led to a large influx of asylum seekers into the aforementioned areas, automatically increasing crime rates. Opposition leader and the head of the National Assembly, Juan Guaido, has named himself interim president of Venezuela, after contending that the vote count in last year’s election was manipulated in favor of Maduro, leading to a fraudulent result.  Nearly half of the members of the European Union have expressed solidarity with and support of Guaido’s leadership, and have vilified Maduro’s rule, citing his extreme violation of human rights as well as his undemocratic grip on the presidency, as major vindications.  President Trump has stated that US military force within Venezuela is “an option,” and has nailed Maduro with sanctions in order to restrict his access to the country’s foreign investments. All the while, efforts are being made on behalf of both European countries, such as Spain, France, and Britain, to secure humanitarian aid as well as provide asylum to Venezuelan refugees.  Leaders including French President, Emmanuel Macron, and Spanish Prime Minister, Pedro Sanchez, have joined the chorus of international opinions regarding the situation.  The West is asserting, for the sake of Venezuela and the rest of the region, that Maduro step down.

What are Russia, Turkey, and China Saying?

Venezuela has been engaged in economic alliances with countries including Russia, Turkey, and China, for years.  Vladimir Putin is speaking out against the United States’ interference in the Venezuelan predicament, claiming, for example, that President Trump is attempting to “blackmail the Venezuelan military” in attempts to democratize the government.  The Kremlin and Venezuela have been economically codependent since Putin’s rise to power in 2000.  Putin has made it a long-term goal of his to maintain amicable relationships with countries such as Venezuela that were allies with the former Soviet Union.  He has done so by exporting weapons and importing oil to and from Venezuela. Additionally, Venezuela owes Russia a significant amount of money, and the two countries have established a ten-year payment plan, one that the United States is attempting to derail with their sanctions on PDVSA.  Turkey, similarly, views the resistance to Maduro by the international community as a threat to its own authoritarian regime.  If Maduro remains in power despite the international pushback, it will align with the values of countries similar to Turkey, namely those that advocate for the final say of the state over civilians.  Turkish leaders are sympathetic to Maduro, especially following their own failed coup attempt in 2016, and see the West’s continuous attacks on him as unfair. Turkey has also been importing gold from Venezuela for refinement and processing for years.  While most NATO members are unanimous in their disdain for the Maduro government, Turkey is potentially acting as a counterweight.  China has invested millions of dollars into Venezuela, and the dissolution of the Maduro government could very well imply that China will never be repaid.  For countries like China, the continued support of Maduro almost entirely is defined in economic terms- if he fails, China too, will to some extent, fail.  Russia and Turkey are invested in the protection of Maduro’s rule because they largely see it as collateral economically, as well as symbolic of the survival of autocratic principles.

From a Political Science perspective, the resource curse establishes a strong link between the economy and the current turmoil inside Venezuela. Based on the scholarly article A Closer Look at Oil, Diamonds, and Civil War, natural resource production correlates strongly to the onset of conflict due to five causal mechanisms.  Two of these mechanisms explain the current situation in Venezuela. The first states that resource wealth increases the value of the state as a target. Due to Venezuela’s oil reserves, the state tends to accumulate most of the wealth in the country. Based on the mechanism, if the populous feels that the state is not distributing these rents fairly, there is an increased risk of civil turmoil. The second mechanism argues that resource wealth weakens the administrative power of the state. Because Venezuela relies heavily on oil exports, their revenue is not based on institutional taxation. Therefore, the Venezuelan government has no incentive to establish strong bureaucratic infrastructure to coerce the population in the form of taxation. Due to the lack of governmental coercion, civil unrest is projected to increase. Based on these mechanisms, political theory has suggested that Venezuela has a higher risk of internal conflict. Also important to note, in the article Buying Peace? Oil Wealth, Corruption and Civil War, 1985-99, Fjelde found a strong negative correlation between political corruption and civil war onset in oil rich states. Her findings conclude that political corruption is able to buy off certain strata in society to disincentivize them from rising up against the current leadership. This may explain why Venezuela has yet to experience civil war onset. Since the regime has invested heavily in acquiring the loyalty of the Military and the elites, political corruption has decreased the probability of civil war in the country.