Protests in France Unite Left and Right, Urban and Rural

French President Emanuel Macron’s decision to raise the gasoline tax to address environmental concerns ignited the largest protests France has seen in decades. People took to the streets, protesting lower living standards, inflation, and stagnating wages. With some early signs that the yellow vests movement is spreading across Europe, what are political pundits saying about the movement? What can political science teach us about violent mass-scale demonstrations?

Analysts and commentators on the left blame the protests on stagnating wages, massive income inequality, and a deteriorating standard of living. On the right, commentators point to high taxes, ill-advised attempts to create a green economy, and out of touch leaders. Yet the nature of the yellow vest movement is unique: although there are mixed messages that come from the protesters, the yellow vests movement actually joins the far ends of the political spectrum. We are witnessing what could be an emerging type of movement that unites rather than divides traditionally opposed groups, like the left-right and urban-rural cleavages in France. 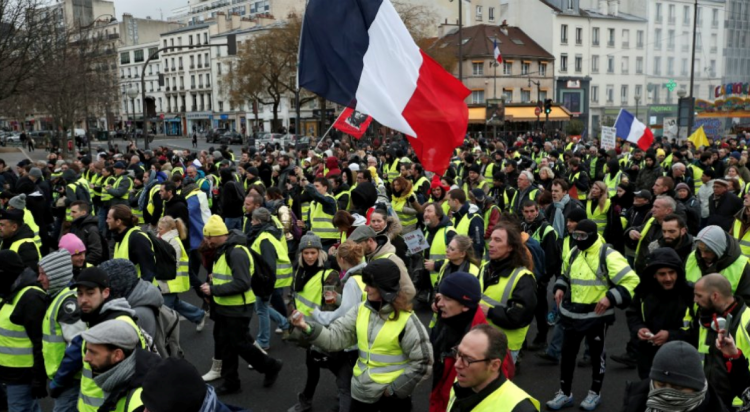 The yellow vests movement spread across France in November 2018, after accusations that the government-planned tax increases on fuel would disproportionately affect the poor and the middle class. The “gilets jaunes", French for yellow vests, emerged three months ago and shows no signs of losing momentum. Because the movement lacks a centralized leadership structure, it is difficult to estimate what exactly the yellow vests stand for. Yet, interviews with protestors in France reveal dismay with stagnating living standards, high rates of income inequality, and austerity measures that reduce social welfare spending. More broadly, the yellow vests capture an anti-EU, anti-establishment sentiment that has engulfed Europe in recent years.

What the Right is saying?

Conservatives in the United States argue that massive tax hikes on fuel and other consumption goods hurt the poorest, contributing to general outrage. The argument that high taxes are the underlying cause for the yellow vests movement has some validity: The French Government’s first move after the outbreak of violence was to cancel the planned tax increases on unleaded fuel and diesel.

The Right also points to the costs of creating a “green economy” on economic growth. For the right there is a tradeoff between protecting the environment through governmental policies, and maintaining economic growth. The situation in France merely reflects the inevitable contradiction between environmental sustainability and growth. Finally, as Auguste Meyrat at the Federalist points out, the French protests are not just outrage over high taxes, but also a symptom of “Dying France”. According to this view, the yellow vests demonstrate French dismay over the decline of traditional French culture, the inability of immigrants to assimilate, and the disconnect between the domestic needs of French citizens and the global policy focus of the French political elite.

What the Left is saying?

The Left, stresses the yellow vests’ support for higher wages, better pensions, and anti-austerity policies. There is some evidence that demands for higher wages generally, and an increase in the minimum wage in particular, have been an overarching theme of the movement. Alongside the fuel tax cuts, Macron announced €100 a month minimum wage increase and tax breaks for pension earners.

Additionally, some left-leaning analysts observe that the nature of the yellow vest movement underlines the decline of organized labor in France and elsewhere. They insist that labor unions as the backbone of workers’ rights provide for higher wages, stronger middle class and fair living conditions. Therefore, it is not surprising to see union leaders march alongside the yellow vests in an attempt to use the terrain set by the movement, and demand more rights for wage earners.

However divergent the demands of the yellow vests, the movement has managed to unite very different groups during the course of its existence. In its two months of existence, the movement brought together everything from the disgruntled rural protesters that decry their financial mishaps, to the diverse urban crowds angry at high youth unemployment and deteriorating public housing. As such, the yellow vests are defying long held notions in political science about urban-rural cleavages that have existed in France. In a 1971 study, Sidney Tarrow outlined some of the main reasons for the rural-urban divide in France, and found that French political participation had a distinct marker of urban partisanship and rural anti-partisanship. In turn, French politics has been marked by its centralized social and governmental institutions, and by political parties that favor urban models of representation. As pervasive as this divide has been, the last two months saw the long-standing urban-rural political divide in France unite in pursuit of a common set of interests. In December, farmers and union leaders joined forces and endorsed the yellow vests. Added to the movement’s propensity to generate support from the far-left and the far-right alike, the recent wave of civil unrest in France might be contributing to a new and unlikely emergent coalition-formation in French politics.