The Cost of Impasse: Examining the recent US government shutdown

During the recent government shutdown, 800,000 federal workers were unpaid, airport wait times increased (one airport cited a 3-hour wait for security), and federal district courts were struggling to operate. One of the most visible effects of the shutdown was its impact on national parks. Due to a pause in appropriations, the national park service had to furlough 80% of its workforce. As a result, numerous areas had reported indelible environmental damage caused by vandalism, litter, and the destruction of centuries-old trees, as seen in Joshua Tree National Park. Given the steep consequences a government shutdown poses for agencies, federal workers, and average citizens, Americans must grapple with the questions: what could make a shutdown worth it, and what mechanisms allow for shutdowns to occur in the first place? As this analysis will further discuss, the high cost of shutdowns may explain why politicians spend so much time discussing who is responsible for the shutdown in the first place.

This year’s budget is a political standoff between Congressional Republicans, who generally support President Trump’s $5.7 billion proposal to expand the US-Mexico border wall, and Democrats who vehemently oppose it. Last week, President Trump succumbed to a drop in approval ratings and reopened the government for three weeks. Although the government crisis has been temporarily addressed, the fundamental issues persist. A growing divide between Republican and Democratic support for the wall continues to threaten the stability of everyday government function. 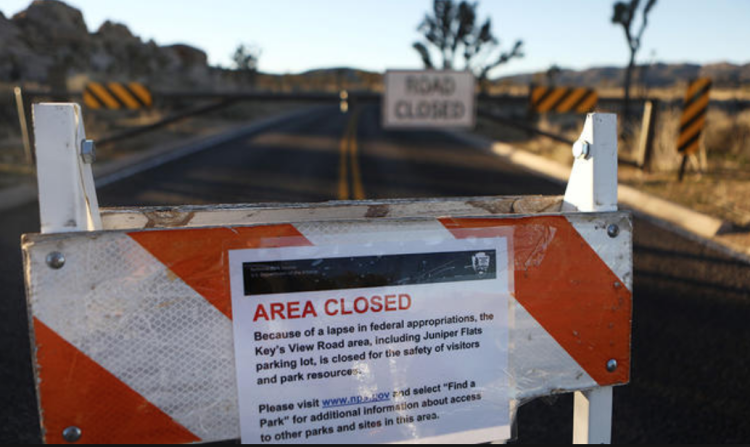 The government must stop spending money if there is no budget for expenditures. Therefore, government functions shut down after Congress and the President fail to pass an appropriations bill every year. In this shutdown, as in past cases, some services can stay open during a shutdown for a limited amount of time, in what is called a “partial shutdown.” President Trump’s decision to leave national parks open during a partial shutdown was unconventional. During the 2013 shutdown, President Obama ordered the closure of all national parks, only to receive backlash from local communities that generate $20 million of revenue from daily visitation fees in January. The difference in national park closures during shutdowns exemplifies the many highly politicized choices that must be made during shutdown, and the far-reaching effects of these decisions.

What is the Right saying?

With regard to the national parks, one conservative commentator criticized the Left for hyperbolizing the damage in national parks and noted that overflowing trash cans are not just a symptom of the shutdown; the National Park Service suffers a maintenance backlog of more than $11.6 billion. Prior to the shutdown, the legislature had invested little to address the backlog.

The Right takes a position not only on the effects of the shutdown, but on its causes, too.  In 2016, President Trump won the general election on a platform that promised strict immigration reform; most notably an expansion of the southern border wall. While the Left strongly opposed this proposition, the Right fervently supported it. According to one study, approximately 82% of Right-leaning voters endorse the wall and 54% support shutting down the government for it. Recently, Republicans argued the Left was responsible for not compromising, and are to blame for the government shutdown. They contend that Democrats in the House are holding up the process by refusing to pass a budget appropriating money for the wall. Moreover, the Right holds that that $5.7 billion for the wall is a meager portion of the U.S. budget. In fact, it amounts to only .34% of all U.S. discretionary spending. Therefore, the Right contends that Democrats are intentionally forcing a shutdown over what amounts to a low-budget ideological issue.

What is the Left saying?

Whereas Congressional Republicans are split in their support of the government shutdown, the Democrats are not. Since the 2016 election, left-leaning support for President Trump’s border wall has dwindled to a mere 6%. To Democrats, an expansion of the southern border wall would be a waste of resources in President Trump’s quest for political purpose. With Democratic constituent support so low, Congressional Democrats would not concede to fulfill President Trump’s campaign promises. Consequently, certain federal operations were halted for an unprecedented amount of time and the government remains open for a limited period.

Although left-leaning sources have expressed anger towards the destruction caused to national parks and other government functions during the shutdown, 69% think congressional Democrats should not accept funding for the wall in exchange for the government to reopen. This resistance demonstrates that despite outspoken sympathy from the Left, like Republicans, the government reopening was a far lesser priority than other political issues.

Government shutdowns have considerable political costs, and the national parks stand as just one example. Both historically and currently, American representatives on the Left and Right have denounced national park protection as a political priority. For every one of the thirty-five days the government was shut down, national parks lost around $400,000 in potential fee revenue. This totaled a $14 million loss on top of an $11.6 billion backlog on crucial maintenance repairs. At face value, the brief, three-week pause of the government shutdown is optimistic. However, the federal government’s shortcomings have inerasable ramifications on America’s prized national parks. Consider, though, that alongside damage to national parks, this shutdown has caused direct damage to federal workers’ financial stability, and federal programs that many Americans not only value, but would be afraid to live without. The national parks have shown up in the news as a visible example of the consequences of the shutdown, but the cost of a shutdown runs even deeper.

The cause of government shutdowns in the United States is rooted in polarized politics and a competitive system of checks and balances. Gridlock, in which the legislative and executive branch are stagnant when creating a bill, is a repercussion of a two-party, divided government that is unable to compromise. The federal government’s inability to efficiently execute legislation is the outcome of a government built upon mutually antagonistic institutions. In order for a budget to pass on time, these institutions (the House, Senate, and Executive branch) which are often run by competitive parties, must collectively agree. However, this has not happened on time since 1994. At face value, modern congressional dysfunction is vexatious and tiresome. However, the government’s inefficient structure is deliberate; an efficient government - one that can establish quick and sudden changes - poses a major threat to democracy. Hence, congressional dysfunction was a pioneering attempt by the Founding Fathers to uphold liberty and prevent tyranny.

When parties become more polarized, government inefficiency is amplified. As shown in the figure below, congressional moderation and gridlock have a consistent and inverse relationship. Now, with moderation at its lowest point in recent history, gridlock has spiked, with the recent bout of shutdowns over the last ten years standing as only one example of this gridlock. While correlation does not equal causation, as parties continue to polarize, it is more than likely the United States will experience a heightened frequency and duration of shutdowns. 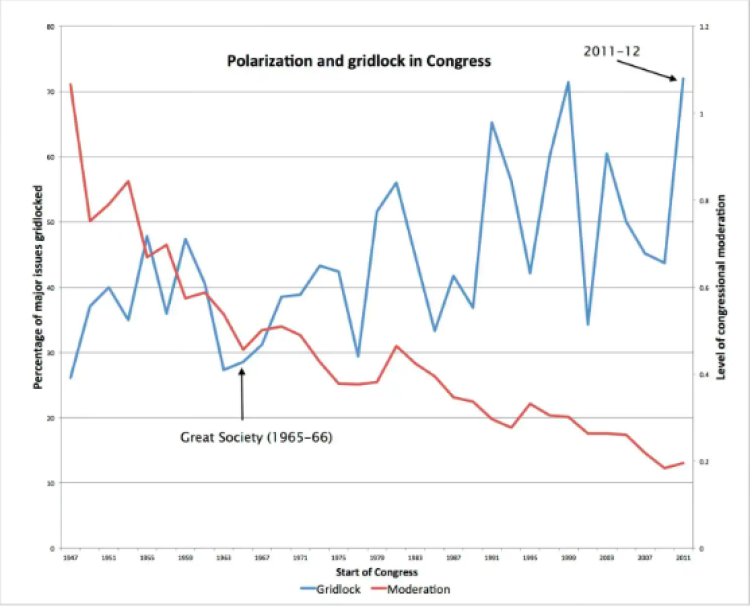