Nerd Night Boulder is a monthly event where graduate students and postdocs give short lay talks about their current research. It is a perfect event for anyone who wants to know what's happening in the Colorado science scene while having a lot of fun!!!

Local grad students and postdocs explain their science over drinks. Curious about what your friendly local scientists are up to? Come check us out!
#NerdNiteBoulder is here!!!
Monday, February 10, The Outback Saloon.
7pm free beer, 7:30pm talks start

Be there and be square! We'll be hosting talks on sex physiology, the brain's role in mating, and dating habits of prairie voles 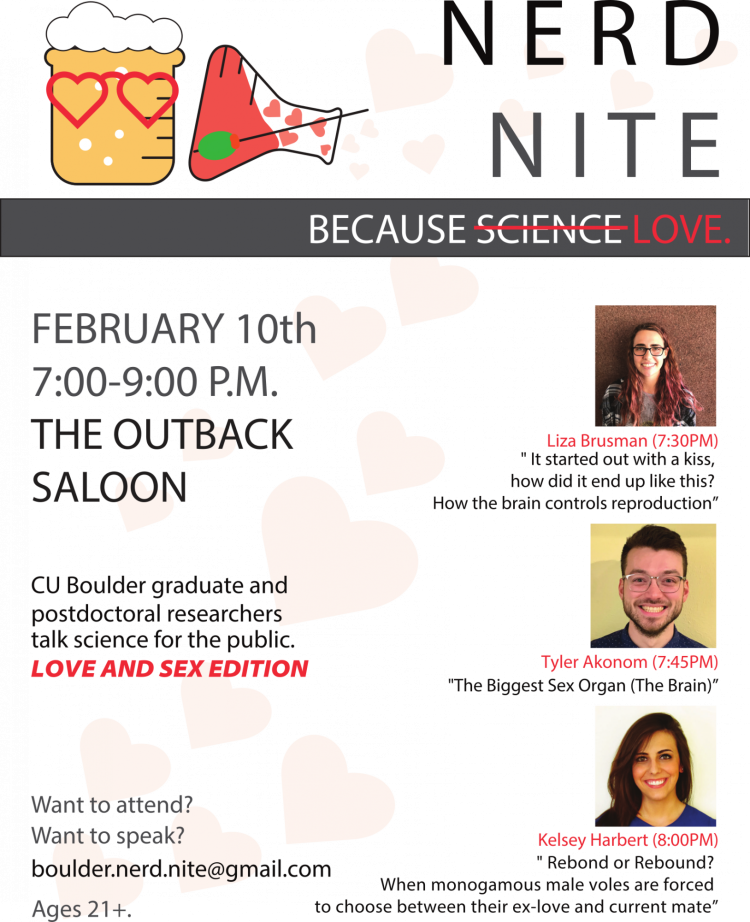 Liza Brusman
It started out with a kiss, how did it end up like this? How the brain controls reproduction

Kelsey Harbert
Rebond or Rebound? When monogamous male voles are forced to choose between their ex-love and current mate

Anna studied environmental science through her academic trajectory (B.A. Washington University in St. Louis, M.S. University of Alabama, Ph.D. Duke University). Anna is interested in the connections between upland, marine and human systems, and her current research investigates human migration along the coast and the historical loss of coastal ecosystems

Atma is a bioinformatics postdoc in the Chuong lab at CU Boulder. She studies ancient viruses: genetic parasites that invaded our ancestors millions of years ago and embedded themselves within our DNA. Her project focuses on determining how viral-derived sequences continue to affect us, by changing the expression of nearby genes and potentially causing diseases such as cancer. Prior to joining CU, Atma lived in Adelaide, Australia, where she completed a Bachelor in Applied Maths, PhD in Genetics, and one-year postdoc in Neuroscience at the Women’s and Children’s Hospital. In her spare time, Atma writes for Nature Careers and AustralAsian Science, and enjoys swimming and skiing.

Greg is a second-year PhD student in the Network and Security Systems Lab at CU Boulder.  He received his undergraduate degree from Santa Clara University in Electrical and Computer Engineering in 2016.  His research at CU is focused on developing systems that sit at the intersection of security and analytics on a cloud scale.

Stefano studied Physics as an undergrad and master student at the University of Bologna (Italy). Then PhD student at ETH Zurich (Switzerland), with a thesis on geomagnetism and the study of the Earth's outer core. Now he is a PostDoc at CU Boulder (in Physics), where he studies the deep fluid regions of planets in the Solar System. Climber, runner, traveler. Always love a pint of dark beer.

Roman studied a Bachelor's of Biochemistry at the University of Potsdam, Germany and then earned a fellowship to work in a lab in Salamanca, Spain.  After receiving a Master's of Biophysics from Humboldt-University in Berlin, he came to Boulder were he is earning a PhD in Biochemistry.

Bharat grew up amongst the quiet calm and serenity of New Delhi, India. Following an undergraduate degree in Chemistry, he packed his bags and headed for the lustrous world of western civilization. After spending several years seated in the lap of luxury only made possible by a graduate student salary he is now in Boulder, hoping for a better life. Today, he will talk to you about what he learned about a peculiar molecule in the atmosphere and its link with quantifying how much carbon plants take up during photosynthesis. This work was the focus of his PhD at Oregon State University, where he spent many years crying, screaming, panicking and wondering when he would see the sun again.