Building for Eternity: The Romans Conquer the Sea

Building for Eternity: The Romans Conquer the Sea

In this talk, Hohlfelder will explore the discovery of marine concrete by Roman builders, its use in antiquity, hypotheses regarding why and when it ceased being used, and the pioneering interdisciplinary research that led to the rediscovery of this transformative building material. More than two millennia ago, Roman builders discovered the most durable substance created by humankind – marine concrete. For at least 300 years, it was used to build and maintain a maritime infrastructure that was the nexus for the greatest empire the western world has ever known, an empire that in many respects provided a prototype for the European Union.

For reasons not yet clear, the recipe for making this long-lasting concrete was lost. After more than a decade of field and laboratory research, an interdisciplinary team of scholars that Hohfelder co-directed has only recently learned the secret of the durability of Roman marine concrete. Its survivability is astounding when compared to the expected life span of far less than a century for its modern counterpart, concrete made with Portland cement that can begin to deteriorate in the sea after only 10 years. Discovering why Roman marine concrete was so durable holds great promise for addressing some consequential problems facing our modern world (e.g. better seawalls to combat rising sea levels, a more permanent way to store toxic materials including nuclear waste, lowering carbon emissions, etc.). 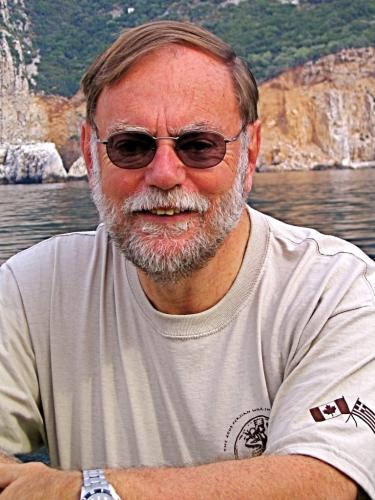 Bob Hohlfelder is a professor emeritus and former chair of the history department at the University of Colorado Boulder. His special research interests include ancient maritime history, the world of late antiquity and ancient numismatics. He has authored or edited nine books, more than 120 articles and 60+ reviews. He recently co-authored a book, Building for Eternity: The History and Technology of Roman Engineering in the Sea. He has presented more than 150 papers at professional conferences in 13 countries and given at least 325 public lectures at universities and museums around the world. Bob has been awarded 68 postdoctoral grants from such institutions as the National Endowment for the Humanities, the National Geographic Society, the American Philosophical Society, and the American Council of Learned Societies and has twice been a research fellow at Harvard University’s Center for Byzantine Studies at Dumbarton Oaks in Washington, D.C. He has been a visiting scholar at universities around the world.

In addition, Hohlfelder has participated in or directed 50 maritime archaeological expeditions in Italy, Greece, Spain, Portugal, Cyprus, Egypt, Israel and Turkey as well as in the deep waters of the Mediterranean. He also has served as a tour expert for the National Geographic Society, Lindblad Expeditions, the Smithsonian Institution and the Archaeological Institute of America throughout the Mediterranean world for 20 years. In the summer of 2011, he was a mission expert for UNESCO/ICOMOS and the World Heritage Committee for evaluating the Mexican nomination of Banco Chinchorro for listing as a World Heritage underwater site.

In 2016, he began a new career as managing director of the Planet Ocean Exploration Foundation, an international philanthropic organization dedicated to enhancing our understanding of the world’s oceans and environment and to sustaining the viability of our planet.

CU on the Weekend Lectures Fall 2018

Bernstein as Teacher: Exploring the Language of Music
Sept. 8, 1–3 p.m.