Dispatches from Paris: Galápagos vs. the greatest ocean current in the world

Home Projects Ocean Circulation Dispatches from Paris: Galápagos vs. the greatest ocean current in the world

What happens when a tiny little group of islands rises from the sea floor and stands directly in the path of one of the grandest ocean currents in the world? This happened millions of years ago; we now have penguins in the tropics and Darwin got to thinking about life. But how far afield do the effects reverberate through the climate system?

This is an old question that I am working on with new friends (and new tools) while on sabbatical at the Institut Pierre Simon Laplace (IPSL), Université Pierre et Marie Curie (UPMC) in Paris, thanks to generous support from the Alfred P. Sloan Foundation. Stay tuned for more.

A little background: What’s so special about the Galápagos?

There is far more than one could learn in a lifetime about geology, ecology, biology, and evolution from the Galápagos Archipelago, and part of why this is so is because of where it is on the planet. In fact, it is precisely where the islands just happened to have formed that makes them so fascinating to me—a physical oceanographer and climate dynamicist.

Imagine that you could fly high above the Earth and see beneath the surface of the ocean. Unlike birds, who can merely spot schools of fish skimming along the surface, your vision can pierce miles deep within the ocean, revealing highways of currents in every direction—sometimes even stacked on top of one other. If you gazed into the vast and deep Pacific Ocean near the equator, you would immediately notice the Equatorial Undercurrent flowing eastward some 8,000 miles all the way from Papua New Guinea toward South America (about a third of the way around the planet). The ‘Undercurrent’ is one of the most coherent, voluminous, and swiftest ocean currents in the world. A top speed of a little over 3 mph is just a casual walking pace, but multiply by the width and height of the Undercurrent and you discover that about 10 billion gallons of seawater are moving by every second. Quite appropriately, the Undercurrent was discovered on accident in the early 1950s, when long-line fishermen noticed their gear “drifting” eastward beneath their boat—the opposite direction as the wind and surface current. Now we know it to be a fundamentally important part of the circuitry that is the global ocean circulation.

The Galápagos formed on the equator some millions of years ago in the eastern Pacific. Not exactly on the equator, though. The largest island (Isabela) extends from about 1.1°S to 0.2°N. Purely by coincidence, Isla Isabela literally forms a wall in the ocean that happens to be about the size and location of the Undercurrent. The Undercurrent has difficulty flowing past this wall because the rotation of the Earth keeps it virtually “stuck” to the equator—and the Galápagos is just wide enough. As one might imagine, as the island tries to bring the current to an abrupt halt, some of the water probably manages to sneak around the islands, while some goes up and down. The water that goes up is the reason the surface is so cold and productive to the west of the Galápagos, where you'll find almost all of the penguins and fur seals in the entire archipelago.

My own adventures in the Galápagos Islands began as a graduate student, when I accidentally (re-) discovered them myself. In a moment of oblivious luck, I added the Galápagos to a computer model of the Pacific Ocean and found rather surprising and dramatic effects on the ocean far beyond the local ups, downs, and arounds of the water near the Galápagos (Karnauskas et al. 2007, 2008). The most amazing thing to me is still the coincidence of the islands; had they formed a degree north or south of where they did, none of this would matter. The Galápagos would not stand in the way of the Undercurrent; consequently, the local oceanographic conditions (and the ecology that depends on them) would be fundamentally different, and who knows what else. (“Who knows what else” is the very question that brings me to Paris—more below.)

Since running those model simulations in grad school, I have made some attempts to study the problem using real world observations (Karnauskas et al. 2010, 2014). Indeed, the richness of the physical processes at play make it a unique “natural laboratory” to study the interaction of the ocean, atmosphere, and land—and this deserves more than one approach. Direct observations in this context prove very challenging, in part because of the remoteness of the Galápagos. For decades, there has been an array of moorings in the tropical Pacific Ocean continuously making wonderfully useful measurements. Unfortunately, the coverage area of this array stops just short of the Galápagos. In general, we can use satellites orbiting the Earth to investigate remote parts of the planet, but satellites are largely unable to see beyond the surface of the ocean (like the birds). Studying the physics of what goes on beneath the sea truly requires making actual measurements in the harsh underwater environment whenever and wherever possible, and computer models can help fill in the gaps. Our most recent effort is to employ autonomous underwater gliders to measure the currents flowing near the Galápagos, along with their characteristics such as temperature and salinity, and preliminary results absolutely confirm that the Galápagos is capable of stopping the EUC dead in its tracks, just like in my model simulations. (Imagine the facepalm...)

I have always hypothesized (and dreamt) about what effect this little tussle between a colossal ocean current and an island that happens to be just big enough has on the climate system at a global scale. It is clear enough that the blockage of the Undercurrent leads to some local upwelling, which makes penguins and fur seals happy. What would lead one to think there’s any more to it than that? Every climate dynamicist knows that the global atmosphere is very sensitive to the condition of the tropical ocean. The analogy isn’t perfect, but think about a pebble dropped into a placid pond. Little changes in the temperature of the ocean here and there in the tropics are like pebbles to the atmosphere, and the effects ripple around the world in the form of atmospheric waves. If you live in Sahel Africa, is your monsoon climate just a little different because of some tiny islands thousands of miles away? What other unintended errors are contained in global climate models that do not include the Galápagos Islands simply because they do not quite fit into the grid? The notions of chaos (the “butterfly effect”), or interconnectedness for that matter, are not new, but I find the simple idea that the Galápagos of all places might be one of the planet’s most powerful butterflies just beautiful if not quixotic considering how the Galápagos served as inspiration for the development of early ideas on evolution.

It was relatively easy to use a computer model of just the ocean to ask “how is the tropical ocean different because of the Galápagos?” On the other hand, asking “how is the whole planet’s climate (ocean and atmosphere) different because of the Galápagos” requires a modeling system that is an order of magnitude more scientifically complex and computationally intensive. Luckily, my good French colleagues may have just the tool, expertise, and mutual interests to help me ask this profound question in a more rigorous way than dreaming. Stay tuned for progress. 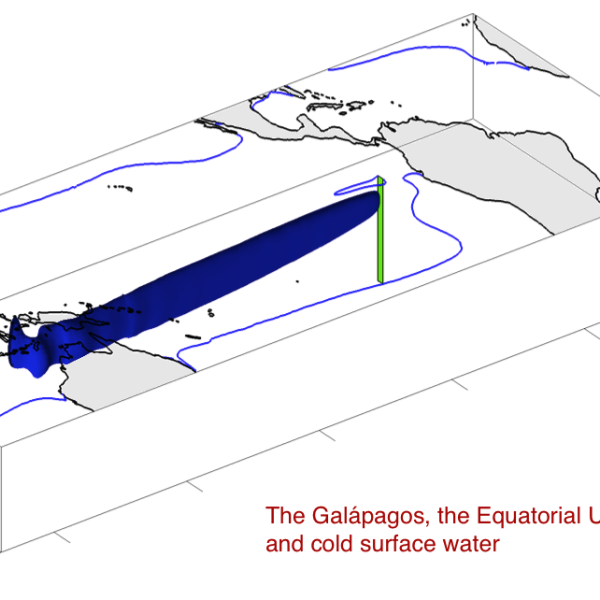 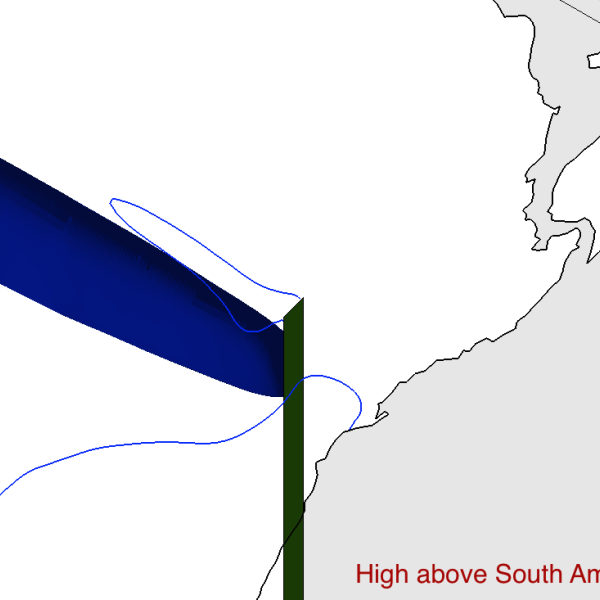 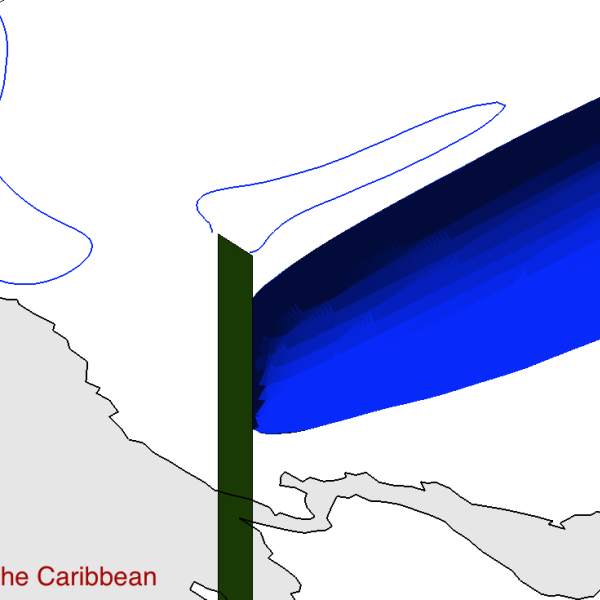 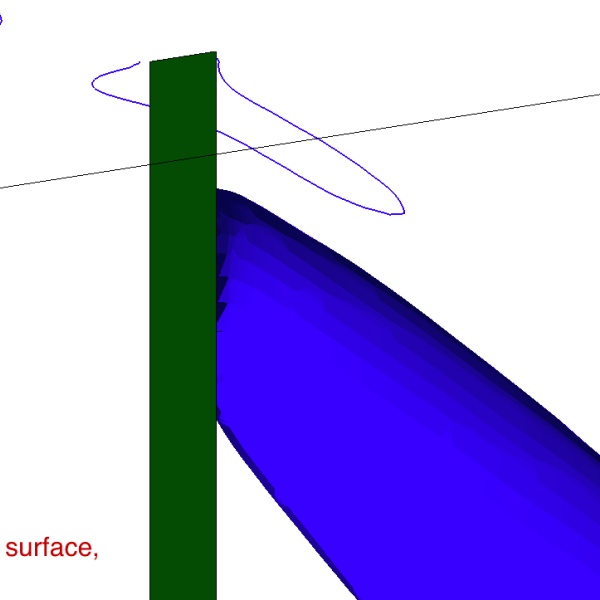