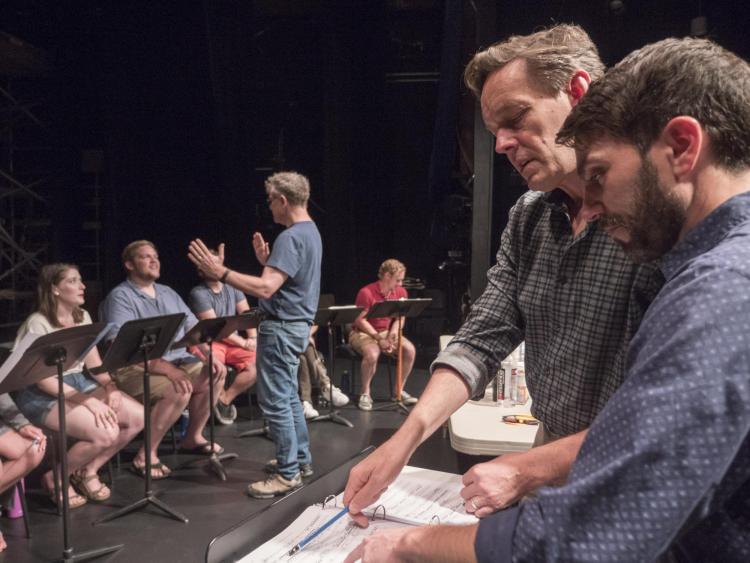 Hailed by the American Academy of Art & Letters for music of “inexhaustible imagination, wit, expressive range and originality,” composer Tom Cipullo is the recipient of a Guggenheim Fellowship, the Arts & Letters Award from the American Academy of Arts & Letters, the Pellicciotti Opera Composition Prize and the 2016 Argento Chamber Opera Composition Award (for “After Life”). He has received commissions from dozens of performing ensembles, as well as fellowships from Yaddo, the MacDowell Colony, the Liguria Center (Italy) and the Fundacion Valparaiso (Spain). The New York Times has called his music “intriguing and unconventional” and The Pittsburgh Post-Gazette has called him “an expert in writing for the voice.” Cipullo’s music is recorded on the Naxos, Albany, CRI, PGM, MSR, Centaur and Capstone labels, and is published by E.C. Schirmer, Oxford University Press and Classical Vocal Reprints. Cipullo’s critically-acclaimed opera, “Glory Denied” is one of the most frequently performed 21st-century operas.

Scheer’s work is noted for its scope and versatility. With the composer Jake Heggie, he has collaborated on many projects, including the critically acclaimed 2010 Dallas Opera world premiere, "Moby-Dick," starring Ben Heppner as Captain Ahab; "Three Decembers" (Houston Grand Opera), which starred Frederica von Stade; and the lyric drama "To Hell and Back" (Philharmonia Baroque Orchestra), which featured Patti LuPone. Other works by Scheer and Heggie include "Camille Claudel: Into the fire," a song cycle premiered by Joyce di Donato and the Alexander String Quartet.

Scheer worked as librettist with Tobias Picker on "An American Tragedy," which premiered at the Metropolitan Opera in 2005. Their first opera, "Thérèse Raquin," written for the Dallas Opera in 2001, was cited by Opera News as one of the ten best recordings of 2002. Other collaborations include the lyrics for Wynton Marsalis’s "It Never Goes Away," featured in Marsalis’s work "Congo Square." With the composer Steven Stucky, Scheer wrote the oratorio "August 4, 1964," for the Dallas Symphony Orchestra, which was nominated for a Grammy and performed at Carnegie Hall.

At the Dallas Opera earlier this year, Scheer collaborated with Joby Talbot on the opera "Everest," based on interviews from survivors of the 1996 Everest expedition. "Cold Mountain," Scheer’s most recent work with the composer Jennifer Higdon, premiered this summer at the Santa Fe Opera. It opened on the east coast in early 2016 at the Academy of Music in Philadelphia.

Scheer recentlyl worked with Jake Heggie on an operatic adaptation of "It’s a Wonderful Life" for the Houston Grand Opera in December 2016. Also a composer in his own right, Scheer has written a number of songs for singers such as Renée Fleming, Sylvia McNair, Stephanie Blythe, Jennifer Larmore, Denyce Graves and Nathan Gunn. The distinguished documentary filmmaker Ken Burns prominently featured Scheer’s song “American Anthem” (as sung by Norah Jones) in his Emmy Award-winning World War II documentary for PBS titled "The War."