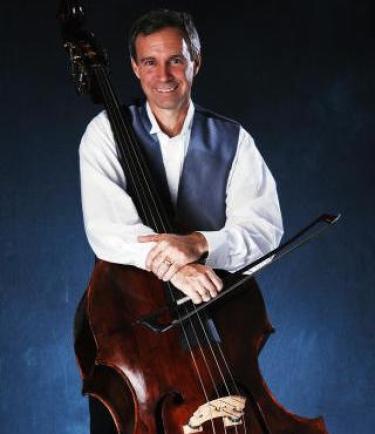 The double bass has been called a noble instrument because of the way it provides the harmonic and rhythmic foundation for symphony orchestras, classical chamber music, jazz, rock, bluegrass and so many other forms of music. As a solo instrument, the double bass is stepping out increasingly into the spotlight with its capability for virtuosic technical brilliance and deep expressiveness that matches the human voice. The expanding world of music presents an array of musical possibilities for double bass players. Paul Erhard enjoys a career full of musical variety: He performs as a soloist, orchestral bassist, chamber musician, jazz bassist and an innovator in the improvised music of India, and explores improvisation with a diverse variety of artists. Erhard’s musical versatility is reflected in his teaching style. As a teacher, Erhard is committed to providing each of his double bass students with a well-rounded set of highly developed musical skills and focused awareness. His goal is to instill in his students the mastery and self-confidence to take advantage of whatever musical doors open in their careers as professional musicians.

Paul Erhard performs and teaches throughout the U.S., as well as internationally in Europe and Asia. His playing and teaching are a synthesis of American and European styles, combined with elements of music from India. Through his own education in the U.S. and Germany, and his annual guest artist/research trips to Europe from 1998-2010 (Hungary, Czech Republic, Slovakia, Germany, France, Italy, Spain), Erhard draws upon elements he has learned from a wide array of double bass artists. As a guest artist, he has participated in BASS 2008 in Paris and BASS 2010 in Berlin; International Society of Bassists conventions, numerous double bass festivals in Germany, Hungary and Czech Republic; at American String Teachers Association (ASTA) Conferences; and at the annual Colorado Music Educators Association conferences. Erhard has served as a jury member alongside many of the world’s most eminent double bassists for major solo competitions in the U.S., Europe and South America, including the first, second and fourth Johann-Matthias-Sperger Solo Competition in Germany, the 2017 and 2011 International Double Bass Solo Competition in Markneukirchen, Germany, and the International Society of Bassists Senior Solo Division in 2011. Erhard has given master classes at Cincinnati College-Conservatory of Music, Cleveland Institute of Music, Indiana University, Interlochen Arts Academy, Juilliard, Manhattan School of Music and Peabody Conservatory.

Paul Erhard’s solo recitals blend traditional and contemporary double bass solo repertoire (he loves Bottesini), combined with improvisations on ragas from India. As a concerto soloist, Erhard has performed the Bottesini, Dittersdorf, Dragonetti, Koussevitsky, Mortari and Rota double bass concertos with orchestras in Washington, Colorado, New York, Kansas and Hawaii. His most recent performances of the Nino Rota Divertimento Concertante double bass concerto during the 2015-2017 seasons include appearances with the Bellingham Symphony in Washington and the Longmont Symphony, Grand Junction Symphony and Boulder Symphony Orchestras in Colorado. Erhard performed the Virgil Mortari Double Bass Concerto at Lincoln Center in New York City with conductor Isaah Jackson as the winner of the 1984 Juilliard Double Bass Concerto Competition. Frequent chamber music collaborations with a wide variety of performers have included the Dvořák Quintet and Schubert Trout Quintet with the Grammy-winning Takács Quartet. Active as an orchestral musician, Erhard is principal double bass of the ProMusica Colorado Chamber Orchestra and the Boulder Bach Festival. Prior to moving to Colorado from New York City, Erhard was principal bass of the Soviet Émigré Orchestra, the Albany Symphony and Queens Philharmonic in New York, and before that assistant principal bass of the Kalamazoo Symphony. Erhard’s roots as a jazz bassist began in high school with the Larry King Trio in New York, where he received foundational training in classical and jazz bass with jazz bassist Dr. Lyn Christie. Living for two years in Germany, Erhard was the bassist in the EMPS Jazz Trio in Munich. Back in the U.S., he was the bassist in the Eastman Jazz Ensemble 1 conducted by Rayburn Wright, the Ken Morgan Jazz Unit in Kalamazoo and the University of Colorado Faculty Jazz Quintet.

The music of India has fascinated Paul Erhard since he first encountered it in 1998. Since that time, he has pioneered playing Indian classical music to create new performance opportunities for the double bass. Erhard has studied privately with a number of Indian musicians in India and Colorado. In addition, he has been the recipient of two prestigious research grants to study in India. The first was a “Senior Performing Arts Fellowship” grant from the American Institute of Indian Studies (AIIS) in 2001, where he studied South Indian (Karnatic) classical singing for six months. In 2013 and 2014, Erhard was a Fulbright Scholar in India researching his project "Training the Musical Mind" interviews with 35 prominent Indian musicians exploring how Indian performers/teachers use the Tambura drone to develop skill in singing/playing in tune.

To complement his performance activities as a classical and jazz bassist, Erhard performs in two ensembles he formed that fuse Western and Indian music. Sands Around Infinity, with double bass, cello, voice, harmonium and Indian percussion, is an “Indo-Western fusion with a twist of jazz” trio that performs its original arrangements of traditional Indian bhajan songs combined with elements of Western classical music, jazz and improvisation. Sands Around Infinity has performed close to 50 concerts in the U.S., Germany and India. Sands Around Infinity’s debut CD "Of Infinite Light" was released in June 2015. Atmic Vision blends the soulful double bass with the enchanting Indian bansuri flute and mesmerizing tabla drums. The Atmic Vision’s first CD "Expanding Horizons" was released in 2005.

Paul Erhard’s primary double bass teachers are Homer Mensch, James VanDemark, Marshall “Larry” Hutchinson, Georg Hörtnagel, Franz Ortner and jazz bassist Dr. Lyn Christie. Erhard earned his master's and doctorate degrees from The Juilliard School and his undergraduate degree from Eastman School of Music. Prior to Eastman, he studied for two years at the Hochschule für Musik in Munich. He has participated in the Aspen Music Festival, Colorado Music Festival, Grand Teton Music Festival and Yale Summer Festival, and spent three summers at the Pierre Monteux School for Conductors as a student of Maestro Charles Bruck.