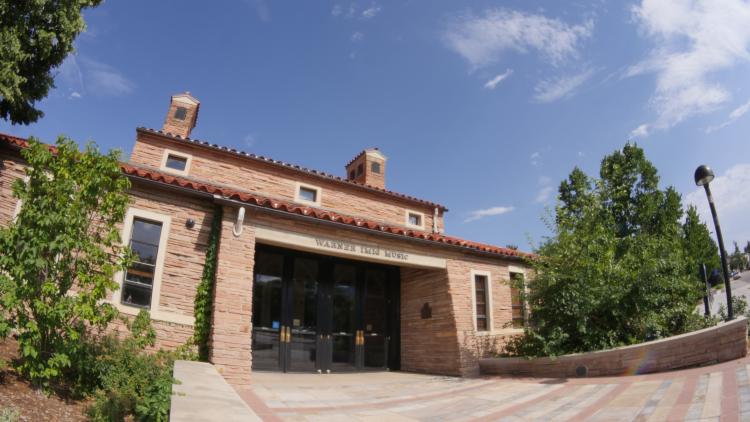 The University of Colorado Boulder on Friday announced preliminary plans for an expansion of the Warner Imig Music Building that would provide new state-of-the-art rehearsal spaces, allow the College of Music to consolidate nearly all of its operations into one location on campus and set the stage for innovative program growth.

CU Boulder will release a request for qualifications for architectural services next week, with the project targeted for a summer 2020 completion date that coincides with the College of Music’s 100th anniversary.

The Imig addition would be attached to the south wing of the building. The project includes removing about 12,000 gross square feet (9,000 assignable) of the current building and constructing 50,000 gross square feet (33,000 assignable) of new building space in its place. The initial estimated project cost is $42 million and would be funded by the CU Boulder campus pending Board of Regents approval of the project next year.

The Imig proposal comes in the wake of the College of Music’s announcement earlier this year of its music+ fundraising campaign. That initiative aims to raise $50 million, including at least $25 million in new endowments, to help the college strengthen its position as a leader among higher education music institutions.

"We’ve already seen remarkable participation in the music+ campaign from a generous group of donors who are interested in seeing the College of Music’s strategic vision become reality," College of Music Dean Robert Shay said. "I think we really expect that this addition will open the floodgates of energy for us and allow us to imagine an even bigger and bolder future with these additional spaces."

The new addition will allow for the College of Music’s choral, jazz and world music programs to relocate from Macky Auditorium, where their rehearsal spaces have become too small and face acoustical challenges. The relocation, which also includes much of the music education program, will help streamline collaborations among faculty and different departments within the College of Music by placing them in the same building.

New elements planned as part of the addition include a 3,000-square-foot band and orchestra rehearsal room, as well as new rehearsal halls for the choral and jazz programs. There will also be new faculty studio offices, new staff and student offices and support spaces, new classrooms and practice rooms, and a new musician’s wellness center that will focus on enhancing students’ physical and mental health.

Demolished program spaces that will be replaced will likely include a 120-seat recital hall, a 40-seat music education classroom, percussion studio and practice rooms and administrative offices and the dean’s suite. The project would also include creating a new main entrance for the building.

Provost Russ Moore stated, "I could not be more excited for the 100th anniversary of the College of Music and am very pleased to be able to be part of announcing the addition to Imig. This new space, along with the dedication of our top-quality faculty, students and staff will ensure the College of Music at CU Boulder remains one of the preeminent places in the country to study, research and work."

Next week’s request for qualifications covers architectural services that would see the project through program development, concept design and schematic design. Pending Regent approval, construction would start in February 2019, with plans to have the addition completed and ready for the fall 2020 semester.

"As we begin to dive into a long-term visioning process for the CU Boulder campus, the proposed Imig addition is a shining example of the holistic approach being taken to space management, where multiple avenues are explored to determine which one not only best meets program needs in a cost-efficient manner but which also best aligns with a university-first mindset toward overall space needs on campus," Vice Chancellor for Infrastructure and Safety David Kang said.

The Imig addition will not only ease space limitations experienced by the College of Music and help current programming continue to thrive, but it will also open the door to several new opportunities. Shay said programs that combine music with media and technology studies, as well as collaborations linking music with disciplines like business, engineering and law are all within the realm of possibilities for future growth.

Shay added that the new building will also enhance the College of Music’s ability to meet demand from non-music majors for increased class offerings and lessons, as well as provide potential opportunities for K-12 programming.

"Our students, faculty and staff have been great at establishing the College of Music as a leader and continue to bring excitement to their work" Shay said. "I think anticipation of the possibilities that lie ahead with these new facilities will only amplify their efforts."

Olivia Huizar Conner shares how her background inspires her to promote Diversity, Equity and Inclusion (DEI) in music. END_OF_DOCUMENT_TOKEN_TO_BE_REPLACED

Alumna Annie Booth shares how the College of Music continues to impact her career as an award-winning jazz pianist, band leader, composer/arranger and educator—and offers valuable career advice. END_OF_DOCUMENT_TOKEN_TO_BE_REPLACED
Return to the top of the page