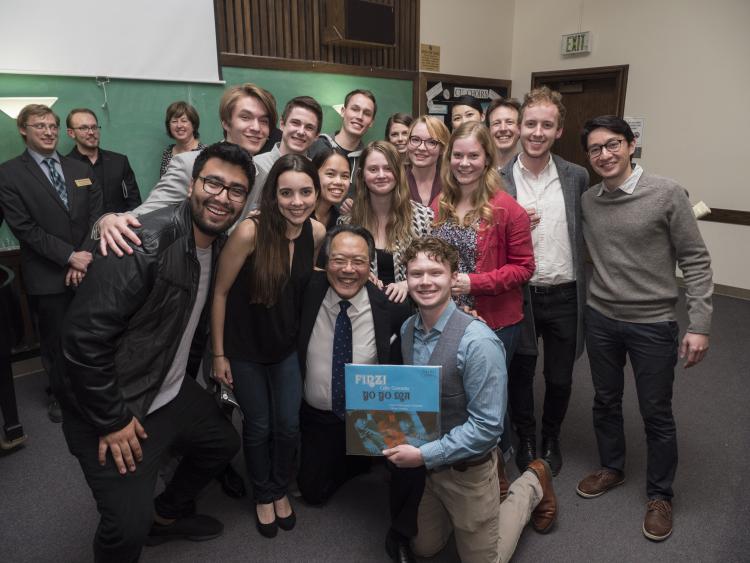 Members of the CU cello studio pose for a photo with the greatest living cellist of our time, Yo-Yo Ma. Photo courtesy Glenn Asakawa

Every year, the CU Presents Artist Series brings newcomers and household names in the world of music and dance to CU Boulder. Each artist’s unique presence fills the picturesque auditorium at Macky and transforms campus for a couple of days, bringing the energy of Lincoln Center or Broadway to the foot of the Flatirons.

As the Boulder community benefits from the opportunity to witness remarkable singers, instrumentalists and dance troupes live, students at the College of Music and the Department of Theatre and Dance enjoy the once-in-a-lifetime experience of seeing, learning from—even talking shop with—their idols.

On the heels of an 80th season that saw appearances by the likes of Yo-Yo Ma, James Galway, Deborah Voigt and Richard Goode, CU Presents Executive Director and Artist Series curator Joan McLean Braun says the lineup for 2017-18 has something for every music lover.

“They’re artists who touch people’s lives, who will make people thrilled that they came and get them thinking about the performance after they leave. To me, they’re all interesting and inspiring.”

The season begins with the yet-to-be-named winner of the Van Cliburn International Piano Competition, rings in the holidays with jazz and R&B vocalist Dianne Reeves, breaks up the midwinter doldrums with a rollicking concert by banjoist Béla Fleck and string quartet Brooklyn Rider and a return performance by American violinist Joshua Bell, welcomes the spring thaw with “cantina classical” singer Lila Downs, and closes with a virtuosic celebration of 17th-century Italian music by Quicksilver Baroque Ensemble.

Braun says while each artist brings something different for audiences to sink their teeth into, they also bring new opportunities for students to learn from the best.

“As I look for artists, one of the things I do is reach out to faculty to see if they would like to work with that person, if that would be valuable. Knowing an artist is a great teacher or enjoys interacting with our students is definitely a factor.”

The attention to student experience isn’t lost on the students themselves. Junior cellist Haley Slaugh was one of the lucky members of her studio to attend an intimate reception with Yo-Yo Ma after his captivating solo recital in February. Among other things, she and her colleagues talked to Ma about the importance of keeping your cool during a performance.

“He told us that when he performed the fifth Bach suite that night, he had a memory lapse during the first movement and got lost for about 10 seconds,” Slaugh explains. “But he kept going. He said that it’s OK if you mess up, because it’s the music that counts. You can’t freak out. It’s what you do with the music.

“He is this legendary musician, and I’ve always looked up to him … and there I was that night, standing next to him. It’s important as a musician to meet your hero and realize that he’s human too. He was where you are years ago, and it is possible to get to his level.”

Braun was a bit star-struck herself that night.

“It was kind of a dream to be able to present him,” she says. “Yo-Yo Ma has artistry and soul, and he’s interested in other people. He’s truly a musical genius and incredibly intelligent, but he’s also focused on other people and learning new things.” 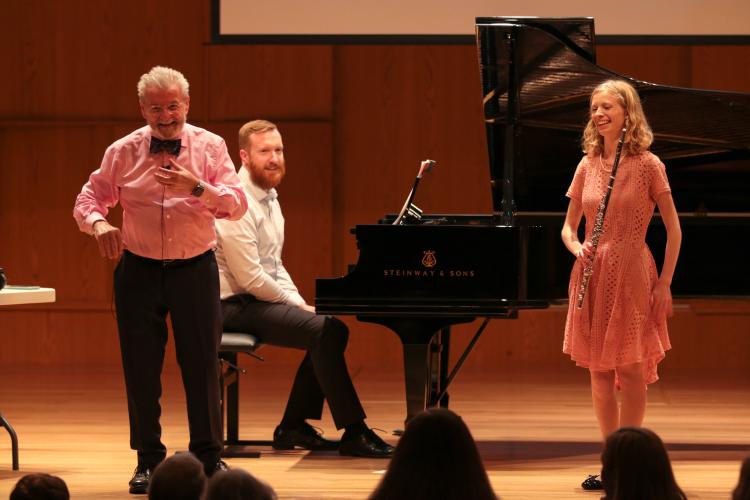 James Galway presents a master class during the Once a Flutist festival. Photo courtesy Emma Salvati

Flutists also enjoyed a visit from the rock star of their order this year as Sir James Galway and Lady Jeanne Galway took the stage in March. Associate Professor of Flute Christina Jennings, who performed along with the flute studio on stage with Sir James, says collaborating with such a legend brought out the doting fan in her just as much as it did her students.

“I used to play along with his Mozart concerto recordings when I was a kid. He really expanded the realm of possibility of what it meant to be a flutist and upped the ante of what a solo flute career could look like. Those recordings were part of what inspired me and so many people to play the flute.”

The Galways’ performance even inspired Jennings to plan a two-day celebration of the flute community called the Once a Flutist festival, which brought together students, alumni and even young flute players from around the area.

Braun says that opportunity to introduce children to these artists is another service the Artist Series provides.

“Look at the Nile Project, for example. They put on an outreach performance at University Hill Elementary [across Broadway] that exposed this younger generation to the issue of water use and conservation. That we can have that kind of an impact is wonderful.”

Braun says the reason the Artist Series is able to provide these outstanding opportunities is the continued power of live music to bring people together.

“After Yo-Yo Ma, I heard from a surprising number of people who were moved to tears during that performance. The soul-bearing nature of it is something that you can’t experience watching on TV in your living room. We all had that experience together, and that’s special.”

For more information on the 2017-18 Artist Series and to book season tickets, visit the CU Presents website.

Curiosity drives Lydia Wagenknecht, a PhD candidate in ethnomusicology and recent recipient of a Fulbright Research Award. “I care that my research will help us understand something in a more broad-based way that we didn’t understand before,” she says. END_OF_DOCUMENT_TOKEN_TO_BE_REPLACED

We’re so excited to welcome alumnus Damani Phillips back to campus this week and to present him the College of Music’s 2022 Distinguished Alumnus Award at our commencement ceremony on May 5! “The versatile training provided by CU has been the cornerstone of my success to date, and has enabled me to do and be many things well beyond typical expectations,” he says. Meet Phillips and discover his powerful advice to graduating Music Buffs. END_OF_DOCUMENT_TOKEN_TO_BE_REPLACED

On May 5, we look forward to welcoming back Judith Glyde, formerly professor of cello and chamber music at the College of Music and chair of our string faculty. Since retiring in 2014 to live in New York City, the professor emerita she has been active with the college’s alumni community there, offering tremendous support to Forever Buffs who are now living and working in the city. END_OF_DOCUMENT_TOKEN_TO_BE_REPLACED
Return to the top of the page