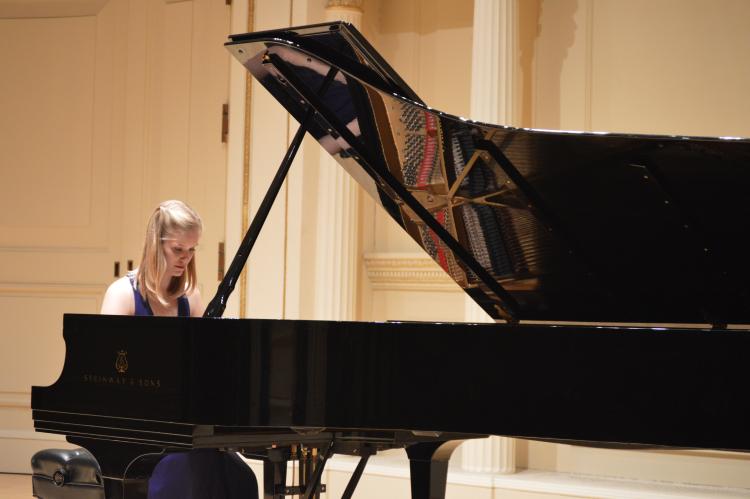 No one knows better than Grace Burns just what a difference a vision and a financial boost can mean to a young musician and college student.

Burns was one of 14 students from the University of Colorado Boulder College of Music to perform in a showcase concert at Carnegie Hall’s Weill Recital Hall in November.

“It was an amazing experience to look out from the stage and see my family, professors, college alumni—in a packed hall,” said Burns, who is a piano master’s student. “I’m so grateful for the opportunity.”

In support of opportunities like this, and in celebration of its approaching centennial in 2020, the college is embarking on its first major fundraising campaign.

The “music+” campaign is tied to a dynamic new outlook for music at CU Boulder called “The College of Music Advantage.” The wide-reaching, 10-year strategic plan was set in motion by the priorities of students, faculty, staff and other members of the college community. It emphasizes cross-campus partnerships, an expansion of alumni resources and services, and more professional performance opportunities like Carnegie Hall.

A cornerstone of music+ is the launch of an ambitious effort to raise $50 million. Currently, the college is nearly halfway to reaching that goal, including major gifts totaling $4 million that led to the naming of the Eklund Opera Program and the Ritter Family Classical Guitar Program.

“It’s encouraging to see the college take its national and international reputation to the next level,” said Chancellor Philip P. DiStefano. “Music will play a big role as the campus takes its place as a leading innovation university with a positive impact on our world.”

DiStefano said the College of Music’s campaign sets an example for future collaborative fundraising efforts in other colleges, schools and programs on campus.

Dean Robert Shay said the music+ campaign both reflects the aspirations of the college to strengthen its position as a leader among higher education music institutions and celebrates 100 years of musical excellence and innovation at CU Boulder.

“It’s this idea that we will take our core activities, which are already terrific, and add amazing new layers of professional experiences, interdisciplinary partnerships and leadership opportunities,” Shay said.

The future of music at CU Boulder

The tagline of the campaign is “The future of music, a century in the making.” While laying the groundwork for the next 100 years of music at CU Boulder, it celebrates the college’s first 100 years of achievement:

Becky Roser, a longtime supporter of the College of Music and namesake, along with her late husband Jim, of the Roser Visiting Artists Program and Roser ATLAS Building on the CU Boulder campus, is chairing the music+ campaign. She said the college’s bold plans for the future call for an equally bold effort to make them a reality.

“What makes this different is that it’s an opportunity to build on an already successful foundation and do things in new, creative ways,” Roser said. “It’s the right timing. Things have coalesced nicely to allow for this breakthrough moment. It’s time for the college to strut its stuff.”

Shay said spirit of collaboration among students, faculty, alumni and community members is a big part of what makes music+ compelling.

“Everyone within our community, including students, faculty, staff and supporters, recognizes and relishes how vibrant and collaborative the environment is at the College of Music,” Shay said. “Those internal values give us confidence as we take this message outward, especially when reconnecting with alumni.”

For students like Burns, the strategic vision—coupled with community support—will set the College of Music apart and lead to even more impressive outcomes for students, alumni and faculty.

The piano master’s student and her peers couldn’t have made the trip to New York to perform in the iconic, career-launching Carnegie Hall without the generosity of the College of Music’s donors. The opportunity was made possible with gift funds dedicated to student travel provided by donors such as Don and Maria Johnson, Dan and Boyce Sher and Becky Roser.

“It was so valuable for all of us to have that real-world experience outside of our normal comfort zone. To go from navigating New York City to dress rehearsal to successful concert in one day was a great way for us to be exposed to the life of a concert musician.”

For more information on how to support and get involved in music+, visit the music+ page.

As we celebrate National Hispanic Heritage Month, we're inspired by the resilience and determination of DMA student Pablo Beltran. END_OF_DOCUMENT_TOKEN_TO_BE_REPLACED

We’re thrilled to introduce Raven Dow-Hygelund and Anna Kallinikos as the most recent recipients of the College of Music’s Sher Distinguished Musician Scholarship. END_OF_DOCUMENT_TOKEN_TO_BE_REPLACED
Return to the top of the page