Home About History of the University Libraries

History of the University Libraries 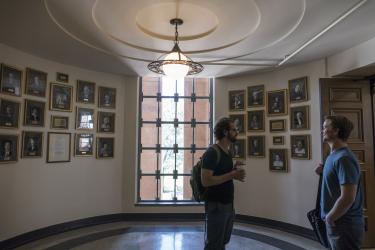 The growth of the University Libraries parallels that of the University of Colorado. The library began modestly with a single room in Old Main in September 1877. The collection included two books written and donated by ex-Governor William Gilpin and a few bags of U.S. government documents from Washington, D.C., donated by Senator Henry M. Teller. That first room in old Main was named the Teller Library.

A few months after the opening of the University and the library, Charles Buckingham gave $2,000 for the purchase of books. In December 1877, President Sewall changed the name of the one-room library to the Buckingham Library. The library had 1,500 books in 1878. Edward C. Wolcott '86, Mary Rippon, and James Raymond Brackett supervised the library from 1883 until 1890 when Charles Lowrey was appointed Librarian.

By 1894, Lowrey and his predecessors had built the library holdings to 6,973 books and 2,381 government documents. After Lowrey's death in September 1894, Alfred E. Whitaker was named Librarian. He was the first trained "professional" librarian in the University's history.

A new building was approved due to rapid growth of both the University and its library in the 1890s. The new Buckingham Library building opened for business on January 4, 1904 with 30,000 volumes.

Alfred Whitaker retired in 1909 and was succeeded by Walter L. Barnes for two years. In June 1911, C. Henry Smith was named Head Librarian and held that position until his death in 1937. He built the library to 285,000 volumes and, when Ralph Ellsworth took over as Director in 1937, the Buckingham Library ranked 24th in the country. Within that first year of Ellsworth's tenure, the state legislature passed the first academic building mill levy since 1917. President Norlin chose a new library building as the first item on the list. In 1938, Ralph Ellsworth began planning his first library building with notable campus architect Charles Klauder [more about Norlin library architecture].

Many innovative ideas were incorporated, including a divisional library arrangement and fluorescent lighting fixtures. The new library was to be the largest library building between Chicago and the west coast, and was to be named in honor of George Norlin, President of the University from 1919 to 1939. The doors of Norlin Library officially opened on January 6, 1940. Norlin Library became the central building in a campus-wide system, with additions to the structure in 1964 and 1976. The John Garrey Tippit Memorial Sundial plaza was dedicated on May 12, 1995.

The Business Library was remodeled in 1991 and the Douglas W. Buck Electronic Library was installed to provide access to an expanded range of electronic information technology.

The University Libraries now include, in addition to Norlin, four branch libraries located in separate academic buildings: Business; Earth Sciences and Map; Engineering, Mathematics and Physics; and Music. Norlin Library houses the Humanities, Social Sciences, Life Sciences, American Music Research Center, Children's & Young Adult, Popular Reading, Asian Studies, and Special Collections and Archives. The University Libraries have been a depository for federal government publications since 1877 and a regional depository since that program began in 1968. That depository is also located in Norlin Library.

The University Libraries participate in an active interlibrary loan program and serve an important role as a major resource for the State of Colorado.

The current Libraries system, a constantly expanding network of resources, connects users with: