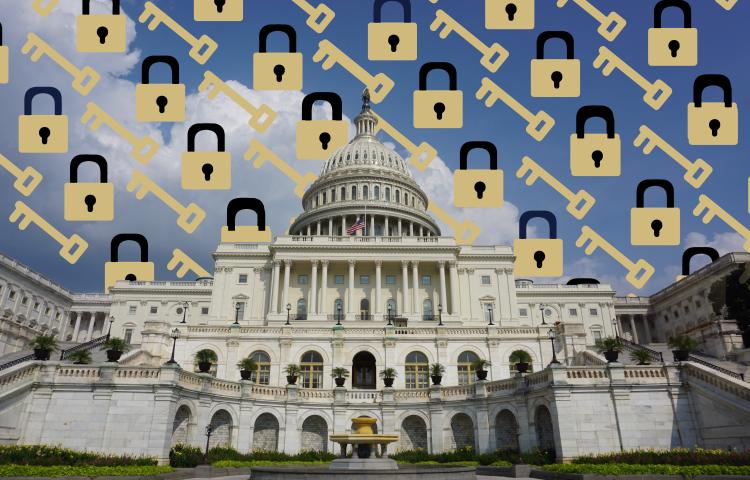 Image is a derivative of quick-ps-qqhD8avcY7k-unsplash.jpg by Quick PS on Unsplash.

This is a special audio documentary affiliated with Opentober, a month-long celebration of open access at the University Libraries—and a reminder that we as citizens have the right to an open and responsive system of government for the welfare and wellbeing of the communities they represent.

The University Libraries understand that elections are pivotal to the quality of our country's governance. To have an open government means that all citizens have the right to access the documents and government proceedings, allowing for effective public oversight and a healthy democracy. But research has shown that over the years, people have become increasingly concerned that they no longer have access to the information they need to effectively participate in the democratic process.

On this episode of CU at the Libraries, Scholarly Communication Librarian Melissa Cantrell investigates what constitutes an open and transparent government, where this societal concern is coming from and why advocating for an open government at this moment in U.S. history is both unique and important.

The University Libraries strive to support an information-empowered world and your right to vote. Additional election day resources are available through the Government Information Library.

In theory, living in a democracy means that everyone can easily access government-held information and that our elected officials will act transparently and can be held accountable for their actions.

The Freedom of Information Act (FOIA), is instrumental in maintaining open government. Basically, FOIA is the law that ensures the public knows what the government is up to.

Regional Federal Depository and Head of the Government Information Library Kate Tallman sees a lot of researchers, including journalists assuming they need to make a FOIA request.

"In reality, a lot of those records are actually available to them in a different format," said Tallman.

The Department of Homeland Security has made exemptions to the law over the years regarding information they can withhold. This includes classified information that would pose a national security threat, internal personnel rules of an agency and some geological and geophysical information.

Van Hoye says that the FOIA is important to maintaining an open government in America because the U.S. Constitution does not specifically indicate that the public can have access to government-held information.

"That's one of the reasons why openness can change, depending on who the president is or who is in charge," he said.

So in 2020, FOIA continues to be the public’s safeguard for knowing how elected officials are using taxpayer dollars to create policies, laws and various initiatives, and experts note the public does have more access to information than the public likely knows about. According to Tallman, the U.S. government is the largest publisher in the world and the vast majority of those publications are open and available to the public.

"One thing that’s really unique about the United States government is that agencies do have this autonomy to decide initially what kind of information they are going to publish and then how they’re going to go about doing that," she said. "But one of the issues we have within our government and how we make information available is, simply, that it’s very scattered and complicated. Government information is located in different places and it takes a lot of strategies, particularly those used by librarians, to find that information.”

For instance—according to the 2020 Federal Register Index, as of October 21st, there are 252 federal agencies responsible for regulating industries from the IRS in the U.S. Department of Treasury to the NSA in the U.S. Department of Defense. Tallman and Van Hoye both note that for the average person, it would take time and resources to be able to utilize our open government effectively.

Roberto Monico, a PhD candidate in Ethnic Studies at CU Boulder, can attest to how difficult it can be to track down information that is in the public domain. He’s working on his dissertation, which is about how statistics were used by the police in Los Angeles from the 1950s and 1960s to racially criminalize people in nonwhite neighborhoods.

“Chief William H. Parker was the Chief of Police of the Los Angeles Police Department from 1950 through 1966," Monico explains. "He would disproportionately send more police officers into these nonwhite neighborhoods, as opposed to the white parts of the city. And he would be able to collect a lot of crime statistics and data. That was his pretext to send more police officers, citing that there’s more crime in these nonwhite neighborhoods.”

Monico relies on open government data to inform his research. But, he’s finding that the data aren’t all in one place.

“I believe that this type of information because it’s public, the LAPD and other law enforcement departments should publish the data that they have, especially when it comes to arrest records and how they’re categorized," he said. "There should be a better method of compiling all this data where one can easily access it and see all the years in chronological order.”

A 2019 Pew Research Center report found that about two-thirds of Americans felt that the federal government intentionally withholds important information from the public that it could safely release.

But sometimes the government does have valid and legal reasons to withhold information. The Health Insurance Portability and Accountability Act (HIPAA) is one of them. This law is designed to protect the privacy of individuals and most people would agree they wouldn't want their medical information to be widely shared. But what if that individual is also the President of the United States and his or her health information is also a matter of national concern? That was an issue in the news when President Donald Trump was diagnosed with COVID-19 in October.

“When it comes to things like the medical condition of the president, he is protected under the HIPAA act so his private medical information is protected," Tallman explains. "But at the same time, there’s a tradition where the president’s doctor steps up once a year and provides us with an update on his physical condition. We need to know that the president has a sound mind and is in good health to be able to run the country.”

Tallman goes on to explain that competing laws made it difficult for the public, in this situation, to distinguish what they had a right to know.

“This election has been really interesting because there has been a lot of information released by different means," Van Hoye said. "Some of it is information that wasn’t meant to be released and then was released through backchannels like the press and whistleblowers. Sometimes information that is presented to the public is not always full, or it's been redacted in some way. I think that creates issues of trust within our society.

The same Pew Research report cited above found that overall, many Americans are seeing declining levels of trust in the country, whether it’s their confidence in the federal government and elected officials or their trust in each other. Not being able to trust our neighbors makes it even more difficult to have conviction in your personal views, which can make holding our elected officials accountable for their actions, or inactions, even more challenging.

“Accountability is the cornerstone of any healthy democracy, where the people are charged with holding our government accountable for its performance, it’s misconduct, it’s successes.”

Professor Helen Norton is Chair of Constitutional Law at the University of Colorado Law School. She says accountability is the cornerstone of any healthy democracy and goes on to explain that a healthy democracy is where the people are charged with holding our government accountable for its performance, its misconduct and its successes.

"If you have access to information and it helps you to be part of a discussion, it helps you to know the rules of the discussion, which gives you power," he said. "You can see that in town council meetings or city council meetings where you have a certain set of rules and decorum that you’re supposed to follow. And oftentimes, you’ll see someone who is testifying or talking to this council and they’re yelling and they’re upset and the chair or the head of the committee will be saying things like, 'We need to have order! We need to have order!' How is the citizen supposed to know what the decorum for the meeting is supposed to be if they have never been to a meeting?"

Understanding that information holds power allows the public to participate in societal discourse. But here’s the problem, according to Norton.

“Information is repelled often as a tool by the powerful to retain power," she said. "When access to information is asymmetrical when it’s equal, that means power too is unequal. We have inequalities in society. For example, the cause for anti-racist policing in the wake of the killing of George Floyd. And other African Americans, we can't figure out the extent of that problem and we can't figure out whether or not we're making any progress on that problem unless you have information. Information about who is being stopped by the police, and why and at what rates, who is being searched and why and what rates, who Is experiencing use of force and why and what rates we need that information. And that's why much of the anti-racist initiative with respect to community policing has to do with data transparency."

“Not only does it expose a lack of resources but covert has also exposed the lack of urgency coming from our political leaders, both parties included, especially during an election year" Monico adds. "As a result, we see people marching on the streets, demanding social justice and equity.”

Norton says that it’s on the public to hold our elected officials accountable.

The University Libraries want you to feel empowered to find open information about your governments and to feel empowered to question when you absolutely can’t find what you need to know about your elected officials and your society. According to Tallman and Van Hoye, the closest researchers will find to a central hub for government records would be the National Archives and Records Administration (NARA). NARA collects government records, government data, some government publications and has control of any classified information from a defunct agency. For researchers looking for government publications only, Tallman and Van Hoye recommend exploring the Federal Depository Library. While the Government Information Library will not submit FOIA or Colorado Open Records Act (CORA) requests for patrons, the library will help patrons fill out the form if the information they are looking for is not publicly available.

When information itself is politicized, it can be difficult to know what information to trust, or how to interpret it. But we need open and transparent information in order to make decisions, and to elect others to make decisions, about healthcare, the economy, COVID-19, racial injustice, and so many other issues. So, along with everything that presses for our attention, open access and open government are on the ballot as well. How can a government that is held accountable for its transparency of information help to empower you? We all play a role in demanding more openness from all of our elected officials through the power of our vote.