Upon immigrating to Illiff, Colorado in 1913, Minosuke and Tomi Noguchi had agreed that any of their potential Noguchi children would receive a college education just as Minosuke and Tomi had in Japan. The couple eventually settled in Sterling, Colorado, and had five daughters who all went on to attend Colorado universities. 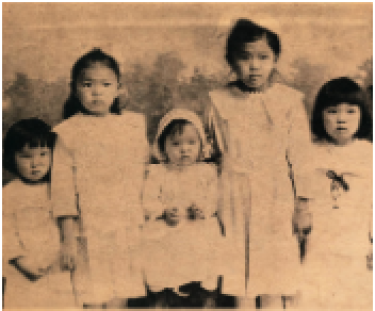 Sugi Noguchi graduated from CU Boulder in 1939 with a Bachelor of Science and in 1943 as a Doctor of Medicine in Pharmacy. After practicing medicine across the U.S., Sugi joined the U.S. Army Medical Corps and served for eight years, including in the Korean War, and even spent time in Japan during her service.

SuZan Noguchi graduated from CU Boulder in 1938 with a Bachelor of Fine Arts in Illustration and a minor in biology. She became a successful illustrator of children’s books and educational models, especially those having to do with science and nature. During her time at CU Boulder, SuZan became president of the university’s now-disbanded chapter of Delta Phi Delta, a national arts honor society. She also served as president of the Cosmopolitan Club, which offered a social setting for international and American students to gather and learn about foreign countries. During her time as Cosmo Club president, SuZan was responsible for organizing events showcasing cultural dances, meals, and other festivities.

At one event in 1937, SuZan served as toast mistress at a Cosmo Club event attended by then-President George Norlin and his family. In a letter to SuZan from Enrique H. Reid in the spring of 1937, Reid stated, “If you have succeeded in making a concrete contribution to your campus by encouraging a mutual social and intellectual fellowship among American students and students from abroad as I feel the Club I am most intimately associated with has, I am sure that you as President, your officers, and your entire membership, on whom so much depends, deserve a deep and sincere vote of thanks for your labor during the past nine months.”

Kisa Noguchi graduated with a Bachelor of Fine Arts & Sciences from CU Boulder in 1942, four years after her sister SuZan. Kisa followed in Sugi’s footsteps by joining the U.S. Army. She served in the Intelligence sector as a specialist in the Japanese language. After her service in the Army, Kisa went on to become a successful artist and illustrator while raising two daughters of her own.

Tsune Noguchi and Yoshi Noguchi pursued similar paths to their sisters Sugi, SuZan and Kisa. Tsune received a bachelor’s degree as well as a master’s degree from the Colorado State College of Education. Tsune went on to teach and became a small business owner using the artistic skills that are so prevalent in the Noguchi family. Yoshi also received a bachelor’s degree from the Colorado State College of Education, later serving in the U.S. Air Force during World War II. Like Tsune and Sugi, Yoshi spent time in New York while raising her children.

This family of five deeply talented, innovative, and accomplished sisters is just one of the many stories we have been working to elevate through the University Libraries Archives’ CU Japanese and Japanese-American Community History Project, which is supported by the CU Boulder Outreach Committee. We look forward to sharing more of our findings, and the diverse history of our university, with the CU Boulder community.

​
Categories:
Return to the top of the page
Submit Feedback