In the Fall of 2019, Megan Friedel (Head of Archives) and Adam Lisbon (Japanese & Korean Studies Librarian) received an Outreach Award from the CU Boulder Outreach Committee for the CU Japanese and Japanese American Community History Project. A major part of the project featured the use of student interns to investigate archival resources as a preliminary effort to build sources on an underrepresented University of Colorado Boulder population. 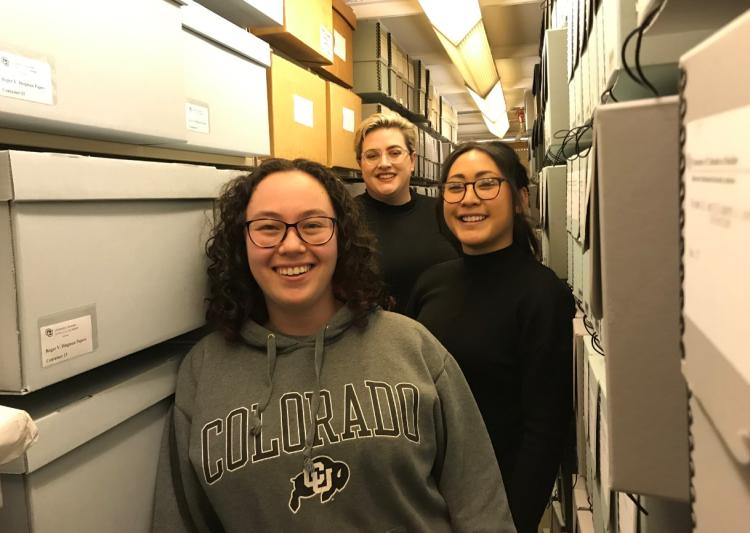 Three students were selected from a competitive pool of undergraduates to participate in a project that would virtually allow CU Boulder to travel back in time. Kami McDaniel, Maria Aki, and I were given the opportunity to research and resurrect the hidden histories of Japanese and Japanese American students, staff, and faculty throughout CU Boulder’s history in hopes to better represent the Japanese community and the legacy these individuals have left on campus.

In our research we have found numerous and notable stories of Japanese and Japanese American students, faculty, and staff who have walked the halls of CU Boulder. As one could imagine, American history has not portrayed the experience of minority groups as accurately or fully as one would hope. Many inspiring stories have been buried and therefore unacknowledged. So on behalf of Special Collections and Archives, our mission is to discover and help publicize these remarkable accomplishments made by our Japanese and Japanese American alumni, faculty and staff.

Thus far, we have uncovered many past achievements of CU Boulder scholars and staff that have made lasting contributions to the campus and their professions. Listed here are only but a few of the many stories that were discovered:

Whether it be then or now, the Japanese and Japanese American community made enormous sacrifices to become successful in their endeavors. As interns in this project, we are committed to revealing the record of this CU Boulder minority population and acknowledging their accomplishments in a way that will bring it to the spotlight.