PASCAL materials: delivery suspended
Effective 12/6, delivery of items from PASCAL will be delayed due to a building issue. Until service is restored, you can request via Prospector. We apologize for the inconvenience.

The new year marks the centennial anniversary of the 19th Amendment, in which women were guaranteed the constitutional right to vote. To commemorate this historic milestone, the University Libraries Special Collections has curated “On the March to Women’s Suffrage,” an exhibit featuring three centuries of women authors and activists who were instrumental in paving the path toward women’s political and social equality.

“This exhibit contextualizes the suffrage movement within the broader struggle for women’s rights,” explains Sarah Vlasity, the project lead who is currently a librarian at Boulder’s Carnegie Library for Local History. “It traces a path from eighteenth-century efforts to promote female education to nineteenth-century advocacy for expanded social and legal rights, to state and national suffrage movements which culminated in the ratification of the 19th amendment in 1920.”

The earliest piece on display in the Special Collections and Archives Classroom is an original copy of “A Vindication of the Rights of Women” by Mary Wollstonecraft (1759-1797). In this work from 1792, Wollstonecraft posits if girls and boys are given access to the same education, women would become not only capable wives and mothers but skilled contributors to society.

The exhibit also has a facsimile copy of the “Declaration of Sentiments” from the Seneca Falls Convention in 1848. Modeled after the Declaration of Independence, convention participants unanimously approved all resolutions associated with the document, save suffrage which was debated vigorously before passing 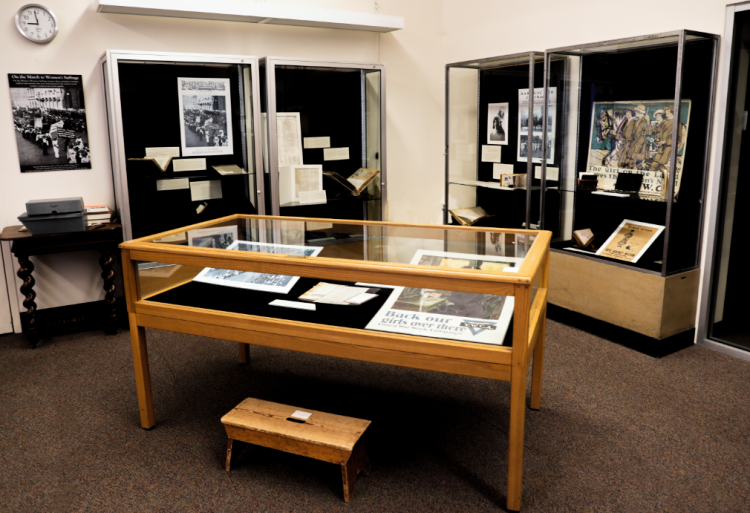 Among the other materials in the exhibit is a copy of a handbill from the Sixteenth Amendment Convention organized by the National Woman Suffrage Association in 1878. As Vlasity points out, the exhibit explores concurrent issues such as racial equality.

“The women’s suffrage movement is intertwined with the fight for racial equality and the interplay is complex,” said Vlasity. “Many early women’s rights activists were also abolitionists.  Differences of opinion on an amendment to enfranchise African American men, however, fractured the movement in the late nineteenth century. Race relations also impacted the ratification of the 19th amendment as southern states feared an imbalance of power.”

Documents on display such as “Will the Federal Suffrage Amendment Complicate the Race Problem?” exemplify this idea. This handbill was circulated from 1915 to 1917 using census data to argue that women’s suffrage would proportionally decrease the impact of the recently gained African American vote in the south.

World War I altered the course of the women’s rights movement, as exhibited in the Special Collections and Archives Classroom as well with advocacy posters, artifacts from women who worked as nurses during the war. The exhibit in the Special Collections and Archives classroom has become increasingly popular due to its curation and its timeliness. English, history, and engineering classes, among others, have visited the exhibit. 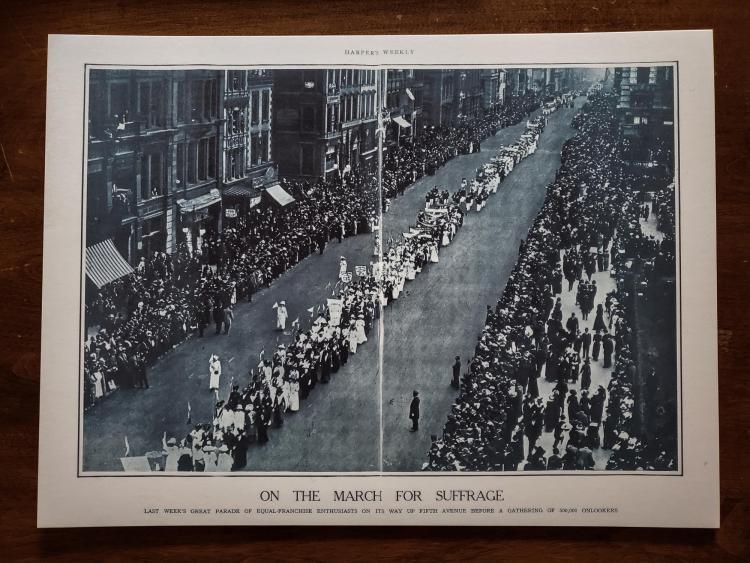 Jobin said, “I believe that having students engage directly with archival and primary source materials helps them to explore the real work of historians and how we make sense of the past in ways that are more rigorous than just the consumption of end-user history textbooks. The suffrage exhibit in Special Collections inspired students to explore the kinds of questions that can be asked of such sources and ways to put together some of the answers we seek.”

“This exhibit shows that women’s suffrage has been really long and drawn-out,” Susan Leigh Guinn-Chipman, Instruction and Exhibits Program Manager for the Libraries Special Collections, Archives, and Preservation (SCAP) department said. The 19th amendment was adopted into law on August 18, 1920. As Guinn-Chipman noted, 100 years is not a long time comparatively. That’s why this exhibit is important to share.

“On the March to Women’s Suffrage” is available to visit by making an appointment with the Special Collections unit. For more information, please email sca@colorado.edu.