This transcript of the CU at the Libraries episode “The Man Behind Folsom Field” has been rewritten for the University of Colorado Boulder Libraries news site. Press play to listen to this episode below or find us on Apple Podcasts, Spotify, or wherever you listen to your podcasts.

Deborah Hollis: “Behind every place are the people who have given it its meaning, and those finding a sense of place in legacy. In the Libraries’ Special Collections and Archives, there are boxes upon boxes of letters, photographs, and documents from the Folsom family, a familiar name around this campus.

“This episode of CU at the Libraries takes on the father of CU Football and law professor, Coach Fred Gorham Folsom and how the stadium got its name. By the end of this episode, we’ll have a fuller picture of the man behind the field and his legacy from the yard line.”

Mel Tucker: “Everyone in the country knows it’s one of the great venues for football, with the flatirons in the backdrop.”

MT: “When I was in college, CU was one of the top football programs in the country.”

DH: “He actually played at Folsom Field back when he was a student at the University of Wisconsin.”

MT: “It was a night game, and I remember that the place was absolutely rocking! The fans were incredible. Ralphie was running at twenty-five miles an hour. It was just like a great environment for football!” 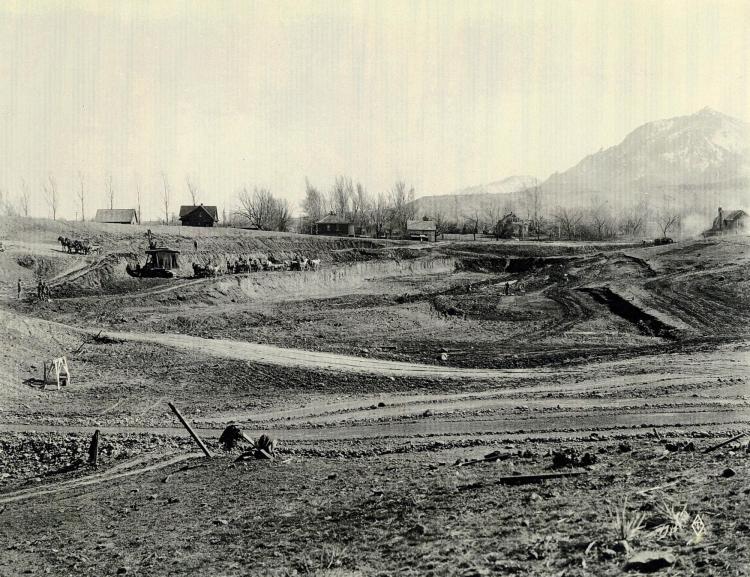 DH: “Clearly, football has deep roots in CU Athletics and CU Boulder as an institution, and it's playing fields have become legendary in their own right. Football started at CU Boulder in 1890 without an official field. The first football field was named in honor of Harry Gamble.”

Mark Johnson: “Harry Gamble was a CU student who played on the football team for six years. Three of which he served as team captain. He’s considered to be a significant contributor to the beginning of CU Football.”

DH: “Recognize that voice? That’s Mark Johnson, the Official Voice of the CU Boulder Colorado football team. We asked him to lend his voice to relay this part of the story.”

MJ: “There were no seats! And at that point, it became clear that a new, larger stadium would have to be built to accommodate the ever-growing popularity of football here at CU.”

DH: “Gamble Field was where the football team practiced and played for 26 years. But sometimes, we outgrow spaces and need to make room for more fans. The 1923 CU Football team had an undefeated season and the crowds that came far exceeded Gamble Field’s seating capacity.

“This is the point in the story where we really start to dive into the person behind the place." 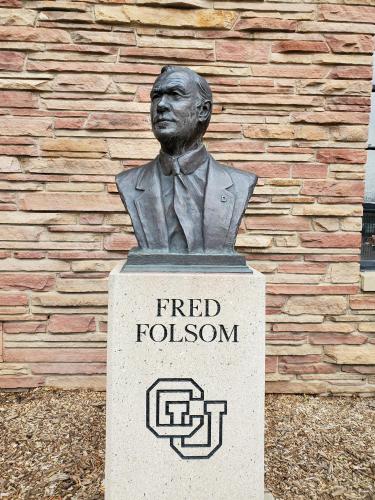 DH: “Fred Gorham Folsom came to Boulder in 1895 to coach CU Football when he was just 21 years old. He coached the team while he attended law school and later after he earned his law degree, Folsom joined the law school faculty and had a local law practice. He was the epitome of a renaissance man.

“Fred Folsom III learned almost everything he knows about this renaissance man from his father, Fred Jr. We recently caught up with coach Folsom’s grandson by phone. Of all the stories he’s gathered over the years, Fred the III understands his grandfather to have been a lawyerly coach.”

Fred Folsom III: “Every spring, he would get the latest version of the rules of football and he would spend all spring, part of the summer, annotating every page. And he would ask himself, what does this rule say, and what isn’t said? What is implied? What is allowed?”

DH: “Coach Folsom came to CU Boulder when football was in a dangerous position. President Theodore Roosevelt had been recognized for saving the sport from banishment because it was not safe.”

FF: “They just wore leather hats, there were no rules, and people were getting killed during football season.”

DH: “With the formation of the NCAA in 1910, their new set of rules and his interest in law, Coach Folsom helped change the way the sport was played at CU Boulder for the better.

“Coach Folsom was known for playing by the rules throughout his coaching career. As a result, he resigned as head coach of the Colorado Buffaloes in 1915 with 77 wins. And a reputation for being positive in character. This comes from professor of business law and former CU Football player, Walter B. Franklin.”

“We remember his characteristics so distinctly. For his was a positive character. There was nothing negative in his personality. The qualities, so predominant, were directness, unwavering adherence to truth and honesty, fairness, tolerance and his dogma never to compromise with what he conceived to be wrong.”

DH: “He was chairing the athletic board when athletics took on the task of building a stadium, in an 8-month period of time, for the next season. Once it was decided where the new stadium would live, there was the matter of financing the venture. CU Athletics leaned on Fred’s law expertise to tackle this challenge, and it worked! Folsom drafted the trust under which the stadium was financed without any loss to the investors of the state. The venue opened in 1924.

“The stadium continued to thrive without a name for many years. People alternated between calling it “College Stadium” and “Norlin Stadium,” but neither of those names were ever officialized. It wasn’t until 1940 when the Folsom name was nominated. In an official letter to then CU President Robert Stearns, Franklin endorsed the Folsom name.”

“It is sometime referred to as Norlin Stadium, but no official name has even been given to it. And Dr. Norlin has objected, to me, that he would not have it so-called.”

DH: “But Coach Fred Folsom would never know that the stadium had been named in his honor. He passed away on November 11, 1944, two weeks before the stadium was officially named Folsom Field. The official dedication occurred at the 1946 homecoming game.

“The fall of 2019 marks the 73rd anniversary of the stadium’s dedication in Coach Folsom’s honor. And this past November, Coach Fred Folsom was officially inducted into the CU Athletics Hall of Fame. His grandson Fred Folsom III, whom you have heard from, delivered his induction speech.”

MJ: “Well when you say the name Folsom around this campus, it carries a legacy.”

DH: “This legacy lives on through the spirit of athletics at CU Boulder. This month, Coach Tucker is celebrating his first year as the leader of CU Boulder Football, and sees parallels between Folsom’s legacy and the one he hopes to make.”

MT: “When people think about a football program you know most of the focus is obviously on the field and the performance of the players but it's so much more than that. Football is a great game and as a football coach, it is my responsibility to help all of our young men develop not just on the field, but off the field.”

DH: “But that legacy of fairness is exemplified by the generations of Folsom’s that have come after, which is backed up by the archival record in Special Collections & Archives located in Norlin Library. The Coach and his wife Mary, as well as their four children, Franklin, Sarah, Helen and Fred Jr. were graduates from CU Boulder. In the future, we hope to bring you more stories of the Folsoms from the Archives.”

Fred Folsom III: “As a third-generation Fred Folsom, this is the coach that I learned from listening to my dad talk about him. Go buffs!”

Special thanks to CU Athletics for lending sound for this episode