If you were asked, "What is Digital Humanities," how would you respond? If you're unsure or downright don't know, this week's host, Nickoal Eichmann-Kalwara, starts, by defining Digital Humanities (DH). In this episode, Nickoal will explore with you the many different flavors of DH around the world with Dr. Vilja Hulden, Conny Cassity, a Ph.D. candidate in the English Department, and Phil White. This is the official transcript for the episode "Defining Digital Humanities at CU Boulder" from CU at the Libraries.

Press play to listen to this episode below or find us on Apple Podcasts, Spotify, or wherever you listen to your podcasts.

Nickoal Eichmann-Kalwara: “From the University of Colorado Boulder and the Rocky Mountains this is CU at the Libraries, where information becomes knowledge through storytelling. I'm your host Nickoal Eichmann-Kalwara, Digital Scholarship Librarian and assistant professor at the University Libraries in the Center for Research Data & Digital Scholarship. But, beyond, that I'm a digital humanist or someone who engages in applying open and ethical computational methods in the humanities.

“Because it can be complicated to define, I'm in the Norlin Commons asking students what they think when they hear the phrase digital humanities (DH).”

Student 3: “Absolutely no idea what digital humanities is.”

NE: “These responses aren't very surprising. But that's why we're doing this. Here let me define it for you.

“DH is often considered a newer field of study. According to canon, it has roots that date back to the 1940s and then the field of Humanities Computing from the 1960s. These focused on computational linguistics and text-based research. It's only since the early 2000s that it has been expanded to encompass a big tent, that's what we call, and practiced all over the world. DH is more than a set of methods or tools. It's also a community of practice, one that values collaboration, interdisciplinary, openness, experimentation, accessibility, and multi-modality. And that can promote change.”

“I hope you're starting to gather that there are a lot of different flavors in DH around the world and even locally, within universities. In DH, we use a number of methods and tools to explore interdisciplinary research and public scholarship.

“Let's hear about them starting with a history instructor, an English graduate student, and a science librarian.

A screenshot of a text analysis of "1984" by George Orwell being performed in Voyant Tools, an open-source web-based application.

“This is Dr. Vilja Hulden, in the history department at CU Boulder. She has seen success using the text mining approach, topic modeling, to help with her research.”

Dr. Vilja Hulden: “There's lots of aspects to defining DH, obviously. What I think is really unique about the way that DH has started to work at CU is that there's a real appreciation of both the digital and the humanities. It’s not just training humanities people in basic technology skills, or that we’re getting engineers a basic look at humanities, but rather that we’re trying to find how they can be fertile together. How they can create new questions together.

“In research, what DH really does for a humanities person, at least, is try to encourage them to think about the different levels at which the material that you have can be analyzed. In traditional humanities, you would delve into a specific document. But then, using digital methods, topic modeling, for example, you might zoom out and look at a ton of documents and use the computer to figure out what are the automatically extracted topics in this material.

“For example, I have done some research on labor newspapers vs mainstream newspapers in early 20th century America, looking at the different topic distributions in the two different types of material. Then you build arguments on top of that. To build those arguments, you can't have the computer do that for you. All a computer can do is give you one view of the material. Then you use your expertise and your knowledge about the history of that time and your ability to delve into the specific documents, delve into other materials, and use those to make sense of the topic model that you've created.”

NE: “Thank you Dr. Vilja Hulden for discussing the interdisciplinary nature of your work as it relates to DH in your research.”

Conny Cassidy: “My name is Conny Cassidy. I'm a Ph.D. candidate in the English department at the University of Colorado Boulder.”

“My research focuses primarily on how women in England, in the 18th and 19th centuries, are building community through their writing. In particular with DH, I am working on a chapter right now that looks at collections of biographies that women have written about each other. I'm using network analysis to actually visualize the connections between these women. So, I plot into these maps the different social connections and how they show up in the text. Then I use that to see who are the primary players are in the literary field at that time.

“It's important for the research that I'm doing here in two ways. One is for visualization purposes and the other is statistical. In terms of visualization, it takes the raw words that you have in the book and makes visible patterns in ways that you can't pick up. Your brain doesn't think that way when you're reading a text. You're not going to necessarily keep all 400 of these women in your head as you're reading the book. This actually puts a visual map together for you to sift through and make sense of. It is visually super important and super helpful for noticing those patterns.

“In terms of statistics, though, in just three different volumes, I found over 400 separate women listed in these books, over a thousand connections between women in these three collections. This goes directly against these ideas that we have entrenched in our education about women just didn't write as much or women didn't know each other as much. They weren't connecting. They weren't out in the public sphere as much. Or that, somehow, women didn't rely on each other. That this is all the men that are organizing everything for them. And, that's not an accurate picture of what literature was like for the average person writing an 18th or the 19th century.

“And so, when we think about the way that we teach, especially things that are from a long time ago that we don't have immediate access to, it's really important to get this kind of data so that we can have that underlying evidence for why we need to reshape our classes. We’re experimenting at this stage of what are some different ways that we can approach our research with different kinds of questions and different kinds of tools and start to uncover real new insights into this material.

NE: “That was Conny Cassidy, a Ph.D. candidate in English using network analysis to further her understanding of DH.

Phil White: I don't necessarily consider myself a digital humanist, I don't come from a humanities background.

“In terms of the work I do at CU, I tend to facilitate digital humanities works. So, for example, maybe I might be working with a history class on setting up a GIS project. You know, in that sort of setting, when folks come to me, often they don't have a background in any sort of geospatial methods or research. So, my job is to make it approachable to them. Very simple things are available like an Esri story map, which is a great way for someone to tell their story digitally.

“And then kind of the other side of that is maybe someone comes from like a computational background and wants to work in Python, or work with some really advanced web mapping applications as their end product for their stories. And I help people with that too.

“So, there's kind of both ends of the spectrum and then points in between with regular or desktop software that I can help them out with. Any type of scholarship is really a form of storytelling, right? And DH is a new way to tell the same sort of stories that you know historians and folks in the humanities have been doing the whole time, with a new set of tools.

“I think a lot of folks identify DH with tools and methods and that's one thing I help to facilitate. In the three and half years that I've been working here, doing a lot of teaching and technical help around geospatial methods, I have worked with a whole wide range of folks, in social sciences, the hard sciences, and the humanities. And, it is very much a cross-disciplines, multidisciplinary, interdisciplinary thing.

“One of my goals as a professional is to make something like GIS more approachable and less scary because it has this persona of being a hard nut to crack. So, in teaching, making it more approachable in the area of geospatial data. Geospatial data is also one of those things it's kind of like everywhere and nowhere in particular, at the same time. From a library's perspective, it's important to build a good data collection for people to use.

“That's something I've been working on here, too, for folks who are doing this type of work. So that's why we have something like the geo library here at CU in the library. It is our spatial data collection.” 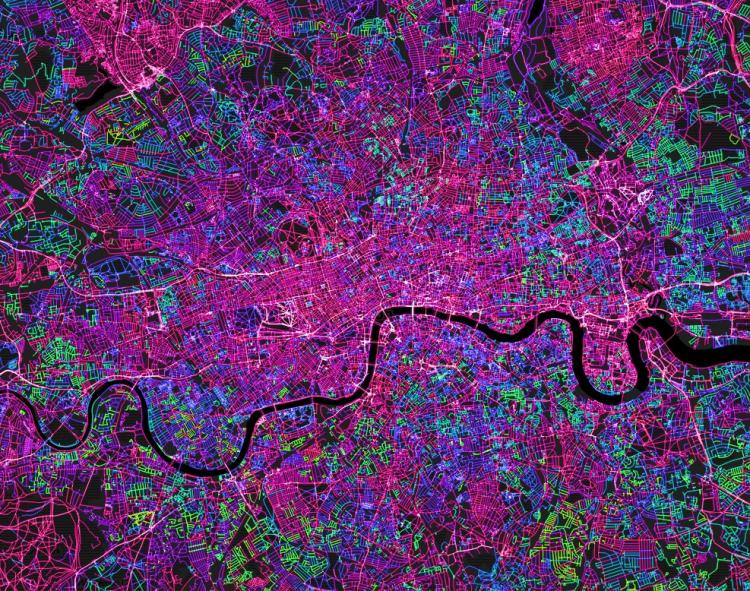 NE: DH is another way to see the world. Sure, it's not perfect: a lack of diversity, representation and global outlook has been called out by the community.DH prides itself on diversity and postcolonial ideals, but that still needs work. And accessibility, so far, hasn't meant accessibility in all terms for everyone. But together we're working on solutions.

The Center for Research Data and Digital Scholarship (CRDDS) is a partnership between Research Computing and the University Libraries. Together, we offer a range of support for data-intensive research, including the Digital Humanities, to both the campus community and the public. From graduate courses, seminars, and workshops, CRDDS wants to help you connect. We have the expertise and infrastructure to help you with your research. CRDDS also offers an Introduction to Digital Humanities course that counts towards our Digital Humanities Graduate Certificate. To learn more, contact digital.humanities@colorado.edu.