This transcript of the CU at the Libraries episode “What is PASCAL, Anyway?” has been rewritten for the University at Colorado Boulder Libraries news site. Press play to listen to this episode below or find us on Apple Podcasts, Spotify, or wherever you listen to your podcasts.

“The Libraries are no longer just involved in storing information, but actually produce information,” Libraries Building Manager Carl Stewart said in the first episode of CU at the Libraries.

In order to do that, the Libraries have had to rethink its ideas around space and storage. In the 1980s it became clear that the Libraries’ overflow needed to be dealt with and no solution at the time seemed easy.

Fortunately, after determining what percent of our books needed to be moved to make more space, then Dean of the University Libraries Jim Williams came to a solution: an off-site library storage facility. It took a few years but in 2001, the Preservation and Access Center for Colorado Academic Libraries or PASCAL, opened on what is now the University of Colorado Anschutz Medical Campus in Aurora.

Today, PASCAL estimates that it holds 2.4 million items such as books, journals, maps, records, DVDs and more. About 2 million of those items come from the CU Boulder Libraries. These items are pulled for CU Boulder faculty, students, researchers, as well as other communities with like-minded needs upon request.

PASCAL isn’t a library; it’s a preservation space that few people get to see, which is a shame because it truly is fascinating and only 40 miles from Boulder.

Like the Librarians who have worked with some of these items for decades, PASCAL acts as a steward of our collections so that our Librarians can work with items of value onsight and any new items that come in.

Learner Experience and Engagement Librarian Courtney McDonald described the unique role that the Libraries play beyond the collections, referring to them as a sort of “third place,” as coined by sociologist Ray Oldenburg.

“Libraries are places where you can bring your stuff and set up for the day,” McDonald said. “You’re gonna camp out and you’re gonna do some thinking and some work.”

PASCAL isn’t quite that. The doors are always locked for security purposes and visitors can’t walk in without an appointment, so it’s not likely that anyone who walks in will leave with what they’re looking for. But there is an additional indicator that differentiates PASCAL from any library.

“You can’t browse,” Brice Austin, director of Circulation at the Libraries said.

Last summer, a group of CU Boulder Libraries faculty and staff visited PASCAL to get this behind-the-scenes look at the off-site storage facility. To give a sense of the landscape, Ashlyn Velte, a processing archivist with the Libraries described what she saw.

“The ceiling is maybe a little bit taller,” Velte said. “There are books on shelves and boxes and it’s kind of like a science fiction movie. The books are all bound in the same things that they would be in the library but they’re all stored flat facing so we can see more of the covers, which means that it’s really colorful.”

Even with access to the bay area where items are kept, it’s impossible to browse. That’s because most items like books are kept in cardboard trays that have the covers facing out and packaged together based on their measurements, not by genre or subject. 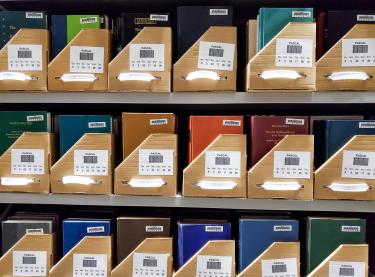 “We want to fit the most amount of materials into the smallest amount of space possible,” PASCAL's manager Michael Kelty said. He has been with the operation since the repository first opened.

Kelty said that when items are unloaded and sized at PASCAL, it’s important that each of the materials is given a barcode and an item record so that it doesn’t get lost.

No pressure, considering we’re not the only Libraries using PASCAL. This further demonstrates that the University Libraries weren’t the only libraries grappling with spatial needs in Colorado or even in the country! In the mid-1980s, Harvard Library worked with an engineer named Reese Dill to create a place for the material they no longer had the capacity to keep on hand.

“Harvard decided, ‘Well we're going to build an off-site facility and we’re going to pack as much material into that facility as we can,’” said Kelty. “‘We’re going to do that by sorting the library material by size, building 30 ft tall stacks with an order picker that a person drove and we would barcode each item and the bar code would tell you where all of this was.’”

Soon, these repositories began to pop up at other libraries. In the 1990s, Dill was commissioned to create the off-site storage facility for CU Boulder and then other community libraries that is now PASCAL.

In the storage bay, the temperature is constantly kept at 55 degrees and 35 percent humidity, as this is a comfortable temperature for paper and books, and it only gets colder when riding the order picker 30 ft up to the top shelf. 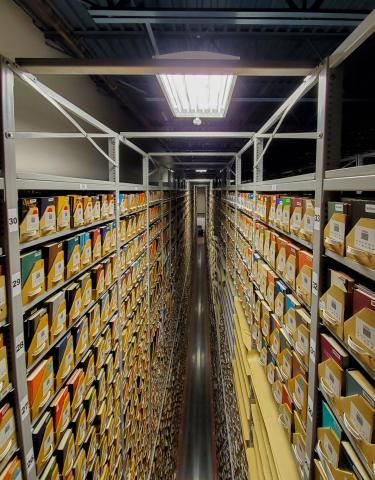 that these are the heights his team will go to fulfill patron requests.

Between 20 to 30 thousand items are transported to PASCAL from the University Libraries each year. Two decades ago, Austin said that these statistics would have made the campus nervous. But over the years, Austin has seen a shift in perspective.

“Back then, the [books and academic journals] were in print,” said Austin. “So much of what we buy now, for journals especially, is electronic that the need for requesting items for PASCAL has gone down.”

This also means that the Libraries aren’t needing to bring as many items to PASCAL as they used to, and the Libraries can have more study spaces for students.

“Students these days need study areas and collaborative spaces and real estate on campus is extremely valuable for all of those reasons,” he said.

As Special Collections and Archives collect, the department continues to work closely with PASCAL. Sean Babbs who does instruction and outreach for Special Collections, said that any items that pre-date the year 1800 stay at Norlin.

“We’re constantly working with our collections at PASCAL to figure out what should be stored on-site, what’s the most heavily used, and what’s the most medium used,” Babbs said. “Items that don’t get used often, we’re okay with sending off-site.”

According to Babbs, PASCAL has about 20,000 items from Special Collections, though more are constantly being added. These items need to go to metadata and be examined by a conservator at the Libraries before they’re sent off to PASCAL. Babbs said there is a high level of trust involved in his unit’s relationship with PASCAL.

“We want these books to last,” he said. “They come here to receive special handling, special treatment, they live in special climate-controlled conditions. We regulate temperature and humidity. We try to limit the light that hits these books. So there is a lot of anxiety when a book does go off-site. I think the reality is that if we want to collect more books, we can't have access at all times. But we can have those books again within 48 hours if we choose.”

Movement and consolidation are areas that University Libraries and other libraries are continuing to find solutions for. The idea being that the existence of digital copies means there may not be a need for libraries to hold onto as many physical replicas of their items.

In the coming years, Kelty said he expects that PASCAL will also be thinking more about best uses for its space. That’s because PASCAL serves as our long-term memory that we don’t want to lose, no matter how our spaces, our technologies or our needs for libraries shift over time to make room for change. Just because our stacks are a healthy level of full and we are creating more doesn’t mean the Libraries and PASCAL cannot connect you with what you need!

PASCAL and the CU Boulder Libraries work together to deliver requested materials to campus within 48 hours. Make your requests through Chinook and pick them up at one of our five branches or ask that we mail them to you. Hopefully when you pick up your order, you’ll have a better sense of the work that was put into pulling that material, and why it’s worth keeping.

Special thanks to the Earth Sciences & Map Library for lending LibCast the space to record.