This transcript of the CU at the Libraries episode “C-U at Norlin Library” has been rewritten for the University of Colorado Boulder Libraries news site. Press play to listen to this episode below or find us on Apple Podcasts, Spotify, or wherever you listen to your podcasts.

It’s the beginning of the fall semester, and everyone’s on the move. It’s that in-between moment where students have about 10 minutes to be all the way across campus for their next class.

Between all of the students, faculty, and staff, CU Boulder is made up of about 40,000 people. So sidewalk space can get sparse.

It’s also one of Boulder’s many sunny days of the year, and students are taking full advantage of that by lounging on the quad outside of Norlin Library. 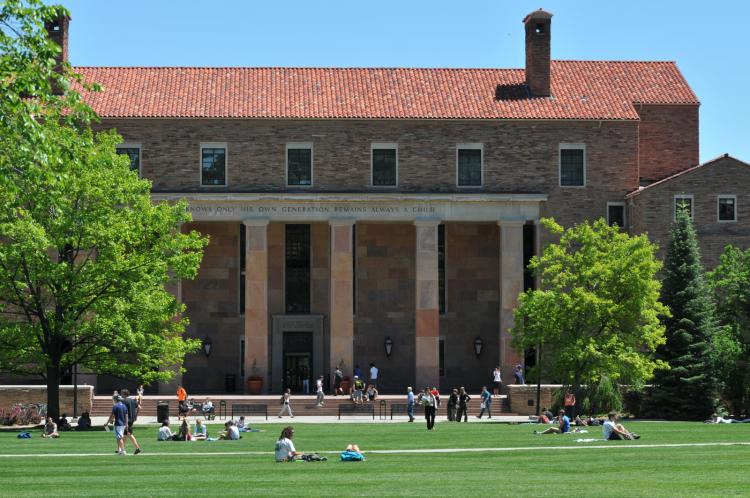 A crowd of students walk up the grand steps of Norlin. There, they are greeted by two quotes that are engraved into the head of the building.

First-year Communications Major Christa McReynolds stopped to read them before heading inside.

“The first is, 'Who Knows Only His Own Generation Remains Always A Child' and 'Enter Here The Timeless Fellowship of the Human Spirit,'" said McReynolds.

The first quote is inspired by Cicero’s book on rhetoric, "Orator." The latter is an original quote from former president of CU Boulder George Norlin. Both were his idea.

“It honestly gives me the motivation to study at the library,” she said. “It makes me feel good about it.”

Although Norlin is a historic building, it wasn’t the CU Boulder Libraries first home.

“Back in 1877, the library was housed originally in a building across the quad called Old Main,” History and Philosophy Librarian Freddy Carey said.

Carey explains that as the university grew, so did its library.

“After that, the library received a donation and became known as the Buckingham library and was then moved to the new Buckingham building in 1904, where it grew to hold 30,000 volumes roughly,” he said. 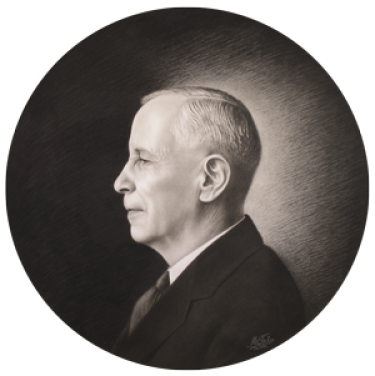 “George Norlin started at the university teaching Greek and literature in 1899 until he moved into the acting president position in 1917, which then became permanent in 1919, until he retired in 1939.”

Norlin Library then opened in 1940. Walking in through the west entrance, we pass the Circulation desk where visitors can check out books and other items.

The Libraries Building Manager Carl Stewart has been working with the Libraries for decades. He is known for giving comprehensive tours of Norlin, and has agreed to give an abbreviated version of his tour for this story, which includes a little bit more about George Norlin.

George Norlin was actually a huge advocate for this library to be built. He worked closely with architect Charles Klauder, who is responsible for the campus’ overall look.

“[Klauder] came up with the architectural vocabulary you see all over campus, with the sandstone and classical elements,” said Stewart. “We call it now ‘Tuscan vernacular’ and it is kind of based on the buildings in and around Florence that have towers like San Gimignano.”

Art and Architecture Librarian Alex Watkins said the first design of the Norlin building was the front facade, as well as semi-circular windows in the back. He noted that since then, Norlin has gone through several major expansions. 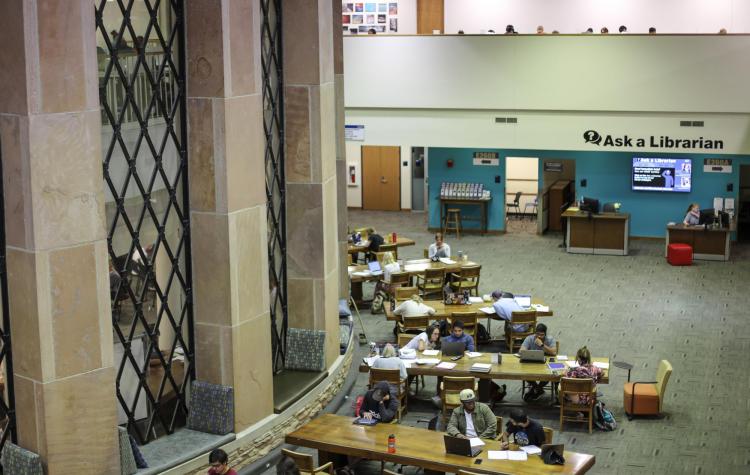 “When the library would have been originally built, the stack tower where all the books would have been was within that sort of semi-circular windowed area,” Watkins said. “Then the windows were probably like the way they are with the big, long, high windows to provide light into the books so you could find the books that you were looking for. It was probably very pretty.”

These windows today are known as the fishbowl. Stewart said this is one of the most popular areas for people to study. It’s not hard to imagine why.

Grand wooden tables jut out of the fishbowl like sun rays. Computers modestly dispersed among small mahogany bookcases and long tables which make for great communal workspaces. Near the center of this space is the Ask A Librarian desk, which is a grand beacon of hope all its own.

“The Ask A Librarian desk has spots for two staff members or faculty members to help the public in what they're doing, what kind of research projects they might have or whatever kind of question they have for a librarian,” he said.

Occasionally you’ll hear someone compare Norlin to Hogwarts. This has to do with two large additions made to Norlin: one in 1964 and the other in 1976, when the library spread its wings on the north and south sides of the building. Watkins said this expansion reminds him of the ship in Star Trek.

“I kind of imagine the Starship Enterprise it has had these two like missiles that went in the back,” Watkins said. 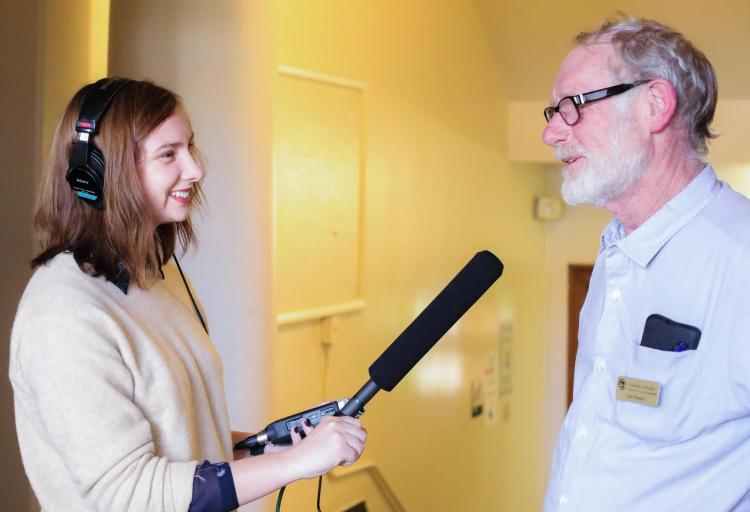 Black and white tiled floors and more large tables showcase the library’s original structure outside of the Special Collections and Archives Classroom on the third floor. In this classroom, materials dating back decades, or even centuries, are often on display for students to browse and even handle with care.

“What’s one of the most important things is through that door is our environmentally controlled areas that’s kept at a relatively stable temperature and humidity at all times,” Stewart said.

Across the way is one of Norlin’s six gallery spaces. Stewart said that over the years, he’s seen the Libraries move to commit more space for exhibits.

“What's interesting here is that the libraries are no longer just involved in storing information but actually producing information and it makes information much more active,” he said. “I think we're going to see a lot more projects where students or faculty produce new information and put it out on display more and more.”

“It's kind of one of those essential parts of our democracy where anything that the government prints is available to all of the people,” he said. "So for that reason, we need to keep our doors open to everybody.” 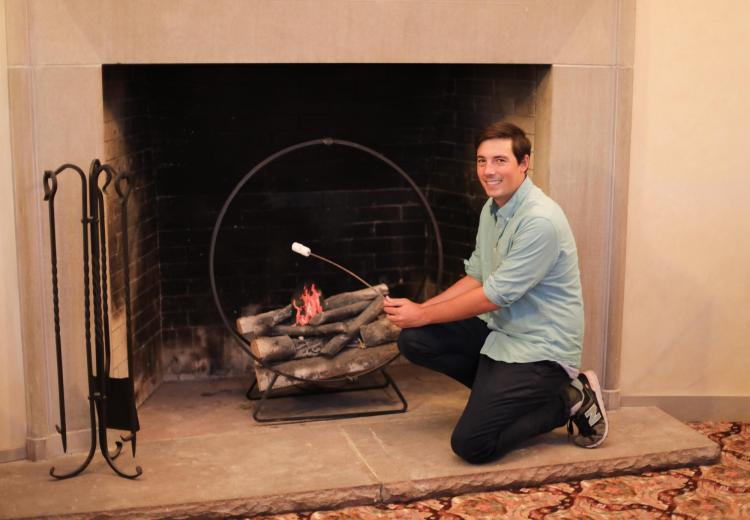 The Center for British and Irish Studies (CBIS) on the fifth floor of Norlin has been compared to the Great Hall at Hogwarts. CBIS is used for our receptions, lectures, and film screenings.

“It’s got the historic fireplace,” Watkins said. “From the outside, you can see the chimneys although I don’t know if we’ve let any fires down there in a long time. My dream is that we would light those fires and have hot cocoa up there. You know, sort of Hogwarts-style.”

Stewart said that for fire code reasons, this will not happen.

From the top floor of the 1970s addition in the elevator closest to those many miles of steel built-in book stacks, Stewart clarifies the floor system that has confused everyone at some point or another. For context:

It’s okay to be confused because there is always someone available to help.

The first floor, east side of the library is what’s called Norlin Commons. This hub was added to the library about a decade ago. The Commons is a space where students can borrow a phone charger, use smartboards in study rooms, or grab a coffee from the Laughing Goat.

“The whole idea of a Commons is basically the idea of having a space that's open for students to do a lot of group projects. It's almost like a study hall where they can post up with their friends and do work, or come and work by themselves,” Norlin Commons Manager Sarah Hagerman said. She added that this is a good space to be a little noisy.

“Not too noisy, but a little noisy,” she said. 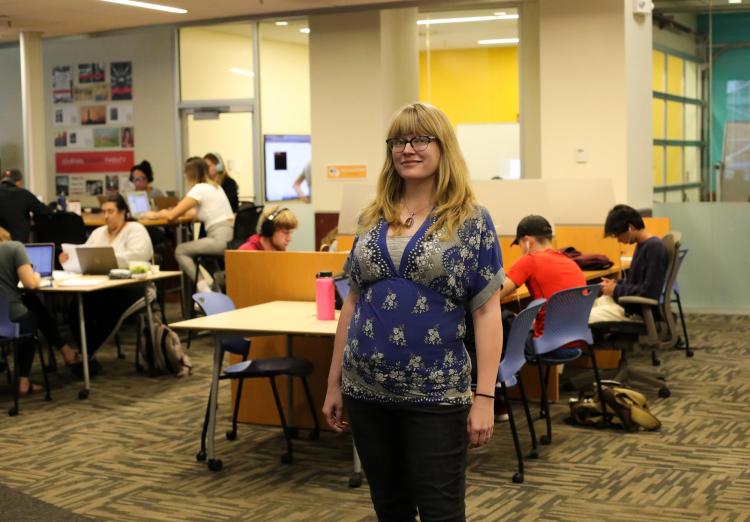 Stewart has an abundance of stories about Norlin, which makes sense. He basically grew up here.

“When I was in elementary school, I went to Flatirons Elementary, and I walked down College Avenue to pick up the books at the table and I’d put them on the reshelving shelf,” Stewart said. “That was my job that my mother gave me.”

His mother, Lenore Stewart, was a librarian with the Libraries. His father Omer Stewart founded CU Boulder’s Anthropology department and was named a CU Legend in 2010 for his contributions in his field and in the classroom.

“The campus has really been my home for my whole life,” he said.

What Carl described is the kind of place that Norlin aspires to be. Where the whole community feels welcome. Where we put our values of inclusivity, empowerment, connectivity in to practice. Norlin is this magical community, which seeks to inspire and serve as a hub of rich learning.

Keep in mind, this was an abbreviated tour of Norlin. We encourage you to explore the library for yourself, as well as our other four library locations.

On behalf of everyone at the University Libraries, welcome to the 'Timeless Fellowship of the Human Spirit’!

Special thanks to the Earth Sciences & Map Library for lending us space to record.