The University Libraries are wrapping up an extensive project this summer that will keep over 60 maps detailing railroad survey reports that date back to the pre-Civil War era accessible to students, researchers, and librarians.

Faculty and staff from the Government Information Library, the Preservation unit, and the Earth Sciences & Map Library are working with interns to strengthen the maps in the U.S. Congressional Serial Set volumes for future classroom use. 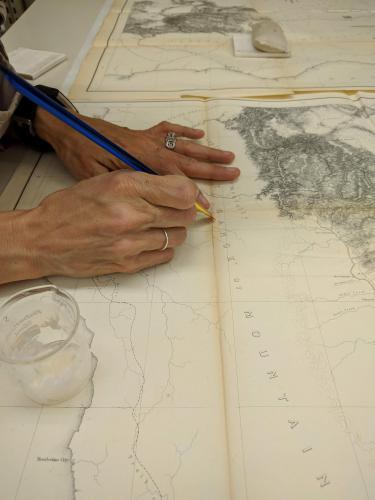 Until recently, these maps were mainly kept in the Government Information Library. Many of the maps, belonging to the U.S. Serial Set volumes, come from the scientific, military, and commercial explorations and surveys of the Western states that took place throughout the late 18th and 19th centuries.

Conservator Hillary Morgan said these maps have been trickling down to the Preservation unit from Government Information for months, with deep folds from being stored in the pockets of volume binders.

“These maps are all made from the same type of paper called wood pulp paper which is very thin and brittle and could easily come apart when unfolded and handled,” said Morgan. “The biggest that we did so far was the Map Of The Territory Of The United States From The Mississippi To The Pacific, and we had to lay it out on the floor to get it in encapsulation and we had to MacGyver it to work!”

This seminal map measures 46x47 inches and depicts the routes scouted by explorers for the construction of the Transcontinental Railroad at that time. Morgan has been working closely with interns Lisa Donovan, a graduate student in library sciences at the University of Denver, and Stacey Brown, an apprentice at the Research Desk.

Donovan and Brown first identified which copies of the serial set maps would be chosen for treatment. Then, conservators from the Libraries provided hands-on training on basic conservation treatment and encapsulation for the maps. As this step in the process was completed, the interns then worked with the Earth Sciences & Map Library to ensure that the maps received catalog records and are stored appropriately.

Brown said that as a recent graduate of library school, she found both the content and variety of work required of the internship to be extremely lucrative.

“It’s unique to work with so many different departments such as reference and instruction and behind-the-scenes work with cataloging and with Special Collections when working towards a Master of Library Science degree,” said Brown. “There are very few programs that focus on learning to identify problems with maps.”

These materials, permanently retained and preserved by the Libraries through a Preservation Steward Memorandum of Agreement with the Government Publishing Office, are used during select instruction sessions to support the primary resource and object-based learning mission of the Libraries. 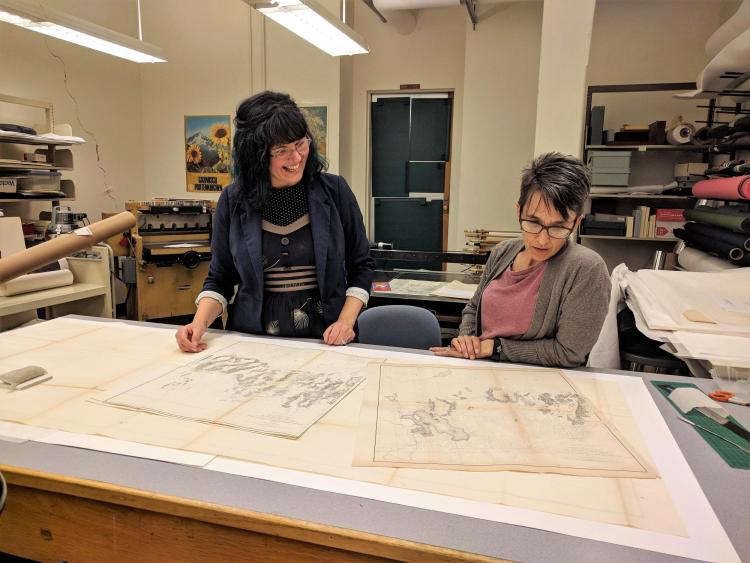 Interns Lisa Donovan and Stacey Brown work on maps from the U.S. Congressional Serial Set volumes in the Preservation unit.

Naomi Heiser manages the Earth Sciences & Map Library map cataloging and often uses the Map Of The Territory Of The United States From The Mississippi To The Pacific among others in object-based learning classes. She said maps that have traditionally been kept in the Government Information Library are being used more frequently in the courses offered in the Earth Sciences & Map Library.

“Geography classes and history of science classes often focus on western expansion in the U.S. and colonialism. These maps are really good for illustrating these two concepts,” said Heiser. “They show clearly why people migrated to the west of the U.S. and clearly show migrants’ encounters with native populations.”

Kate Tallman, Leanne Walther, Lauren Stapleton, Ilene Raynes, and Sheila Zoller also contributed to the U.S. Congressional Serial Set Maps Preservation Project. Participants anticipate the work on these maps will conclude by the end of the summer. When completed, each copy of each map will live in the Earth Sciences & Map Library in a secure setting.