Hanging in shadow over one’s back shoulder, high on the south wall of Macky Auditorium is a tarnished bronze plaque. Having nothing to do with music or the College of Music, played and housed in Macky, there is little reason to bring attention to the plaque, which has by its appearance, been located there for decades. 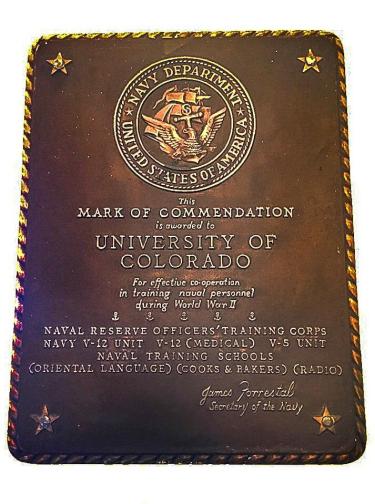 Earlier this year, a similarly forgotten item, a large photograph of assembled Navy cadets, was located in the Chancellor’s Office on 914 Broadway. We at Special Collections, Archives and Preservation were asked: who were these naval cadets? Since we have a U.S. Navy Japanese/Oriental Language School Archival Project, we have some knowledge of the Navy presence at the University of Colorado. Could these naval students have been language students in that World War II program? No, I told them, the language school, that CU President Robert Stearns had helped to bring to campus, never housed any of their students in the former Pi Kappa Alpha House at 914 Broadway. So who were they?

I suspected that they were naval students from one of the other Navy programs that President Stearns had brought to campus between 1942 and 1945: the Radio School, the Cooks, and Bakers School, the Pre-Radar program, the Flight Program, the V-12 Engineering, and Pre-Medical Program, or Navy ROTC. After some sleuthing, by determining the prewar Pi Kappa Alpha telephone number, and comparing it to CU Student Directories, I found that those in the photo were most likely Navy V-12 pre-medical students, which led to larger questions of what these schools were. This prompted my remembering the plaque in Macky, which the Navy had awarded CU after WWII. But we could not initially find the plaque.

It took some doing, but we finally found it. After some research, I found an article in the Colorado Alumnus, which published the letter presenting the plaque to the University of Colorado, the tone of which is interesting. For you see, the plaque was not really for President Stearns, who knew all about the schools and what they had done, nor for the Regents, one of whom was the former governor, Ralph Carr, who had protected the rights of Japanese American citizens during the war. It was not really necessary for such faculty as Albert Bartlett or David Hawkins, who had served in the Manhattan Project at Los Alamos, or for faculty like Donald Willis or Earl Swisher, who had trained as U.S. Navy and Marine Corps Japanese Language Officers at CU and later went to the Pacific, or other professors like Robert Athearn, who served in the Coast Guard during the war. It was not even for professor, then dean, then vice president, then CU President Roland Rautenstraus, because he had been one of those V-12 students himself at CU during WWII. No, like some rediscovered time capsule, this plaque, and an accompanying letter, seem actually a message to us, now, a full seventy years after they were presented, and speaks to the present generation across time.

See full text from the letter, dated 1947 below. 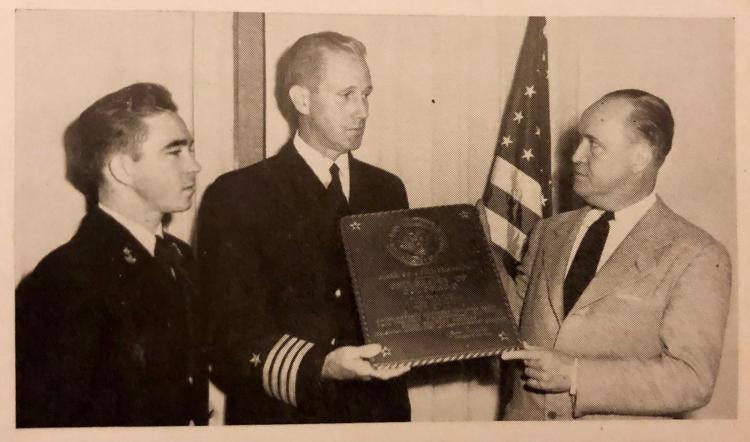 The rediscovered Navy department plaque presented to the University of Colorado Boulder in 1947 by Captain Clifford A. Fines.

President Stearns, Students, Members of the Faculty and Friends of this University:

The memories of most of you can reach back to the years from 1941 through 1945. Some of you students and many of the faculty were here during at least part of that period. You will recall the state of upheaval when suddenly hundreds of men in naval uniforms appeared, when this beautiful campus was changed overnight into a military parade ground, when buildings which for years had listened only to the idle conversation and unending arguments of the students suddenly echoed to military commands and the measured tread of marching men.

The change brought with it problems, serious problems for all. There was a war to be won but the fighting at the front could not win that war unless those forces were backed up by an equal effort here at home. The rapidly expanding Navy needed thousands of young officers and men to operate its complicated equipment aboard ship. The Navy Department called to the educational institutions throughout the country for assistance. The response from the University of Colorado was immediate. You were prepared. The groundwork had been laid when your farsighted and forehanded President arranged for the establishment of an NROTC Unit here in 1941. Your University Authorities and Faculty worked as they knew the necessity of the times required.

The NROTC Unit soon grew into its oversized wartime big brother, the V-12 Program. This program produced line officers here and medical officers from the Denver branch of the University. A radio school set up was soon producing a constant flow of radiomen to operate the Navy’s communication system, that system which forms the vital nerve center of any military operation. Also, there was the Oriental Language School teaching its students to speak Russian, Malay, Chinese and Japanese so they could act as interpreters with our front line forces in the Western Pacific. And in acceptance of the fact that the Navy, as well as the Army of Napoleon, travels on its stomach there was established here a Cooks and Bakers School.

It was loyalty and wholehearted cooperation such as this in support of the Navy Department’s program which enabled the Navy to build up the overwhelming machine which wrecked the German submarine campaign in the Atlantic, which landed and supported our forces in Africa and Europe, and which carried our attack from the West Coast, through the many islands of the Western Pacific to the very shores of Japan.

As the years pass, students and faculty will change, memories will fade, but the Navy desires that the good deeds of this University shall be remembered. I, therefore, in the name of the Commandant of the Twelfth Naval District and for the Navy Department, present the University of Colorado this plaque in recognition of your outstanding services to the United States during World War II.

May this plaque always remind you of the horrors of war, and thus serve as a warning that always you shall use your best judgment so as to influence your government that war will be prevented, but if a war does come let this plaque be an inspiration again to exert to the utmost your strength and your will, to bring that war to a speedy and victorious ending.