“Jendhela provides links to the information sources to preserve credible access to the original data and publishers,” said Danayanti. “It’s an open project in which the data and documentation are publicly available.” 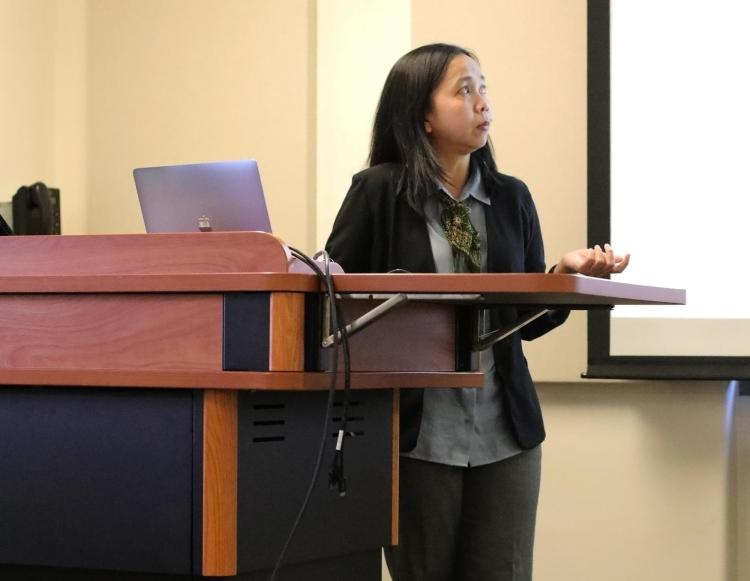 Fellow Eva Danayanti describes the concept of Jendhela during her presentation in April.

“Jendhela” comes from the Sansekerta, or Indonesian, word for “windows.”

The open access portal offers books, articles, photos, videos, and online data records. Danayanti said that Southeast Asia is not known for freedom of the press, despite many organizations zeroing in on this issue in the last several years.

“I started this project by compiling the data information,” said Danayanti. “I went to several websites of organizations [in Southeast Asia], downloaded their data, and then put all of the information on a spreadsheet. I also emailed organizations to ask them if I could use their data.”

She said this work is important for countries that face repression by their governments.

Data from Reporters Without Borders illustrates that most Southeast Asian countries are dealing with a difficult situation in terms of press freedom. Time Magazine’s long-form coverage and a February 2019 story from The Guardian on how press freedom is under assault in Southeast Asia have increased general awareness of the situation.

Danayanti is from a small city in southern Sumatera Island, Indonesia. She began her journalism career in 2004 by developing a news syndication service with friends after a tsunami left Aceh Province in Northern Sumatera in ruins.

She went on to serve as the executive director of the Alliance of Independent Journalists Indonesia for almost six years, where she helped start a journalism school within that organization, as well as the online Independen.id.

Her experience and connections overseas gave Danayanti the opportunity to host other organization’s information using Omeka as a platform and with open access. With over 200 sources on the portal, Danayanti is organizing information by issues like “impunity.” A user can find results after searching for topics such as the killing of journalists.

Danayanti worked with the Libraries’ Chinese and Asian Studies librarian Xiang Li on this fellowship project. Moving forward, Danayanti said that Jendhela welcomes collaborations and contributions to the database, making the database more comprehensive and up-to-date.

The portal will be ready to access in early June 2019.