There is an online library whose visitors are encouraged to wear VR headsets while they read classic texts of Little Red Riding Hood and other fairy tales kept behind closed doors in a climate-controlled room on the 3rd floor of Norlin Library. 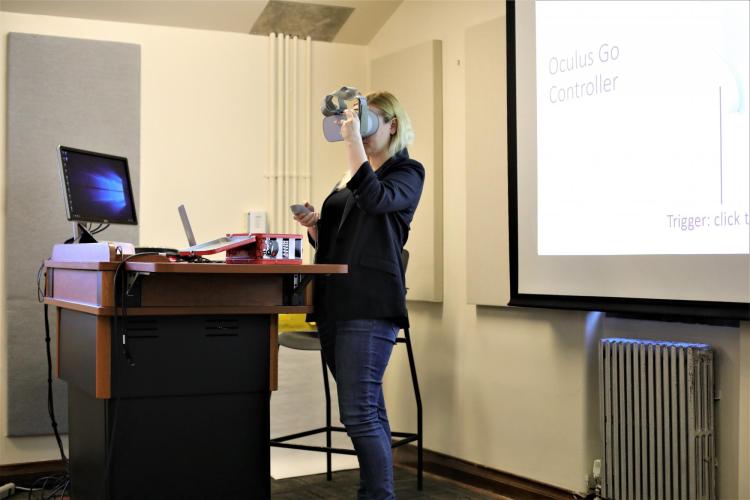 Fellow Julia demonstrates how to use VR goggles during her presentation.

The Special Collections of CU Fairytale Library, SCUFFL is, to Uhr’s knowledge the first virtual reality library of its kind. The idea came to her two years ago while visiting Prague. She was only going to be in the city for two days and wanted to see the Clementinum, a Baroque-style library that dates back to the 16th century and is home to over 20,000 books.

“But it was closed for renovations so I couldn’t go,” said Uhr. “I was like, ‘This would be a good use for VR, to go to a library!’”

“The way libraries arrange information in this three-dimensional visual way where if you're researching a topic, you go to a location, and then all the books that you're going to be interested in are right next to each other, that's something libraries do so much better than the internet,” she said. “It’s important to overlap the online accessibility with the sensible arrangement of information that libraries have.”

It was Uhr’s idea to digitize books that rarely see the light of day. With VR, Uhr says these books are getting a second life. The fairytale theme stemmed from the Libraries’ vast number of fairy tales in Special Collections.

“They’re so pretty,” she said. “They have illustrations and big fonts, which are good for VR.”

As fairytales transcend reality, Uhr’s library is meant to transcend the virtual reality. As visitors wander through the library, walls full of books turn into a forest and a spiral staircase leads to space.

Uhr said that despite VR’s strengths, the technology still has a long way to go. The screen resolution can look pixelated, but Uhr has spent enough time playing with VR by now to know the resolution will soon improve.

“It seemed good to start out with something that works with existing technology and can improve as the hardware improves,” Uhr said.

Uhr worked with the Libraries' head of special collections, archives, and preservation Heather Bowden on the project. There are over 40 digitized fairytale books from the Libraries’ Special Collections now available in SCUFFL, and Uhr doesn’t consider herself even close to finished. She believes VR libraries have the potential to expand beyond our Libraries’ collection.

“I want to keep adding and I also want to open it up to having other people send in their fairytale books to add,” she said. “Other universities have digitized versions of fairytale books that are in the public domain—it could be a cool collaborative project! Either they could use the code, it's all open source, and make their own version of the library or we could have one centralized version with everyone's books in there.”

Look out for Uhr’s VR introductory workshops next fall through the Center for Research Data & Digital Scholarship (CRDDS). Above all else, Uhr wants students to know that this is a platform that is easier to learn than it looks.